Doc Sweeney Drums emerged in the high-end, boutique drum builder’s community only a few short years ago, but it wasn’t long before the Southern California–based shop solidified its spot among the cream of the crop. Doc Sweeney specializes in steam-bent, single-ply, and stave-built snare drums and drum sets. There aren’t too many shops steam-bending drum shells in the US, so seeing one explode onto the scene so quickly caused quite a stir.

We got to check out one of Doc Sweeney’s myrtle snare drums last year as part of our Exotic Wood Snare Drum Roundup. It made quite an impression, so we had to know more. Head craftsman Steven Stretcher ended up making a whole myrtle kit, and was nice enough to ship over the set of single-ply, figured myrtle drums with a matching snare drum for review. The shells we received were: 20″ x 14″, eight-lug bass drum; 13″ x 9″, six-lug mounted tom; 16″ x 14″, eight-lug floor tom; 14″ x 6″, eight-lug snare drum. Check out a demo in the video above, and be sure to wear headphones to fully experience the sound of these drums.

Dubbed “Oregon Dunes” as an ode to where the wood was harvested as well as its incredibly grain figuring, this Doc Sweeney myrtle set is a real stunner, and there’s even more here than meets the eye. Let’s get to it. 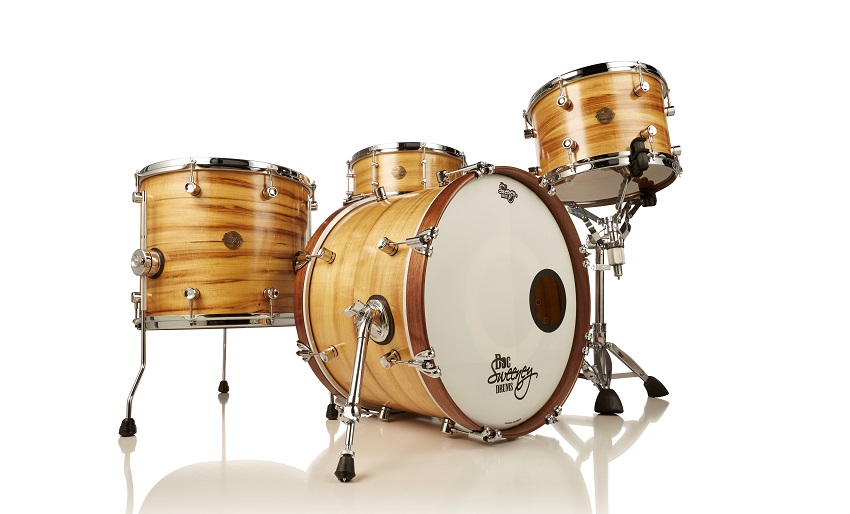 As you can see the photo above, this kit is gorgeous. The satin-finished figured myrtle has a tiger-stripe quality with large streaks of deep cocoa across its pale turmeric body. For contrast, the bass drum is balanced with walnut hoops in the same satin finish. Doc Sweeney’s proprietary chrome-over-aluminum turret lugs are small but stylish, and leave plenty of room to show off the wood’s beautiful figuring.

While the looks really pop on this kit, closer inspection reveals a tremendous attention to detail. The long scarf joints on each shell are smooth to the touch and fairly close to straight (as is expected with solid wood shells). Both toms and the bass drum feature two-piece shells, and the joint between the top and bottom halves looks flawless. In fact, the joint was so clean on the mounted tom, I didn’t even notice that it was a two-piece shell at first.

The 45-degree bearing edges peak toward the outside and have a slight roundover countercut. They’re cut cleanly and even all around with no noticeable flaws. Elsewhere, I didn’t identify any issues with shell roundness.

To the touch, the finish isn’t quite what I expected. Both inside and out, the drums feel slightly tacky and rough, like unbuffed tung oil. Again, it looks great, but there’s a sort of incomplete quality to the feel that kind of surprised me. 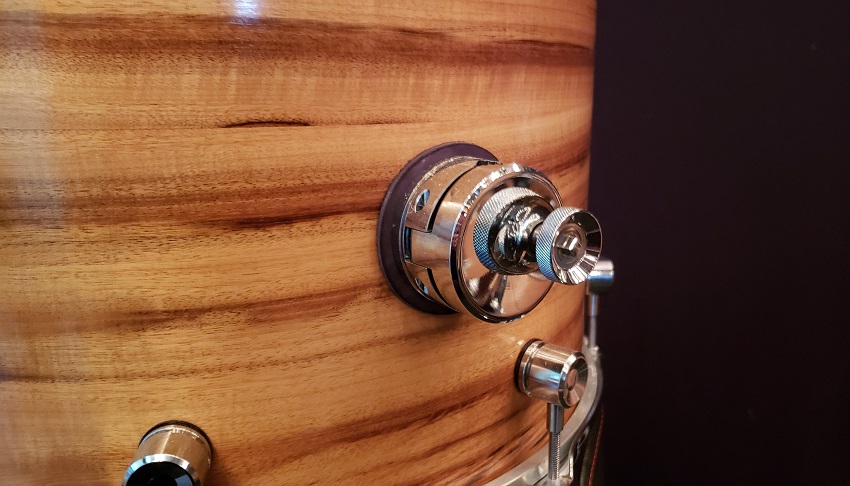 The shell hardware looks great, and it’s also very smartly designed. All lugs have swivel nuts set in fairly large holes, so there’s room to accommodate rod movement. The floor tom brackets maintain a similar theme in shape with the lugs that I think looks great. They also have knurled knobs for tightening and loosening that operate smoothly and feel great in hand.

Finally, the proprietary DS-1 snare throw-off is a real gem. It, too, features the turret shape, with a rotating, vertical three-position toggle. It’s simple, it works well, and it looks really nice.

These drums sound excellent. This is one of the very few drum sets that immediately had me calling drummer friends to come over and hear them. I normally take a couple of days to get acquainted with a review kit and dial in the tuning before asking other drummers to play it, but the Oregon Dunes drums sounded so good right out of the box that I just couldn’t wait.

Myrtle has a Janka hardness rating of 1,270, which is right in the neighborhood of birch. I definitely hear some the qualities I’ve been marketing-programmed to expect from birch, like a punchy upper-middle range presence and healthy lows, but there’s more than just that clean, studio-friendly sound. There’s a roundness to the mid-range and a mellowness in the upper frequencies in the toms and bass drum that feels brand new. And the toms are ludicrously resonant. Maybe that has something to do with the slight roundover edges, or the sticksaver hoops, or maybe there’s something specific in the myrtle that sets it apart. Wherever it’s coming from, it’s beautiful. 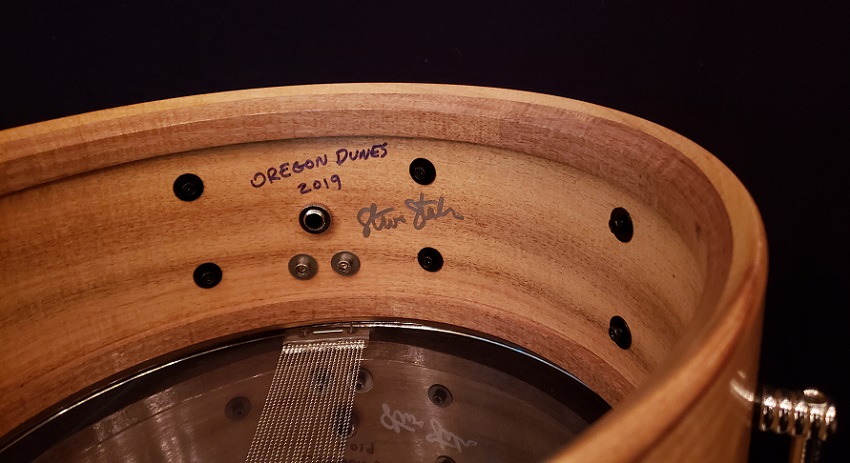 The whole kit tunes up and down excellently. Low tensions bring out an ultra-deep, resonating rumble that really blooms under microphones. Bringing the heads up high pulls out a nice, musical sweetness in the upper range that sounds great in the room, but gives way to lower frequencies when recorded (at least in my “studio”) much more than I expected. I tuned the toms way up to the point of sounding almost pingy in person, but they still had a broad, deep fatness when recorded. That was new to me.

I was surprised by how controlled the bass drum’s response was. It came equipped with an Aquarian Superkick 1 Coated batter and a white Regulator resonant head (also pre-muffled with a port), so I expected a fairly contained, punchy note. But the Dunes bass drum was even more compact in tone than I was prepared for. It’s quick, fat, and thumpy with a rich middle-tone that comes out when tuned high. Were I setting this drum up for myself, I think I’d swap that Regulator out for a single-ply coated head with no port to get a little more tone out of medium tensions in an attempt to match the huge resonance I hear in the toms.

Finally, the 14″ x 6″ Dunes snare drum feels a bit more like a birch drum than the others in this set. It’s got a lot of bite and a controlled, fat center that feels great in high-volume country and rock settings. I was surprised to see it ship with a Power Dotted head, but after taking it to a few rehearsals, I get it. That extra oomph in the middle really gives the drum some guts.

I had a little trouble dialing the wire tension in on this one. I kept bouncing back and forth between overly buzzy with some papery excess noise and way over tight. It took me just a little while to find a comfortable middle between those, but when I did, the drum really came to life. 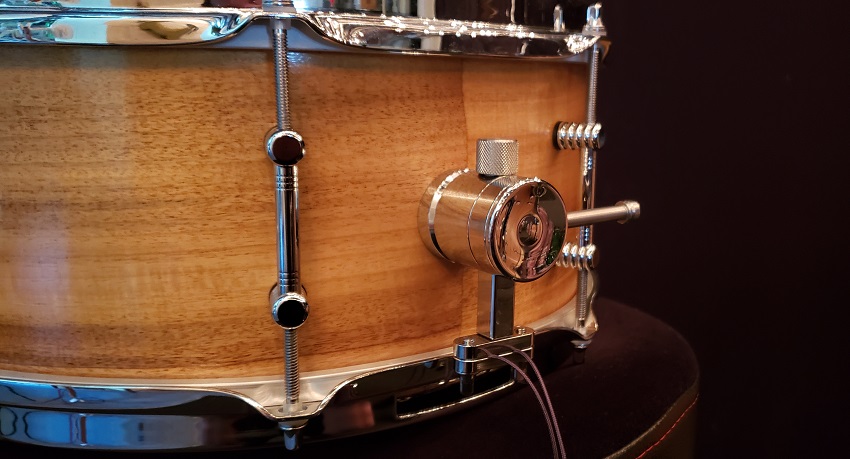 And while I think the snare performed really nicely at medium and high tunings, I’m not sure I loved how it sounded down low. It just kind of flattened out and felt boxy. I think that’s a combination of the dotted head and the controlled mid-range response. With a standard single-ply coated head, I think this drum would handle low tensions with no problem.

Doc Sweeney’s Oregon Dunes kit is like a knife with an ornately jeweled handle and a steel blade sharpened to the highest degree possible. The form is stunning, but the function is truly remarkable. The toms are extremely resonant and somehow simultaneously punchy and soft while the bass drum and snare drum are controlled and cutting. This is, without question, a luxury purchase. The craftsmanship and appearance are very impressive, but the sound backs all of it up. A fine showing by the folks at Doc Sweeney.