If you have access to the Internet, go to an online search engine and enter the words “custom drums.” To say that competition is currently heavy among drum makers is an understatement. Due to the easy availability of inexpensive ready-made maple shells and generic hardware, it seems that anybody with a fat checkbook and a little moxie can start their own drum company these days and one of these is the Spaun Drums Company.

But starting a drum company and running a successful drum company are two very different things. Even the big, established drum makers fight tooth and nail for a piece of the coveted pie. Any business has to turn a profit, and in an industry so crowded with very similar products aimed at a reasonably limited market, it’s not surprising that many of these small companies go belly up at such an alarming rate.

I started noticing this phenomenon in the mid ’90s, when I compared NAMM show directories from three consecutive years and saw that well over half of the small, upstart drum makers who exhibited the first year were gone two years later. With music superstores buying instruments at such low prices and all the intense rivalry in the drum business nowadays, you would have to be either crazy or convinced that you have built a better mousetrap to get into the business of making drums.

The folks at the Spaun Drum Company are probably a little of both. The things that set their drums apart from much of the crowd is that they are well conceived, well made, and deliver much of what they promise. There is nothing extraordinarily fancy about Spaun Drums, but there is an elegance to their simplicity that is somewhat charming.

Owners Brian Spaun and David Pimentel have made some informed choices concerning the construction of their drums. The stylish and functional lugs consist of a small round piece of solid machined brass with a threaded brass insert that receives the tension rod.

While conventional cast lugs hold their inserts in place via a piece of plastic or a spring, the Spaun lug uses a small set screw, not unlike the old Leedy “diamond” lug. This allows the insert to move within the body of the lug while still retaining solidity.

It’s a good alternative to most machined metal lugs, in which the threads are tapped directly into the lug itself, and therefore have less play when it comes time to align the counterhoops with the lugs. I’ve always had a fondness for brass lugs because they have a musical character and dense mass to them that is absent in cast lugs.

Spaun also claims that because the lugs are made from solid stock, there are no air pockets that would deaden the resonance of the shell. Moreover, the lugs are mounted to the 8-ply maple shells with one screw, thereby decreasing shell contact and maximizing sustain.

Well-designed lugs are just one part of the bigger picture. Spaun has also created a double 45° bearing edge, which the company says helps to align the drumhead so that it floats more freely and therefore resonates better. After working with the drums for more than a month, I would have to agree that the double cut bearing edge is a great idea, especially for toms.

When I put new heads on the toms, they slipped right on and tuned up in a jiffy. They were also easy to tune to an actual note. Not only did they hold their pitch, they projected wonderfully as well.

The same kit without the black nickel retails for around $3,100, putting it well below the average retail price of other custom kits on the market.

I first used the kit while drum-teching for a recording session. The drummer was a famous English session player who endorses another drum company, but due to logistics, didn’t have his kit on hand at the time. He really enjoyed the drums and especially liked the kick drum.

When I set the kit up, I noticed the kick drum was “studio ready.” In other words, it had a well-defined attack that wasn’t out of control or overwhelming. With the supplied Evans head, it was focused and dry, even without any muffling. I changed the head to a coated G1 for another session and got much more sustain out of the drum, which I personally prefer.

This drum pushes a lot of air, and while using it at another studio for an upcoming microphone review, it pushed so much air that it blew the supposedly unbreakable ribbon on the mike. What I really loved was the presence of the kick drum. It was easy to dig into and gave back plenty of low-end thud and round tone.

As I mentioned before, the toms were the real stars of the drum kit. The thin maple shells, combined with the fairly sharp bearing edges produced a wonderful tone that was reminiscent of the 3-ply Gretsch toms from the 1950s. They sounded fantastic on another drum tech gig for a hardcore band.

Even though the drummer was fairly inexperienced and didn’t hit with great authority, the producer loved the kit and was especially taken with the toms. We tested different heads and the drums sounded outstanding with each set we used. We settled on clear Emperors, which gave the toms a big rock sound without killing their resonance. I sat in the studio while the band took a break and played some syncopated patterns on the toms. For about half an hour, I was in drum heaven.

The 13″ x 5 1/2″ snare drum wasn’t as impressive as the rest of the kit. Don’t get me wrong – the Spaun drum – with its Nickel Drumworks strainer and nicely beveled snare bed – is certainly well designed and constructed. But there was nothing noteworthy to make this drum stand out from snare drums I’ve played from other companies, which are all made from the same Keller maple shells as Spaun’s.

The drum certainly sounded fine, but had no really outstanding characteristics that made me stand up and pay attention. I would have liked to have tried a deeper snare, say, a 14″ x 6 1/2″, to see if the benefits of a fairly thin-ply shell would have paid off in a husky deep tone. Perhaps Spaun should experiment with thicker shells and different types of bearing edges to distinguish themselves from other drums on the market.

Snare drum notwithstanding, Spaun drums have a look to them that could be described as classically simple. The finish on the drums I tested was neither ostentatious nor overblown. The pattern of the maple was highlighted by the satin quality of the finish and both the outer and inner plies of the shells were flawless, save for one small blemish on the 12” tom. The black nickel plating was high quality as was the buffing on the brass lugs.

All the vent holes have a classy brass grommet in them. The Spaun badge, though rather large, is nicely engraved black nickel over brass.

All in all, Spaun drums are a good solid investment, especially given their low retail price and fine handcrafted construction. What you get for your money is a great-sounding, great-looking kit that is as versatile and solidly built as other kits that cost a thousand dollars more. You also get to help one of the little guys. Don’t forget, before there were the huge music conglomerates of today, there were guys named Ludwig, Slingerland, Gretsch, and others who had a dream that one day their names would become synonymous with quality drums. 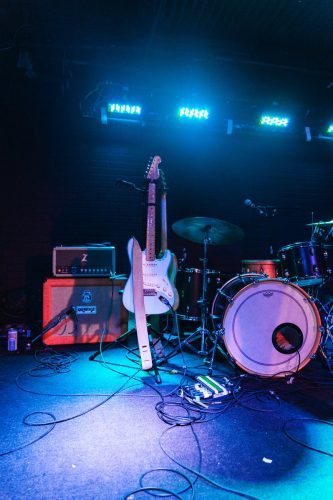