#WCW: Meet Kalonica Nicx, the 13-Year-Old Drummer with Three Hit Like A Girl Championships Under Her Belt

Kalonica Nicx is a 13-year-old drummer from Indonesia who’s been playing drums since she was six years old. She has won Hit Like A Girl in three separate categories: Most recently she won the under-18 Marching Percussion category, and prior to that, she has won the World Percussion and Champion Drumset categories.

Aside from competing among incredible girl drummers around the world, Kalonica also plays snare in Marching Band Locomotive Drumline, and was recently asked to join a virtual collaboration of young musicians around the globe. 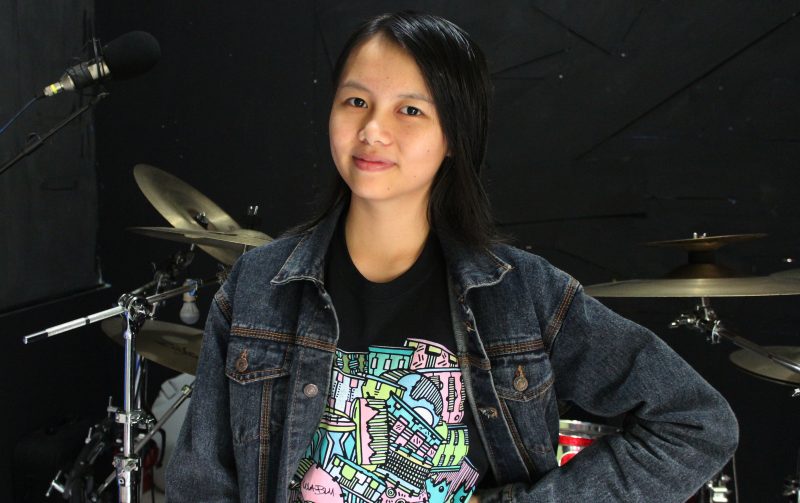 Most of my drum gear has come from prizes I got from winning Hit Like A Girl in 2015 (in the drum set category) and the World Percussion category in 2017.  I’m still waiting for the Marching Percussion 2018 prize to come.

You have three Hit Like A Girl wins under your belt, in three different categories! That’s quite impressive. How have you achieved mastery in such a wide variety of percussion fields at such a young age?

After I won the HLAG grand prize for drum set in the under-18 category, I could only enter other categories, so I did! I just wanted to try and give it everything I had.

For World Percussion, I love to play timbales, so I practiced and practiced playing solo, and that really paid off.

For the Marching contest, I already had experience there. I have been a snare drummer in my elementary school since fourth grade. When I was in the sixth grade, I was chosen to be the center snare drummer for a national TV commercial, so that gave me the confidence to keep going.

But also, special thanks goes to my father, who believed in me and taught me that I could be a Hit Like A Girl champion. He’s always by my side, has taught me many things, and we fight together.

I continue to play snare for Marching Band Locomotive Drumline.

For drum set, sometimes I do session work, and recently I was also asked to join virtual collaboration of young musicians around the globe. Two videos have already been released.

When I was six years old, I liked following my dad to his music studio and watching him play and banging all around. Eventually I asked my dad to teach me play, and he did! He said he was surprised by how fast I learned.

We like to have fun jamming as a family — I play drums, dad plays guitar, and my little brother plays piano. We do covers and make some original creations.

I practice daily because my life is drums, percussion, and music.

For now, I still have many things to learn, and need to gain more experiences. One day, after I’ve reached the level of being a professional international drummer, then maybe I can answer this.

Drummers and musicians in general have such love and dedication to their craft, but I think sometimes the art form can be devalued. It’s hard to make a living as a drummer, even if we work very hard and at all hours. It would be nice if we could get more respect for making beautiful music.

I just like to drums and make music. Success to me means being happy, comfortable, allowed to be myself, to keep improving with all my heart. If I’m learning, growing, and being original, then that is success to me.

Just do the best and let God do the rest.

Whenever I get inspirations, I record myself. I think of making music as painting a scene, to make the sounds more colorful and beautiful and alive.

Failure is ordinary. We all fail because we’re all human. Just keep smiling and keep learning.

Where else to find Kalonica