The Return Of Sakae: A Sneak Peek

The drum industry like Sakae drums is filled with classic company names whose fortunes waxed and waned over time. Ludwig was the biggest drum company in the wake of the British invasion but was later caught by upstarts from Japan such as Tama, Pearl, and Yamaha. Those brands were later matched by DW Drums. Ludwig bounced back when a new generation discovered them in the ’90s. It’s a heroic name in drums that will forever be associated with some of the greatest artists of all time.

And, it’s a similar story with Gretsch, a storied jazz brand that fell in sales during the 1980s and ’90s before being reborn through the Gretsch family’s collaborations with Fender, Kaman Music, and now DW Drums. And, then there are the classic brands that rose and fell and seemed to never get back up.  Rogers was gone from the market for decades, only to begin a comeback in the last three years. And the Slingerland brand name has died and threatened to come back more times than a zombie in a resurrection play. Slingerland’s future is still unknown, it’s fate tied up in the wake of the Gibson bankruptcy.

Sakae is not as venerable as those other brands. But it did have a remarkable past as a former supplier to Yamaha. As a standalone company it stopped making drums in 2017 and declared bankruptcy in Tokyo this past May. I expected the company to be reborn in some form in the future, but when I walked into the Korg USA booth at the recent NAMM show in Anaheim and saw a new Sakae prototype, I was still surprised. What, I wondered, is really going on?

A little backstory is in order. Beginning in the late ’60s Sakae became a builder for Yamaha. For 40 years Sakae made most of Yamaha’s high-end drums, including the legendary Recording Custom. But beginning in 1997 there were hints that this relationship might not last until death do us part. That was when Yamaha began making  some drums at their factory in Hangzhou, China.

By 2009 there were rumbles that Yamaha and Sakae were breaking up for good. And, in 2013 Yamaha announced that many of its higher-end drums, including Recording Custom, would no longer be available. Instead the company ended all relations with Sakae and began working on rolling out new lines such as Studio Custom and Tour Custom, all made in China. This led to a lot of industry gossip and gnashing of teeth in the drum forums.

A public, exquisitely heartfelt letter from Eizo Nakata, grandson of the founder and President of Sakae, announced that the company would go it alone, and be committed to making the highest-quality pro-level drums. And that is what happened. The finishes on Sakae’s kits were as beautiful as anything you’d find in the best furniture stores. Several artists, including Yamaha star and Smashing Pumpkins drummer Jimmy Chamberlin, became Sakae endorsers. 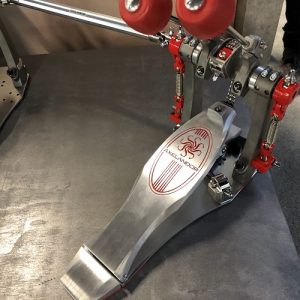 But in hindsight the company vastly underestimated what it would take  to launch the company successfully on a global basis. By mid-2017 it was becoming clear that Sakae was in deep distress. The company had hoped that their reputation for quality in their Yamaha drums would translate into bigger sales for Sakae. That was not to be at the time. Yamaha, of course, went on to expand its line further with more drums made at its immaculate factory in China. Only the $15,000 PHX kits are still made in Japan. And Jimmy Chamberlin made a heralded return to the company in February of 2018. 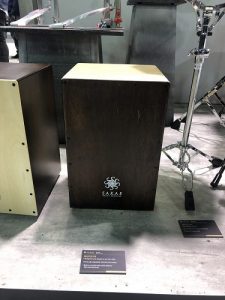 Sakae’s venturing into the percussion market with a new cajon line, debuted at NAMM 2019

By May of 2018 it was all over and Sakae was out of business. Shortly thereafter, Korg Inc., bought the trademark. What I didn’t know at the time is that they also engaged Sakae’s top designer to help them rebuild the line. The fruit of that collaboration was what was on display at the KorgUSA booth at NAMM. Korg Inc. will produce drums under the Sakae name.

KorgUSA will distribute them in the US. The prototype of an Almighty-style kit, which they are calling the “Evolved” was constructed with maple shells. The drums were built in Taiwan, which is about as close as one gets to Japan in terms of Asia-based drum-building reputation. The company also showed a cajon with a Sakae logo, and  a new pedal design, which we’ll dig into at a later date.

I asked sales manager Jeff Shreiner about the possibilities for the new Sakae. After all, Korg has some experience in this kind of rebuilding project. They became the Crush distributor after that company fell on hard times, reintroducing the drums in 2017. Since then Korg has been slowly adding new model options to the Crush line. 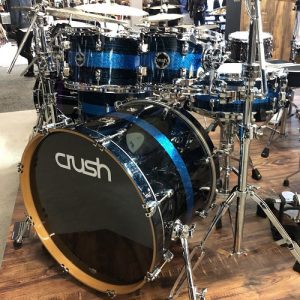 Korg has some experience in this kind of rebuilding project. They became the Crush distributor after that company fell on hard times, reintroducing the drums in 2017. Pictured here is a new Crush kit at NAMM 2019

Jeff  says that the company is likely to follow this same path, cautiously introducing new products slowly because they want to get it right. The first kits may be available in the fall. Despite the obstacles any new drum company faces, especially one making high-end drums, Sakae now has a strong distributor backing them, and that reputation for quality developed during their brief tenure as an independent brand. The  drummers who bought Sakae drums loved them, and some important artists played them. That’s a reservoir of goodwill to tap into into when the new drums arrive.