No matter how you play it, that 808 kick sound is up there with the most recorded bass drums in history. Now it’s being honored along with six other innovations with induction into the NAMM TECnology Hall of Fame (TECHOF).

“Roland’s TR-808 programmable drum machine became part of the foundation of music movements in hip-hop, rap and electronica,” said TECnology Hall of Fame Director George Petersen in a press release. The designations, which were voted on by a panel of audio experts, including authors, educators, engineers, and other professionals, honors audio products and innovations that have made a significant contribution to the advancement of audio technology and production. 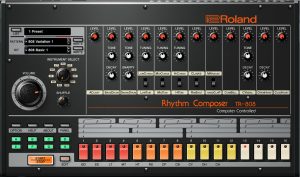 “Every one of these innovations made a major contribution to how sound is created and reproduced—even years after their debut,” said Petersen. “In fact, all of these technologies are still in use every day.”

The TR-808 was introduced in 1980 and was a major part of the popularization of electronic drum sounds in a wide variety of genres. Its user-friendly interface allowed producers and musicians to program and store beats and patterns. It remained popular with a core audience of hip-hop, electronic, and R&B producers, and today original units can fetch around $4,000 on the resale market (after originally being available for $1,200 in 1980).

Inductees to the TECnology Hall of Fame are selected by nearly 50 audio experts and will be officially inducted Saturday, Jan. 18, 2020 at 4PM in the NAMM Member Center inside the Anaheim Convention Center. Past honorees have ranged from the early Edison cylinder recorders, to microphone and sound system designs, and from groundbreaking tape recording devices, to products tied to key developments in digital audio workstations and software plug-ins.

Marvin Gaye figured it out in “Sexual Healing”

Check out the machine in action: