Earlier this year, the heads at Sabian and A&F Drum Co. teased a new partnership with the aim of producing fresh, unorthodox instruments drawing from the collective expertise and innovation of both companies. That partnership emerged as an independent brand called Ankh which released its debut products only a few months ago in a collection of uniquely designed hi-hat cymbals.

Available only in limited production limited to 75 units per batch, the Ankh hi-hats are scarce enough to come with some built-in exclusivity and mystique. Thankfully they’re not so exclusive that we couldn’t get our hands a few pairs. We found them to be incredibly fascinating instruments that fit into a pretty specific space. Let’s get into it.

The Ankh hi-hats are unlike just about anything else on the market today. Modeled in part after the old low-boy hats of the 1920s, all of the cymbals feature flying saucer–type designs with jumbo bells and short, fairly low-profile bows. The bells are large enough, in fact, that they can be used as actual hats, like for your head. (It’s about time somebody added some legitimacy to that sham of moniker after all these years.)

The other really interesting element in the Ankh hat group is that four of the cymbals are made of brass. Most modern cymbals are made with a bronze alloy, but the brass offered a special appeal for this project. When I spoke with A&F President Ramy Antoun about why he and Sabian R&D Director Mark Love wanted to create a set of brass cymbals, he said, “Brass is what we made our first drum ever out of, and it’s our top selling drum material.” 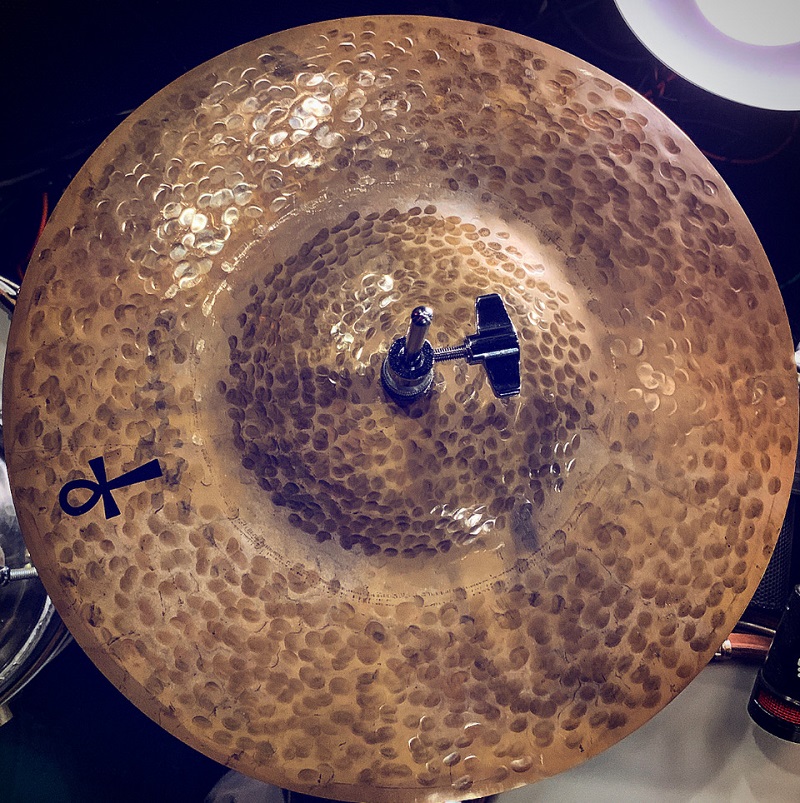 Brass cymbals are not a wholly new instrument. There are plenty of entry level cymbals and toy drum instruments that use brass as their base. What sets these cymbals apart is that they are tempered, formed, and hammered into shape. Basically, that means they’re the first modern brass cymbals designed to be used as professional instruments.

Ankh cymbals are available in 14” thin or medium, and 16” thin or medium individual pieces, as well as a 16” pair of bronze hats that includes a thin and medium combo. The brass units are unpolished and heavily hammered throughout the entire cymbal body, while the bronze cymbals have lathed and polished bows and raw bells somewhat similar to Sabian’s HHX models.

Let’s go ahead and dive in with Ankh’s bronze hats since, among this group, these are probably the most familiar in sound and feel. As mentioned above, these have a bit of the HHX look to them, but that oversized raw bell creates a very different vibe.

With the thinner cymbal on top, the B20 Ankhs have a trashy, chunky bite that sounds a bit like a hyper-compressed sample of a pair of thin vintage hats. Those big bells and the 16” size combine to offer deep, thick notes with bursts of warm buzz below the attack.

The hats are incredibly tight when played on the bow or bell with the stick tip. They’re on the dry side with a hint of ting, especially as you play higher up and onto the bell body. Played lightly with the stick shoulder at the cymbals’ edge, they have a warmed up, fuzzy tsh sound that feels great under a straight-eighths Steve Jordan thing.

Opening up the hats lets out a dry, mellow wah, with very little upper and mid-range wash. They don’t have much spread, which makes them record beautifully, but as a side effect they struggle a bit to project in high volume situations.

But I don’t think we should be looking at these hats as traditional, multi-purpose instruments. The bronze Ankhs do a very specific thing, and the brass models double down on that niche. They would probably fit best in mid- to low-volume situations where a trashier, mellower sound would be useful.

GETTING DOWN TO BRASS HATS

Here’s where things get really interesting. The brass Ankh hi-hats are unlike anything else I’ve played before. They have a similar thing to the bronze Ankhs going on, but it’s like all of those characteristics are cranked up to the max here.

Paired with the thinner model on top, both the 14” and 16” hats are dusty, complex, and crunchy. They also seem happiest when played on the edge where they’re fatter and chunkier. Opening up either pair delivers a drier, gong-ish bwah that sounds a bit like distant highway noise.

Interestingly, the bells don’t scale from the 14” to 16” models. The 14” bells are almost as big as those on the 16, so the 14 plays with an even tighter, punchier attack. I think both pairs kind of split the difference between heavily patinaed vintage hats, and Sabian’s Chris Dave–inspired Sick Hats. There’s some of that buzzing, digital bark, but it’s balanced by a mellowness around the edge.

Flipping the models to put the medium cymbals on top builds a bit of low hum into the wash, and adds some tink to the stick attack. I enjoyed that orientation most on the 16” hats, but I don’t think I would often opt for it instead of the thin-on-top orientation in any setting. I just found the short sh-type response of the conventional set up more appealing.

Foot chicks are a little mellow for my preference, but the sounds from both pairs are beautiful on their own. The warm chup sound sits a good bit below ride cymbal wash and make for beautiful accents for low- and mid-volume singer-songwriter settings.

That brings me back to expectations. As I said before, these hats do a very specific thing. I wouldn’t call them “one note” instruments—they go a good bit beyond that—but they wouldn’t be my choice for a main pair of hats. I would happily reach for any of the Ankh hats on a gig where mellow, more exploratory sounds were preferred. I think these hats would kill in low-volume funk or indie situations, as well as modern jazz, electronic music, and singer-songwriter sets where delicate, specific sounds are a must. And beyond that, I thought all of these hats sounded exquisite under microphones. That’s probably where they would be the most valuable.

Overall, I found this initial collaboration to be tremendously exciting. These are truly unique instruments inspired by some of the most creative minds in this industry. Hats off—or in this case, hats on—to the teams at Sabian and A&F.

5 Possibilities From The Sabian-A&F Collaboration