Think about the last time you practiced or played a gig. I’ll bet most of your fills moved in either a clockwise motion, starting on your snare and descending across your toms, or a pulling motion, starting on your toms and moving toward your snare. If I guessed correctly, believe me — I’m not a cheesy psychic. It’s just that these are the easiest, drum exercises and most common ways drummers move around the kit.

Many of our bread-and-butter fills employ these motions, so they become deeply ingrained in our muscle memory, and feel familiar and, well, safe.

But it’s so much better to expand our creative options by incorporating other motions and shapes into our vocabulary. It’s one of the tricks that separates the world’s best players from the rest of us. Learning to play new motions and melodies on the kit is similar to a guitarist practicing scale and arpeggio runs.

As you develop this idea, you’ll begin to see new shapes on the set that were once invisible to you. Better yet, you can take an old idea and play it in a new shape: Eureka, you’ve found a fresh idea.

Most of the following exercises use single-stroke patterns, though we will explore how double strokes can also be useful ways to change directions or create a new shape. Integrating your bass drum with these ideas will open up a world of new linear patterns, and buy you a moment’s time when playing them at Mach 1.

The following exercises are all fun to learn and play. If you find yourself in a rut, playing a few as a warm-up can quickly add inspiration to your practice session. Drum teachers can use them to motivate students to practice and learn some rudiments.

Because every drummer’s kit is different, and is often dictated by the size of our wallets or vehicles, I limited this to a standard two up/one down 5-piece set. But these ideas can be easily adapted to any size kit, and played on cymbals, too. That’s the idea — experiment with them and see where they take you.

Exercises For Increasing Your Dexterity

How many times have you tried something new, which seemed impossible and awkward at first, and just gave up on it? Sometimes the only thing keeping you from success is a trick or two that you simply haven’t internalized. Once you do, you’re over that hurdle.

Moving back and forth from left to right on the kit can be awkward, especially at faster speeds, but you can use a couple strategies to make it much easier. When moving toward the right, lead with your right hand. When moving to the left, lead with your left hand. Yes, the concept is simple — but doing it is never as easy. Most right-handed drummers struggle when leading with their left hand or moving toward the left on their kits, and many give up too soon.

Here’s another trick many great drummers use when they rip around their kits in all directions: You don’t always need to play an even number of notes when moving across your toms. Let that sink in for a second. I’d wager that you usually play groups of two, four, or six notes as you move across your toms. The secret to flying around the kit, used by drummers like Chris Coleman, Mike Mangini, Tony Royster Jr., and Terry Bozzio, is that odd numbers of notes facilitate direction changes, especially tricky lateral ones.

I’m going to present a wide variety of patterns in this workshop that, practiced over a period of months, will improve your ability to move in new ways, and help you create some interesting phrases, while improving your coordination. Use these as the basis for new fill ideas or simply as warm-up patterns.

Triplets naturally lend themselves to this idea, so we begin with a few patterns that incorporate these two outwardly simple concepts. While they are written without dynamics, some of these motions will naturally emphasize certain notes, causing patterns that look similar on paper to sound very different from one another.

We begin by moving back and forth, from right to left, between the snare and floor tom in Ex. 1. Play this pattern until it begins to feel natural and you don’t have to concentrate too hard on the number of notes played on each drum. As you practice this exercise, make yourself feel centered on your throne, and twist your torso to one side or the other as little as possible.

Exs. 2 and 3 are permutations of the first idea. Notice that the third pattern conveniently starts on the snare, but still uses the same concept to move between the snare and floor tom. I’d suggest counting these patterns, in order to remain aware of where the beats fall in the pulse. If you don’t, it’s easy to lose your bearings and simply find yourself playing Ex. 1 again.

You don’t have to limit yourself to playing only groups of three notes. Exs. 4 and 5 show other ways to use odd-numbered phrases. We’re still playing triplets in Ex. 6, only they’re phrased in even groups of four notes, creating a four-over-three polyrhythmic melody.

Exs. 7, 8, and 9 should help you become comfortable moving diagonally, or forward and backward, from the floor tom to your mounted toms.

We incorporate the snare and all three toms in short two-bar solos for Exs. 10, 11, and 12, in which you should think of the floor tom as the “home base,” since you return to it in each example.

The next group of ideas moves the home base to the snare drum. Exs. 13 and 14 begin on the floor tom, but you can just as easily begin these on the third beat to vary the starting point. Ex. 15 is a two-measure warmup incorporating both previous exercises. 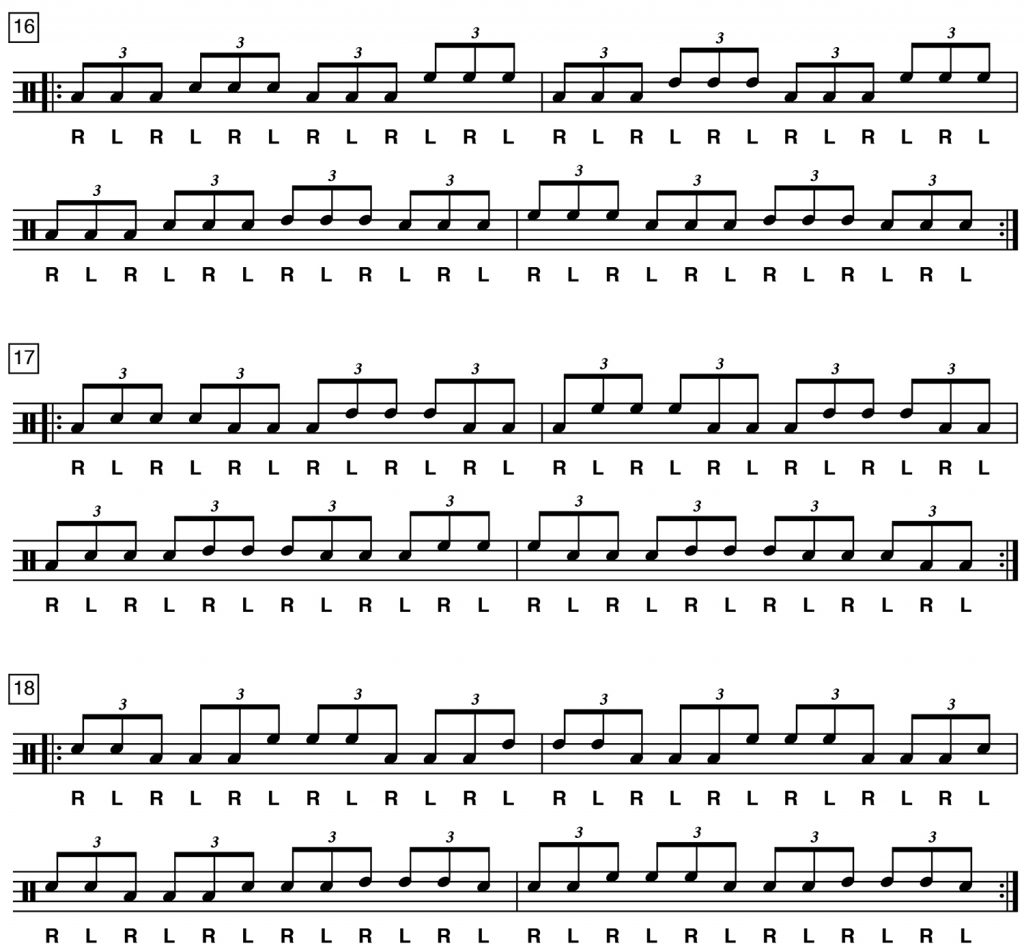 Now that you’re getting the hang of this, let’s tackle some trickier solo patterns. In the first line of Ex. 16, the floor tom is once again used as the home base while you move around the kit, but in the second line, the snare takes over that role. Exs. 17 and 18 use the permutations from Exs. 2 and 3, and shift the starting note to a new position. Most of the previous patterns in this workshop can be easily adapted to sixteenth-notes. Exs. 27–32 feature three- and five-note phrases to get started, and Exs. 33 and 34 include the snare and all three toms.

Rudimental stickings like paradiddles, double paradiddles, and paradiddle-diddles provide another way to move efficiently around the set while using an even number of notes. We continue to use the idea of leading with the left hand when moving to the left and vice versa. 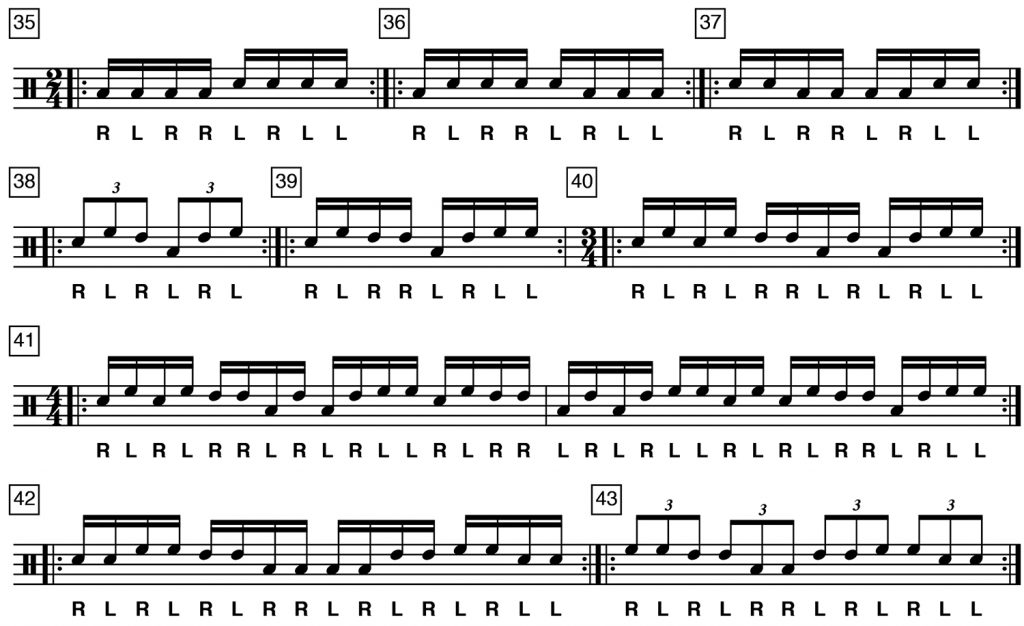 Exs. 35, 36, and 37 use a paradiddle sticking to create patterns that are reminiscent of Exs. 1, 2, and 3. Ex. 38 is a fun pattern that we’ll use as the basis to create a variety of other patterns, such as Ex. 39, which is a paradiddle version of Ex. 38. It further illustrates how you can take just about any of the triplet patterns presented here and morph them into something new by using a paradiddle. Ex. 40 applies a double paradiddle to the same idea presented in Ex. 38.

I admit that Ex. 41 looks a little insane, but it’s not very difficult once you understand it’s just two double paradiddles and a paradiddle, reversing direction whenever you start a new rudiment.

Exs. 42 and 43 are pretty simple compared to some of the previous examples, but help you move down and up your kit seamlessly by playing a double stroke at each end of the pattern. I’ve seen lots of gospel drummers use these at frightening speeds.

Any pattern in this article can be transformed into a linear fill by adding or replacing one or more notes with either of your feet. Since it’s easier to hear a loud bass drum hit than quieter hi-hat notes, especially at faster tempos, I’ll focus on the kick. We’ll use Ex. 38 as the melodic shape for all of these ideas. 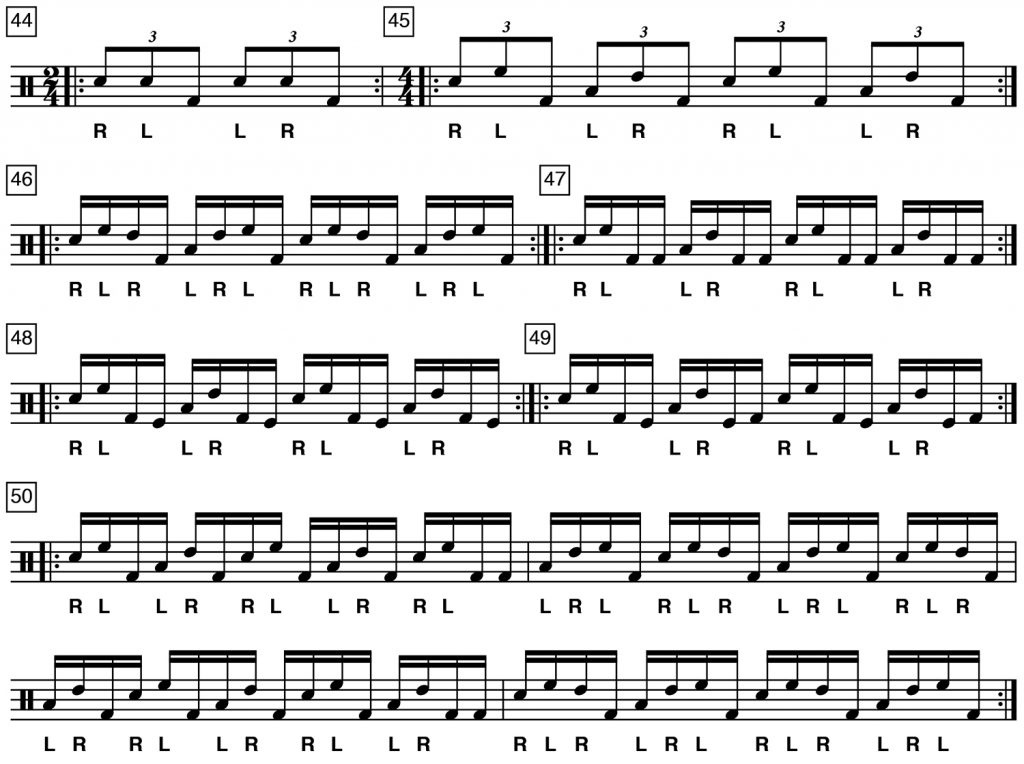 If you play alternating triplets with your hands and substitute a bass drum for the third partial of each triplet, you get Ex. 44. Now, take that pattern and apply it to the melody in Ex. 38, and the result is Ex 45.

A bass drum note is added to each half of Ex. 38 to create the pair of four-note phrases in Ex. 46. You can also substitute a bass drum hit for the third note from each phrase of Ex. 46 to create Ex. 47.

This pattern can easily be adapted to double bass kits by splitting the bass drum notes between your feet, as we do in Ex. 48. In Ex. 49, the order your feet play follows the order of your hands, so it’s played right foot/left foot and then left foot/right foot. We conclude with the four-bar linear solo in Ex. 50, which combines most of these ideas.

After spending a few hours with these patterns, you should notice that you’re not only getting more flexible and fluid while moving around the kit, but also have an easier time coming up with new ideas of your own. So, go grab your sticks and have some fun!