Panic! At The Disco’s Dan Pawlovich is Pushing Boundaries with 3D-Printed Snare Drums

There’s a million ways to customize a snare these days, but that wasn’t good enough for Panic! At The Disco drummer Dan Pawlovich. So, he 3D-printed his own snare drum, right down to the lugs.

It didn’t matter to him that this had never been done before. “As a performer you push the boundaries of what your instrument can do,” says the hard-hitting drummer, who suggested that this may become the next wave of drum customization. “It’s just inevitable that we’re going to see these out there more often.” 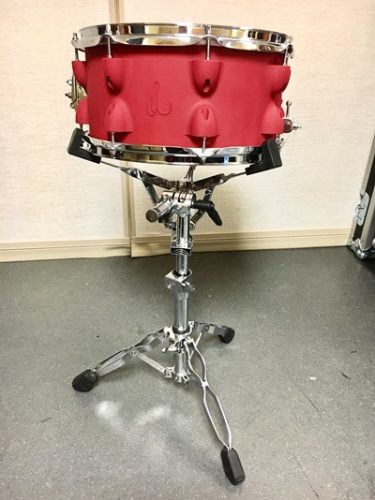 Pawlovich has been playing with Panic! At The Disco for a little over six years now. If you caught the band on their Death Of A Bachelor tour or anytime since then, you’ve heard this snare live. The 14” x 7” red beauty is made of a specialized plastic, with lugs as a seamless part of the shell. The only four holes are for the snare throw/butt. There’s no glue, screws, or anything else holding the parts of the shell together—it’s all one piece. The hoop, snare wires and throw/butt, hoops, and heads were not part of the 3-D printing.

Now, plastic drums are nothing new—we’ve all seen and probably even played acrylic drums like Ludwig Vistalites, Fibes, Pearl Crystal Beat, or DW Design Series Acrylic—but those all have a distinct sound and feel. Pawlovich’s 3D-printed snare drums stand out in that they don’t stand out. “The fact that a drum made mostly out of nylon plastic sounds like a traditional drum is kind of incredible to me,” he says.

So, how does it sound? Well, he recorded the 3D-printed snare and a Noble & Cooley maple (his previous favorite), then asked his drum tech for an unbiased opinion. The tech was unable to determine which was which, since they both sounded great. When he got it under microphones, he says, his front-of-house engineer immediately commented, “What’s that snare? It Sounds great!”

What an absolute honor! None other than @officialdaveweckl showing us what this thing can really do! #werenotworthywerenotworthy

Creating a drum like this is no easy feat, technically speaking. Not only does it have to sound good, it has to withstand the punishment of touring. That includes countless hours of practice, getting beaten for two-plus hours on a nightly basis, being cased up and tossed around by airline baggage handlers, and even the occasional beverage spilling disaster. There’s not only the design to think about, but material and construction method also play big parts of the finished product.

“Can you take a 3D file, push print, and get a product? Sure, but getting a good part isn’t as simple as that,” says Lewis Simms of Stratasys Direct Manufacturing, the company that 3D printed the snare drum shells. Stratasys Direct has worked with Pawlovich for more than three years on the project. “What could be perceived as simple geometry is not, and it requires expertise and accuracy.”

There are other 3D-printed instruments—3Dvarius’s electric violins, for one—and a handful of custom instruments with 3D-printed pieces. But unless you’re making a song flute for your third-grade classroom and don’t care about the sound so much, a completely acoustic instrument is not easy to make.

The dimensions of a snare drum aren’t that complicated—it’s a cylinder that’s 14” in diameter and 7” deep. But then there’s the reinforcement ring on top and bottom. And the real kicker was to get the lugs printed seamlessly as part of the shell. That involves some serious structural integrity if it’s going to hold down two hoops at high tension, and building the instrument without that innovation wasn’t an option.

Three years after he got his first kit, at around age 15, Pawlovich began thinking about how to improve upon the basic design of drums. “One of the ways that I thought would be pretty drastic was, could the lugs be part of the shell? … It seemed really improbable, or not really economical.” But no matter how off-the-wall it seemed, he kept coming back to that idea.

Then one day while stumbling down a YouTube wormhole, he came across videos of 3D printing. “This was the moment in my head where the light went on and I thought, This might be the thing that makes all this possible.” He started chatting online with a CAD designer about five years ago, and two-and-a-half ago received his first 3D-printed snare drum.

@gotninelives pointed out I haven’t shown the inside of @3ddrums yet. Here it is, totally devoid of any lug screws. Because the lugs are part of the shell, there’s no need for any mounting hardware to choke the shell resonance. There are a few nuts and bolts for the snare mounts, but even the holes for these are created during the print process. Thanks for the suggestion, Casey! #patentpending ?: @gotninelives

Since then, he’s had four more made, in different sizes and materials. One is the selective laser sintering (SLS) printing method, which involves powerful lasers fusing nylon powdered material in the shape of the print, layer by layer. What you probably care about most here is that this combination sounds like more traditional drum—specifically, an 8-ply maple snare.

Then there’s fused deposition modeling, or FDM, which is the more widely known printer nozzle head-style (like a Makerbot home 3D printer) that was created by Stratasys. The materials are nylon and carbon fiber deposits. “That one reminds me of a 15-ply specialty shell,” says Pawlovich. “It’s the same drum—they’re all made out of plastic composites—but all three sound completely different.”

Then there’s acrylonitrile styrene acrylate, or ASA. Striking the bare shell of this one yields a strong fundamental tone. “That one had more of the feel and tonality of something like a Black Beauty,” says Pawlovich. “It might not be as bright and crisp as an actual metal shell, but here we are with this plastic shell that has properties even remotely close to a nickel-over-brass shell.”  His latest creation—the fifth iteration of the 3D printed shell—is a 5.5”-deep ASA snare drum. This one’s black, perhaps to contrast the red of his first creation. (Or perhaps so he can secretly say he made his own “black beauty” snare.)

Thanks to a generous proposal from @stratasysdirectmanufacturing I’m now able to test the exact same drum, but using various print methods and materials. From the top: SLS Nylon has mostly traditional wooden shell attributes. While FDM Nylon actually reminds me of brass shell snare drums! And FDM Carbon Fiber sounds like a mix between aluminum and a thicker wooden shell. For only the 2nd design, the results are very inspiring! #3ddrums

Despite the successful innovation, and getting a lot of high-profile attention since showing off the first iteration at NAMM in 2018, Pawlovich is not looking to start a new boutique drum business just yet. “I see us on the ground floor right now,” says Pawlovich. “We’ve shown that not only can this idea be done, but it also sounds great and can compete and stand on its own next to a traditional drum design.”