Dust off your spiked collar and black boots—Ministry is bringing a taste of the old days with a tour including KMFDM and Front Line Assembly in honor of the 30th anniversary of their album, “The Mind Is A Terrible Thing To Taste.”

“’The Mind Is A Terrible Thing To Taste’ just turned 30. Who knew we’d still be around to see this day,” said Jourgensen in a press release. “But since we are alive and kicking, we figured we’d hop in the way-back machine and recreate the infamous original tour with KMFDM, and add in Front Line Assembly as well.”

“The Mind Is A Terrible Thing To Taste” was released in November 1989 and includes “Thieves,” “Burning Inside,” and “So What.” The record helped establish the powerful, aggressive sound that would become associated with the industrial music genre.

The Industrial Strength tour kicks off July 1 in Seattle and ends August 1 in San Francisco. Tickets go on sale Friday, January 17 at 10 AM local time at ministryband.com. 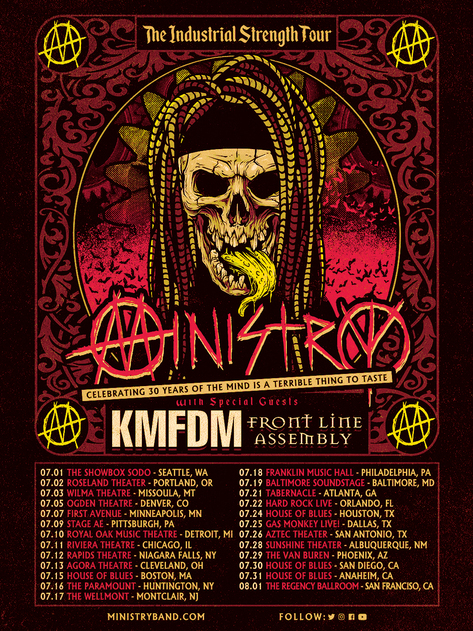