One of the most important features on a snare drum is the throwoff. While some drummers prefer a very simple mechanism (less stuff to break and go wrong), others like to have all the bells and whistles, the more possible adjustments the better. Throwoff designs have come and gone in the drum industry especially for Ludwig Super Sensitive, and it’s hard to find a modern design that has been around for more than a decade, with few exceptions.

One of those exceptions is the current Super-Sensitive strainer from the Ludwig Drum Company. Ludwig (known at the time as Ludwig & Ludwig) was one of the first companies to introduce a truly workable design for a parallel snare mechanism. Although Leedy introduced their “Marvel” parallel strainer in the late teens and early ’20s, it couldn’t hold a candle to Ludwig’s Super mechanism (as it was originally named), which debuted in the 1926 catalog.

With individually adjustable strands, offered in gut, coiled wire, and “silk and steel” (an early version of snare wire that resembles old guitar strings), and the positive action of the parallel throwoff, the Super strainer provided a highly adjustable and very precise snare unit that could be fine-tuned for both snare tension and pressure against the head. Add the three snare types and you had a truly innovative product that hadn’t been seen in the drum industry prior to that time. 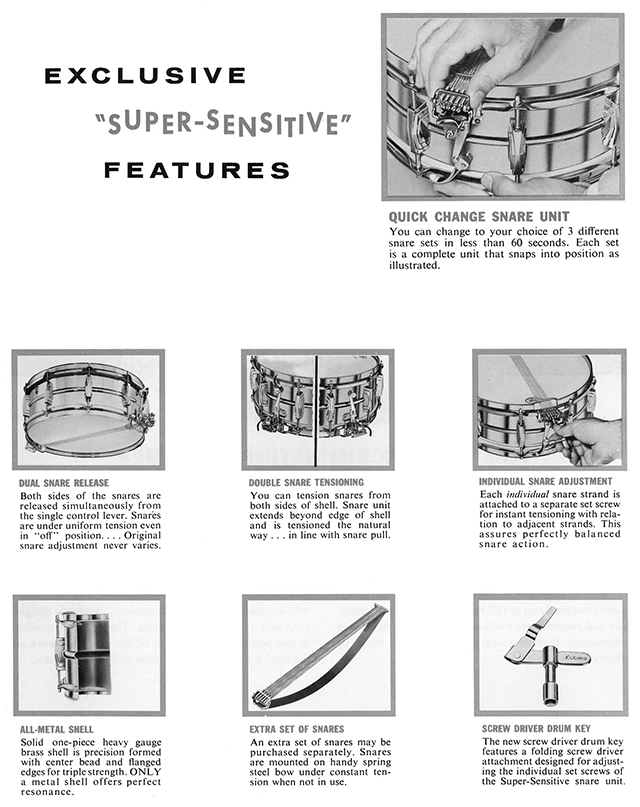 From 1926 to 1929, the Super-Ludwig was the flagship of the Ludwig line and the most expensive model in the catalog. But in 1929, Ludwig added another option to the mix – the Sensitive mechanism. Although it was a neat idea theoretically, there was a design flaw in the Sensitive mechanism that would eventually cause it to be discontinued.

Located underneath the top head inside the drum, the coiled wire snares of the Sensitive mechanism were directly in the line of fire from the deep impact of stick tips hitting the calfskin heads that were the only choice at that time. Given the location of the wires and the stretching ability of calfskin, it was only a matter of time until one or more of the wires would take a direct hit and get stretched to the point where the drum would develop a permanent buzz, necessitating replacement of the top snare wires.

Although Ludwig continued to make the Super and the Super-Sensitive through the late ’30s, the popularity of parallel mechanisms (and the Sensitive mechanism in particular) gradually waned. By the onset of World War II, when metal drums were discontinued and metal parts severely restricted by the War Powers Act, the sensitive mechanism had already disappeared from the line.

After World War II, Ludwig & Ludwig (which had been purchased in 1929 by Conn) was not nearly as profitable as it had been in pre-War years. Since Conn also owned Leedy Manufacturing, the lines of both companies were severely restricted due to post-War budget constraints and the burden of trying to reintroduce and update two complete lines of drums. Conn gave up on the idea after a brief effort and decided to combine the two brands into Leedy & Ludwig in 1951. When their flagship Knob-Tension line flopped, Conn decided to get out of the drum business altogether. In 1955 they sold Leedy to Slingerland and Ludwig to WFL (the company founded by William F. Ludwig, Sr., after he left Ludwig & Ludwig in 1937). 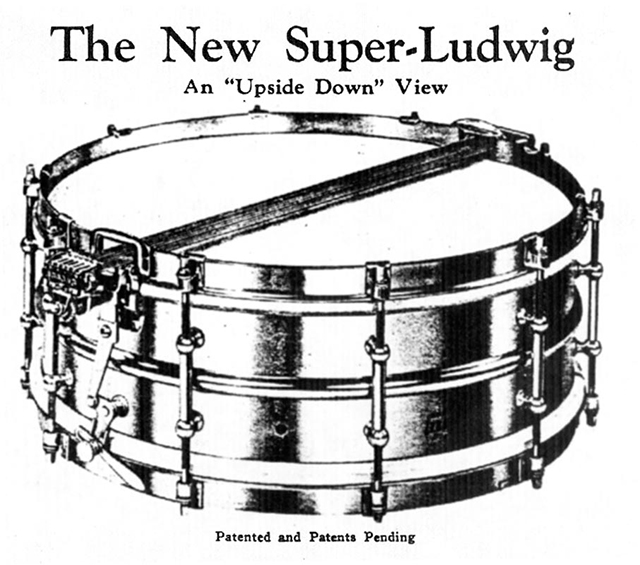 Shortly after regaining the rights to the family name, the Ludwig family decided to retire the WFL brand and reinstate the Ludwig name. The “new” Ludwig drum company began revamping and reintroducing the older models they had regained in the purchase of the Ludwig & Ludwig brand. When the parallel mechanism was finally reintroduced in 1961, the first major change was the name. In 1959 Ludwig had released a drum called the Super-Ludwig (later to be renamed the Supraphonic 400), which was the modern equivalent of the ’20s Standard model. Since the Super name was taken, the “new” model with its parallel mechanism had to have a new name.

Drawing from a long tradition of reusing names, the new model was given the name “Super-Sensitive 4-in-1” (with Acousti-Perfect shell design). If you’ve read this article from the beginning, you’ll remember that the Super-Sensitive was originally introduced in 1929 with dual strainers (top and bottom heads). Ludwig wisely chose not to revive the Sensitive mechanism under the top head, and used a bevy of snare choices (18-strand wires, 10-strand individually tunable wires, 6-wire/4-gut combinations, and all gut snares) to build more versatility into one drum.

In the tradition of waste-not-want-not, the drums were produced using old snare unit parts (from the late ’30s) and new parts made from the tooling that had been included in the assets of Ludwig & Ludwig. Most pre-serial number models even have the all-metal-constructed drop action from the ’30s. Shortly after the introduction of the new Super-Sensitive, parts supplies dwindled to the point where some pieces of the mechanism had to be reproduced.

Whether the old tooling was worn out, or just for the sake of modernization, Ludwig chose to make the slotted slide piece out of nylon or some sort of plastic. This proved to be a weak link in the mechanism in recent years, as the plastic eventually cracks and ceases functioning. Other than the replacement of this slide, the unit is virtually indistinguishable from the late ’30s models.

The most visible difference in the ’60s Supers were the snare guards and hoops. Triple-flanged hoops, combined with Mylar heads, had changed the position of the snare gates in relation to the snares. To compensate for these changes, Ludwig created a new stamped guard, which was attached to the drum via the two tension rods on either side of the snare unit. Unlike the original snare guard design, which depended on clamps around the tension rods for mounting, the tension rods merely passed through holes on the new models, and were held in place by head tension.

These guards apparently weren’t too sturdy and were eventually replaced (circa 1965) with a similar-appearing guard that was riveted to the bottom hoop. At about the same time, the die-cast throwoff lever was replaced with a curved, stamped piece, which is still part of the mechanism’s design.

The Super-Sensitive remained a strong part of the Ludwig line throughout the 1960s and was a favorite with school bands and orchestras. Ludwig aggressively pursued the school business. As a result, there are literally thousands of these drums languishing away in band rooms across the nation, some still in use today.

Even though the Super-Sensitive is still offered by Ludwig, the current mechanism bears little cosmetic resemblance to the original. With a wider, die-cast frame (which conveniently uses the same hole pattern as the vintage models) incorporating round tubular steel guards, the new mechanism has very little else in common with its ancestors other than the way it works. The mounting notches for the snares themselves are farther apart, and the unit requires careful adjustment to operate correctly.

There is one thoughtful improvement, which really validates the current snare unit as a truly sensitive mechanism. In addition to being able to tension all the wires individually or separately, the linkage which draws the unit upward has a lockable cam built into it, which allows the user to adjust the amount of pressure of the snares against the head and lock that adjustment in. This function also helps to atone for the many mounting mistakes that were made when these units were installed in the ’70s and ’80s. With sufficient care in the setup of the unit and adjustment of the wires, the Super-Sensitive still lives up to its name. Come to think of it, can you name another snare throwoff that can claim a 76-year (and counting) life span?