If you knew you were going to be stranded on a deserted island with food, shelter, no responsibilities, and all your drum gear, but you could only bring along one drum book and a guide to stick control, what would it be?

For many drummers, the answer would be Stick Control by George Lawrence Stone. What makes this book, released in 1935, one of the most popular drum books of all time? Well, for one, it is quite a challenging book. It also has a wealth of information and useful exercises to improve speed, touch, dynamics, and rudimental technique.

It is still the foundation of many teachers’ instruction because it has repeatedly proven that it will enhance the skills of any drummer who uses it. And as you’ll see here, it can also be adapted to offer drummers far more than originally intended.

In this lesson, we learn some new ways to interpret Stick Control to take it far beyond just a snare drum technique book. It can be expanded to develop your interdependence, feel, and timing, create beats and fills, and can be used to learn some very advanced skills you haven’t even imagined yet.

Stone knew that it was possible to play the drums with surprisingly little actual technique compared to other instruments (i.e., piano and violin), and that many drummers would get by without spending the hours necessary to become technically proficient on the instrument. His solution was to have drummers achieve balance and dynamic control between their hands by repeatedly playing a set of challenging sticking patterns.

Stick Control was created to improve a drummer’s dexterity by conditioning the muscles to work effortlessly. Stone advised playing each exercise in a relaxed state, stopping at the slightest sense of tension. He taught the patterns to be played with freely rebounding strokes in a relaxed grip from full-, half-, and low-height, with the drummer throwing the stick quickly downward and allowing it to return to its original position.

Using this idea, the stick does most of the work. Though many drummers don’t work beyond pages 5–7 of the book, the later pages are also full of tricky rhythms and rudimental patterns. Stone’s book remains challenging, insightful, and brilliant.

Though any of Stone’s patterns can be expanded upon similarly, we’re going to use just one sticking for all of these exercises to make it easier to understand how the basic idea is being revoiced, stretched, and morphed. The sticking is #6 from page five of Stick Control, a paradiddle inversion of RLLR LRRL (Ex. 1) that lends itself to both grooves and fills. It has been used inventively by great drummers like Steve Gadd.

It is sometimes referred to as an “inward paradiddle” or the “diddle in the middle” variation because the double strokes occur in the middle of the pattern.

Often drummers restrict the rebound of the stick, which is commonly done when playing an accent or following a loud note with a softer one on that hand. Depending on the technical demands of the following patterns, you may not always wish to use this approach.

While using Stick Control as originally intended will improve your rudiments, adapting the stickings in creative and novel ways will bring fresh challenges.

Ex. 2 adds double strokes (diddles) to the single strokes of the original pattern, so now the pattern is played as all double strokes but at two different speeds. I love exercises like this because they are great for learning to control your bounces.

Ex. 3 takes our pattern and inserts a note between the double strokes, creating a quick three-stroke ruff.

Ex. 4 adds a short buzz to that inserted note, which is a common technique of Scottish pipe band drummers. If we add a flam to each double stroke as seen in Ex. 5, we’ll be playing a variation of a “single flammed windmill” but without an accent.

If we combine doubles, flams, and accents, we arrive at Ex. 6. This is a displaced version of the hybrid rudiment called a “book report.” These variations and others can be applied to any pattern in the book, which may come in handy as you’re waiting for rescue on that deserted island.

Stone wrote a second book, Accents and Rebounds, that incorporated some of the ideas of his prized student Joe Morello—but that doesn’t mean we can’t add accents to Stick Control, too. Ex. 7 adds an accent and shifts it later by one sixteenth-note every two beats throughout the pattern. This is harder than it looks, and is a skill we’ll need for some of the upcoming ideas.

Adding your feet beneath our pattern will create three- and four-way independence patterns that can really test your grit. Luckily, Ex. 8 isn’t complicated—simply play quarter notes under the snare pattern. Playing different kick patterns under Stone’s stickings can help you develop freedom and independence with Latin rhythms like samba (Ex. 9) and baion (Ex. 10).

Ex. 11 is a two-bar pattern that displaces the hands one sixteenth-note later so it is now played on all the e’s and ah’s on top of alternating feet. This can be frustrating if you don’t slow it down and count it before adding the feet. The first bar of Ex. 12 has the bass drum on the downbeats, while the second bar displaces it to the &’s.

One great benefit of working on these ideas is that it forces you to put the hand pattern on autopilot while you’re focusing on the foot pattern. Essentially, Ex. 13 is the same as Ex. 12, but this time we’re using both feet and alternating between them. That wouldn’t be too bad, except that the second and fourth measures have five bass drum notes, so it continually reverses the leading foot.

Another interesting idea to help you gain timing control is to vary the rate (speed) of the notes. For Ex. 14, we play our inverted paradiddles with our hands and our feet, but at two different rates.

In Ex. 15, our hands shift from eighth-notes to sixteenth-notes in the middle of each measure, causing the hands to reverse over the feet.

Ex. 16 adds a flam to the previous idea to give your hands more of a workout.

For Ex. 17, play the same sticking pattern as triplets over two measures. Since it is eight notes long, it will be shifting over the triplets, implying a four-over-three polymeter. Polymetric phrases are a great way to learn to flow over the barlines. Try starting with just the hand pattern and counting it so you always know where you are. Once you can do that try adding the bass drum.

Ex. 18 brings out the polymeter more because it accents every fourth note of the pattern. The foot pattern alternates, so again, make sure to play the hands with counting before trying to add it.

Ex. 19 is definitely a beast and uses a polymetric flammed mill (in triplets) while our feet play our RLLR LRRL inward paradiddle pattern.

We can create polyrhythms that use Stone’s stickings, too. In Ex. 20 we’ll create a simple four-over-three polyrhythm that uses our sticking. Since we’re in an odd meter of 3/4, our foot pattern reverses itself in each measure.

Ex. 21 is based on a trickier variation of a five-over-four polyrhythm. By spacing the notes of our sticking pattern three sixteenth-notes apart and then two sixteenth-notes apart repeatedly, we create a grouping of five to play over our quarter-note foot pattern. Since this requires five quarter-notes to complete a cycle, our alternating foot pattern reverses itself in each bar.

Ex. 22 does something similar, but spaces the sticking two and then three sixteenth-notes apart, creating another unique pattern.

The paradiddle inversion we’re using was chosen partly because it’s familiar to many and because it can be adapted to create a wide range of fresh beats. For these grooves, we’re going to play them as sixteenth-notes. Remember that dynamics really help busy grooves sound funkier, so play the unaccented snare notes quietly to bring out the accents.

For Ex. 23 play an eighth-note hi-hat pattern while revoicing our RLLR LRRL pattern so the right-hand notes are now being played with the right foot on the bass drum while the left-hand plays the snare. This sort of groove is a great bass drum and interdependence workout.

Ex. 25 takes this idea further using a funky disco-style groove with open hi-hat notes on all the &’s. You may find this challenging with everything else going on. Of course, there’s no reason we can’t have our right hand and right foot play the same thing (Ex. 26).

We can also use a more straightforward bass drum pattern while our hands still play the inverted paradiddle (Ex. 27). Ex. 28 uses a similar but funkier bass drum pattern that sometimes falls under left-hand notes, requiring greater independence along with a tasty hi-hat opening.

In Ex. 29 the sticking creates a funky half-time groove that feels slow because the accented snare occurs just once per measure on count 3. To do this, you’ll have to bring your right hand off the hi-hat to play the accented snare note midway through the bar.

Stone’s stickings are perfect starting points for creating compelling fills. Merely moving our hands around the kit while playing these patterns creates unique melodies, and if we accent notes, we can also outline syncopated rhythms. Ex. 30 uses our sticking for both the beat and the fill (though you can use any beat you like) and moves the hands down the toms.

By accenting with your right hand and ghosting the left-hand notes, you end up with a fresh fill with lots of subtle motion.

Ex. 31 uses accents to create a fill that sounds like triplets even though it’s all sixteenths. To prove this point, try it with a shuffle groove—the placement of the accents is what makes it sound cohesive.

Ex. 32 can be used as a fill or a coordination warmup pattern. You could also alternate each bass drum between your pedals. Ex. 33 is written for double bass and would make a killer triplet riff as part of a drum solo. Next, let’s take our sticking pattern and transform it into a shuffle rhythm (Ex. 34).

Ex. 35 could be used as a fill or a groove. It takes the previous pattern and inserts bass drum notes on the rests and adds a tom melody to it. 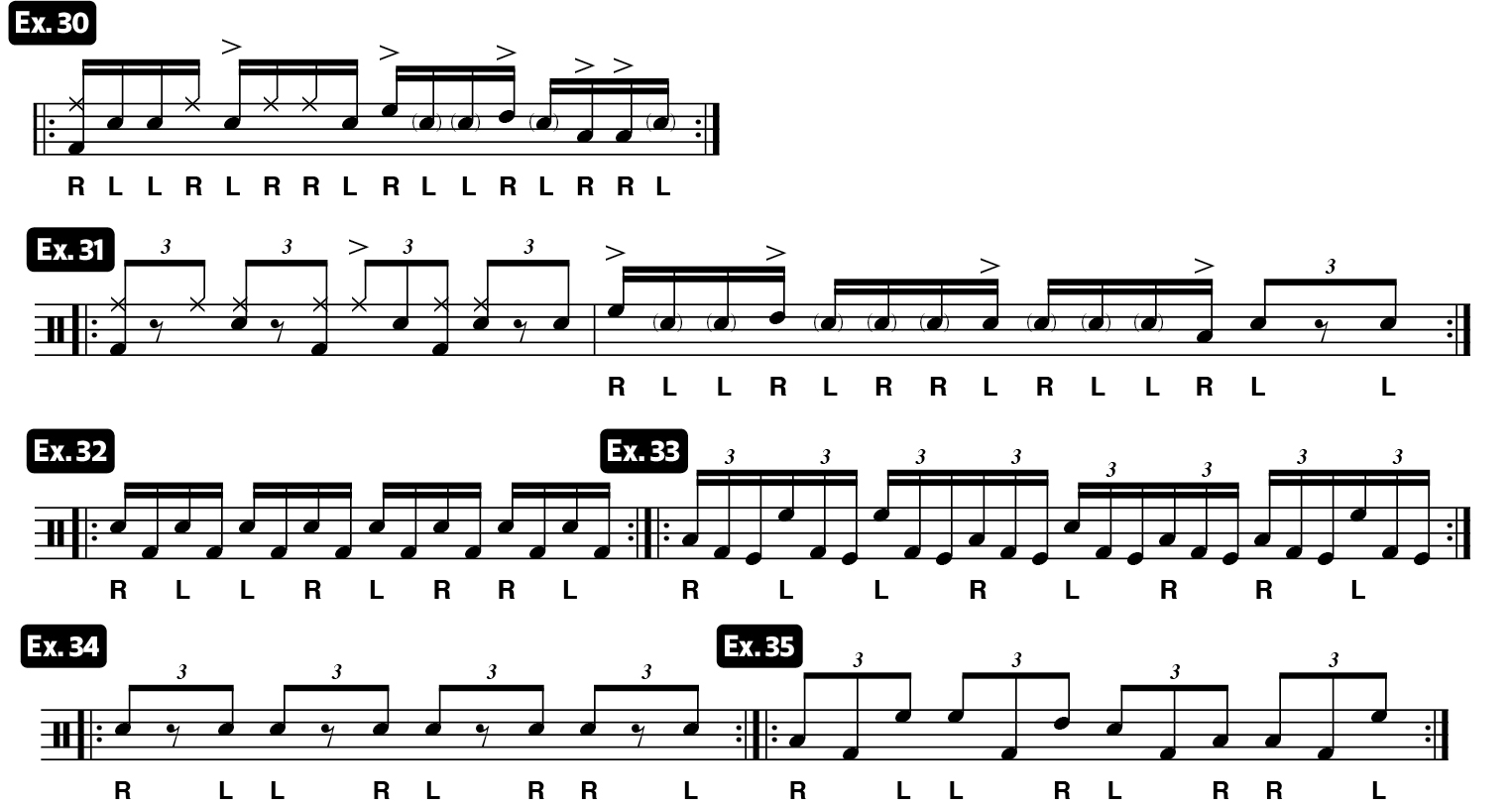 Now let’s try playing the right-hand notes on the right foot, as we did earlier. If we play quarter-notes on the hi-hat, we’ll get a funky, hip-hop style groove (Ex. 36).

For Ex. 37, link your right hand and right foot together to create a very funky triplet groove. I think Ex. 38 is a very cool hip-hop groove partly because it uses our inward paradiddle sticking pattern in a shuffle rhythm, but also because the funky kick pattern uses the same rhythm the great Jeff Porcaro used for his killer groove on the song “Rosanna” in his band Toto.

Ex. 39 returns to sixteenth-notes and splits the sticking pattern between the ride bell (right-hand), hi-hat, and snare (left-hand). Underneath all this activity we play every third sixteenth-note on bass drum to create an over-the-bar eight-over-three pattern. Practicing bass drum polymetric patterns like these are great for finding all the awkward parts in your coordination. Once mastered, your foot can play just about anything you’d want it to with the hand pattern. Ex. 40 moves the right-hand part to the bass drum while the left hand holds down the snare duty, but now the right hand will play every third sixteenth-note, resulting in an über-funky, three-over-eight groove.