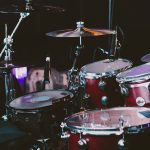 Inside The Imagination Of A Drum Inventor

“To invent, you need a good imagination and a pile of junk.”

Do you ever think about the ways that drums and cymbals are designed? I was considering this last week and decided I would call one of the most prolific inventors I know: Ronn Dunnett of Dunnett Drums.

Ronn’s imagination is proven. His invention resume includes throw-offs, mounts, snare wires, heads, hoops, keys, new styles of construction for various wood and metal drums, and many more.  You might have one of his inventions on your kit. He’s also built entire lines of limited edition drums for some of the biggest drum companies such as the Bonham titanium kits he constructed for Ludwig. In recognition of his titanium snare drum developments he even received an award (and $20,000 — sweet!) from the International Titanium Association.

We ended up talking for an hour. But the first questions I had for him were, “Did you have a favorite invention?” And, “Does inventing ever come easy?”

Ronn’s reponse: “My favorite is the quick release on the throw-off, taking wires off without a tool. That one became popular and was patented. It also was copied, accidentally, by another manufacturer so I licensed it to them. What I love about that is that no one had thought of it before. So much stuff is written in stone as far as how drums are made. Some things have been built the same way forever.”

What about my second question? Were there any inventions that literally fell into his lap? And, he had one: the metal wood hoop. Here’s the story.

“I had hoops on hangers in my shop,” Dunnett says. “One day I was going to reach for a hoop at the back of the stack. I grabbed a triple flange hoop that was facing into a wood hoop. I started to set them down and I thought, ‘Oh my God, if I could machine these so the wood would go in the metal, then you wouldn’t have to ruin your wood hoops when you play.’”

Sounds great. Wood hoops are frequently destroyed through use, and can be expensive to replace. So how long did it take to turn a wood and metal hoop in to a new product? “Honestly, in 30 minutes I put it together, put it on the drum, and then called my patent attorney.” Not bad for a day’s work.

Now, alert readers, comment below about your favorite drum invention and you’ll have a shot at winning a set of KBrakes or KBrakes Grips, two of the best tools for stopping your bass drum from creeping permanently.

And, while we’re at it, congratulations to last month’s winner of a Maxonix Stick Ark: Laura Hill Timpanaro.

Dremtrigger (left) and the Renzi pedestal.

Ronn is not done designing and neither is the industry. He points to A&F as one of the new companies he admires that is pushing the boundaries of design. Just in the last year products as disparate as freedrum and dremtrigger had successful Kickstarter sendoffs. This week there’s a new Kickstarter hopeful, the Renzi, an advanced heel pedestal system that replaces the typical bass pedal heel plate. May the inventions keep coming.