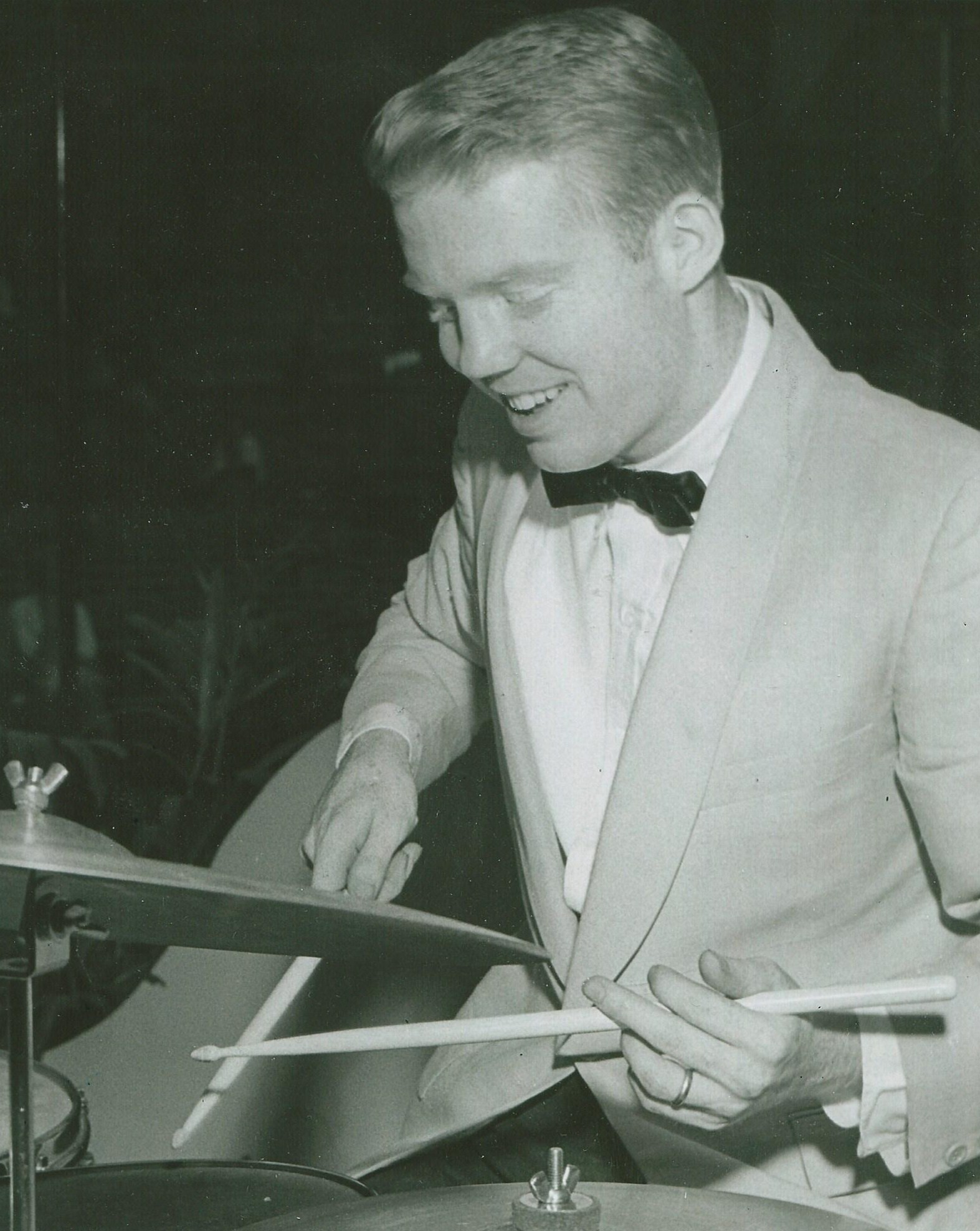 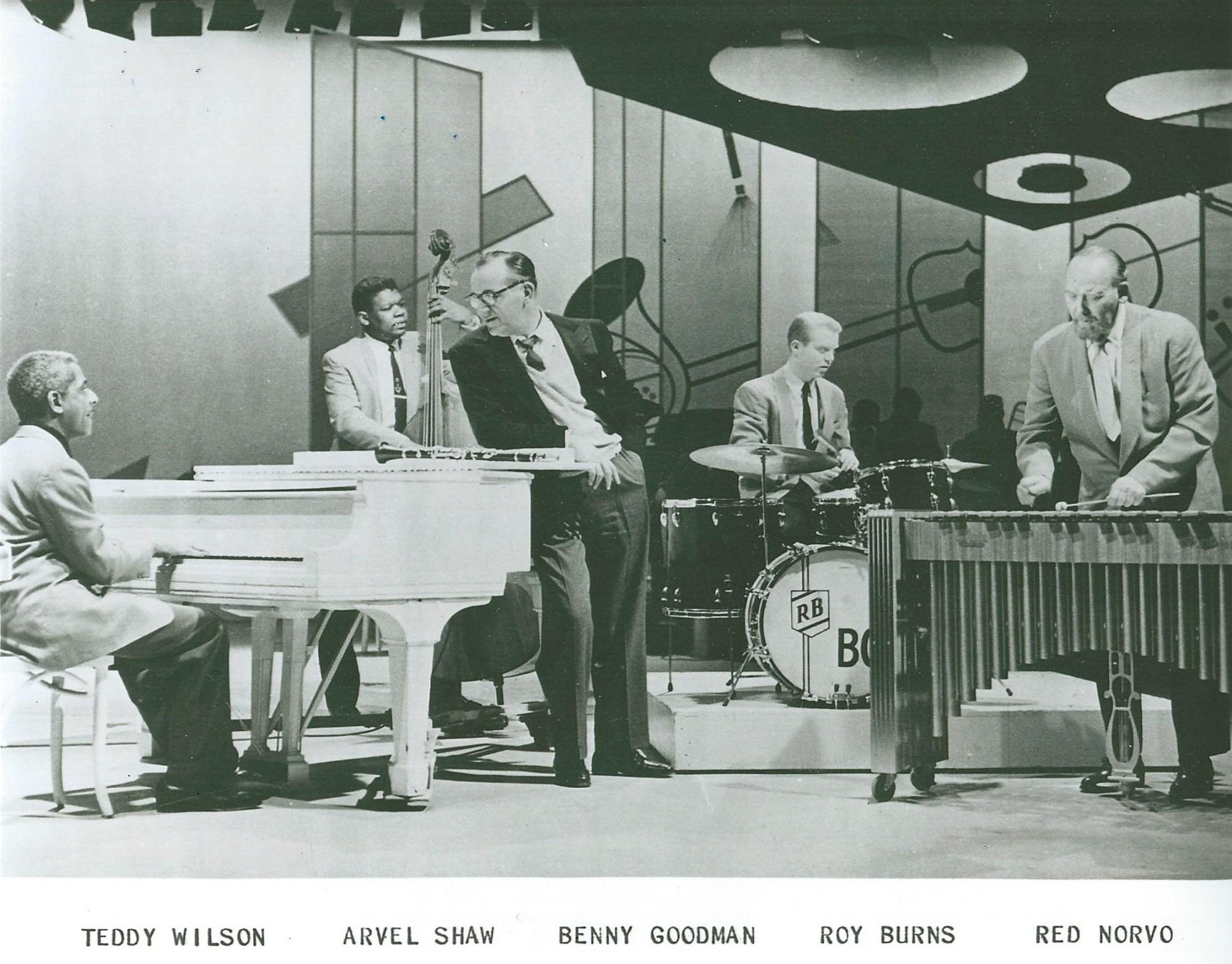 Playing with the Benny Goodman Quintet on television in 1960 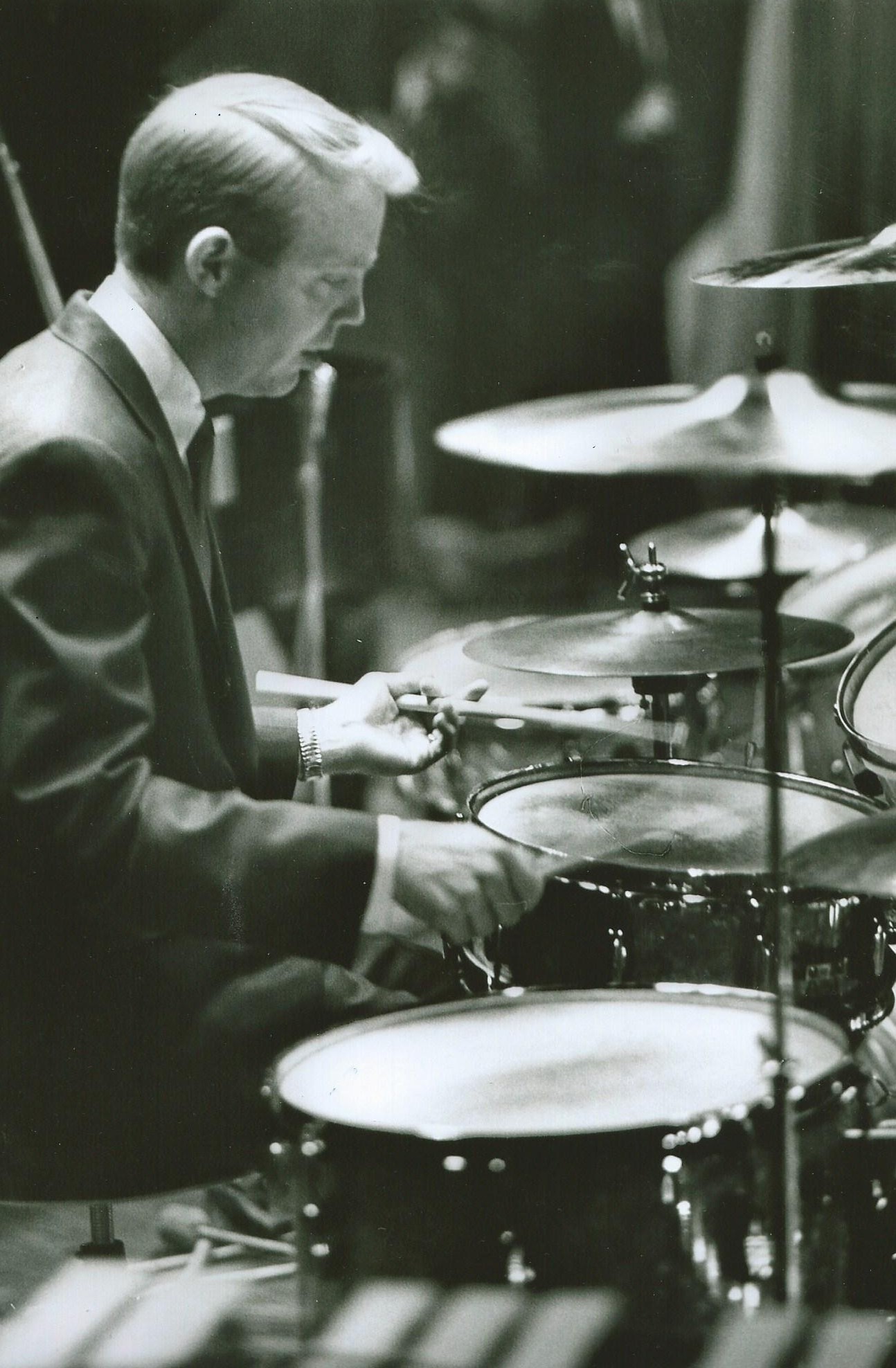 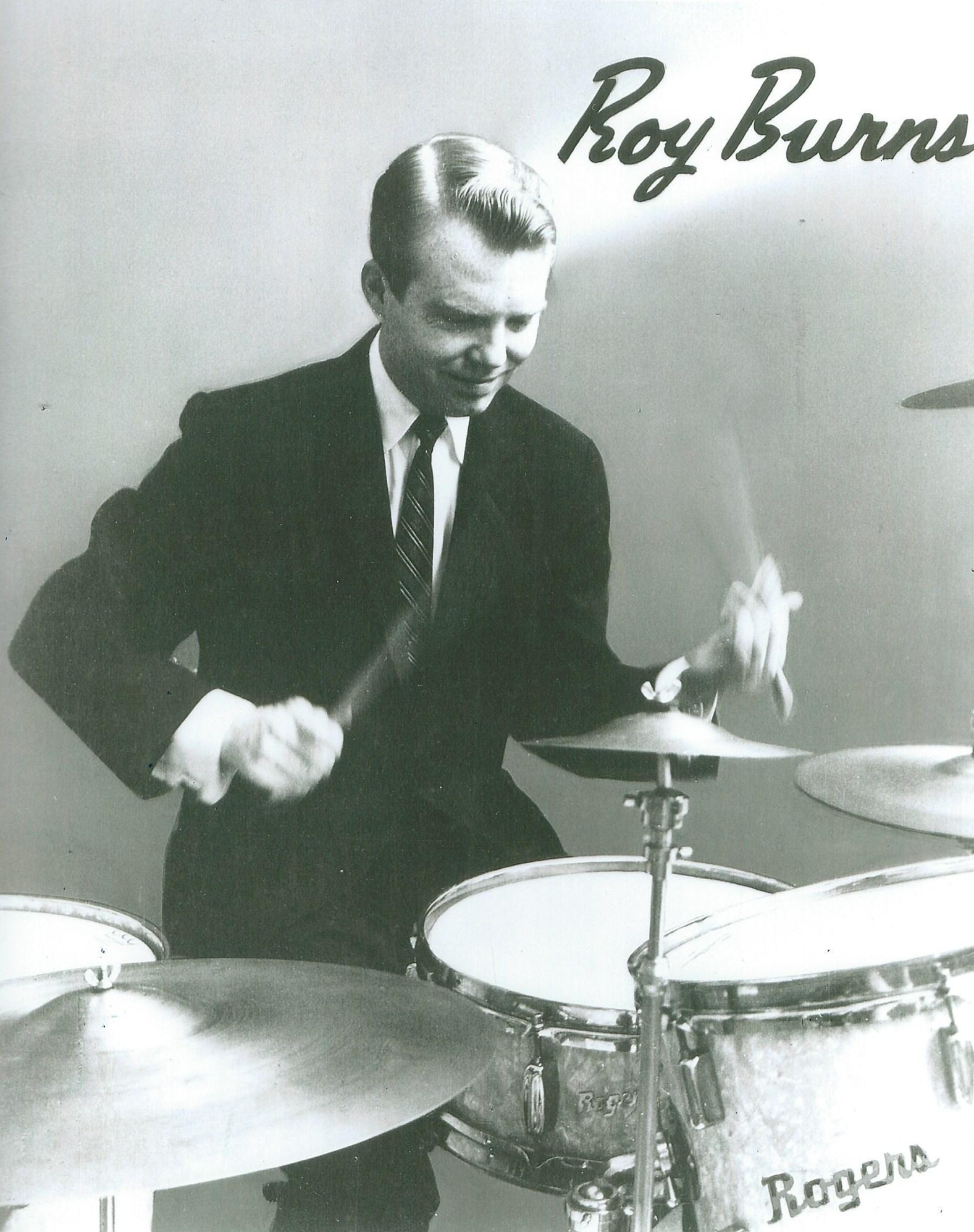 By the early 1960s Roy was a Rogers endorser, as depicted in this catalog shot 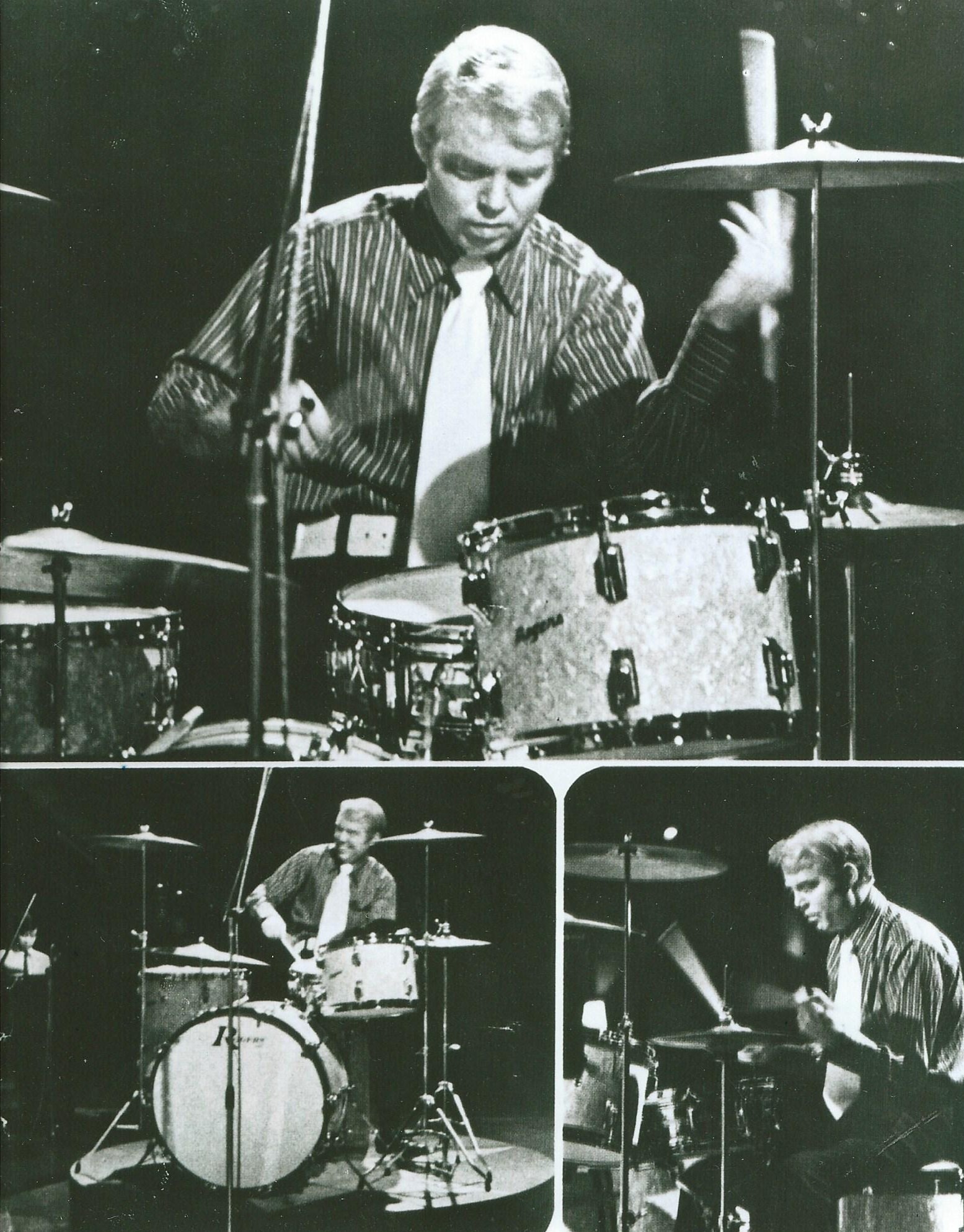 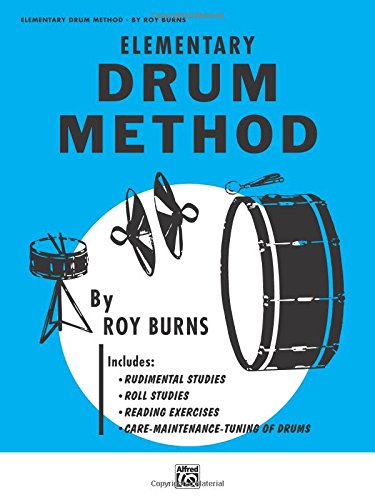 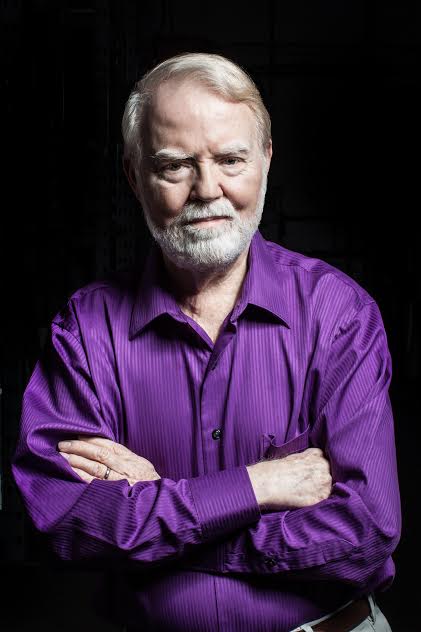 With the passing of Roy Burns on May 2, the percussion world lost a legitimate icon. His list of accomplishments is, quite simply, unrivaled in drumming history: Playing with Benny Goodman at age 22; pioneer of the artist/clinician role with Rogers; founder of Aquarian drumheads; and author of some of the most popular instructional drumming method books ever published. In a November 2016 interview Roy summed up his legacy to me, saying, “I’ve had a great career, because I’ve been able to do so many things. I played gigs, I was a studio musician, I did clinics, I wrote books, I wrote articles, and I’ve helped run a successful accessory company. I’ve done just about everything in the business. And it all goes back to a love of music. That’s been the basis of my whole life.”

That life began on November 30, 1935 in Emporia, Kansas. By the age of six, Burns had developed an interest in drumming. When he demonstrated some early skills, his first teacher told him, “You have nice hands, but that’s not enough. Music is about thinking.” That stuck with Burns for his whole career. “Put the music first” became his motto.

At 17, he was taking lessons in Kansas City, Missouri when he and his teacher had the opportunity to attend a Louie Bellson concert. The next day Bellson dropped by the teacher’s studio. After listening to Burns play, Bellson told him that he should move to New York to pursue his music career.

“I’ve done just about everything in the business. And it all goes back to a love of music. That’s been the basis of my whole life.”

Burns took that advice two years later, moving to the Big Apple with $300 and a drum set. While studying with Jim Chapin, he started sitting in in clubs around the city. He caught the ear of Sonny Igoe, who got Burns an audition with Woody Herman’s band. That gig started his professional career.

Then came a call from Benny Goodman’s manager. Goodman led the most prestigious big band of the day. He invited the 22-year-old Burns to audition — by sight-reading Goodman’s charts, with no rehearsal, in front of a live audience. He passed the audition, ultimately playing with Goodman from 1957 through 1961. During that time he established himself as a drummer of note, earning the nickname of “the boy drummer.”

Following his tenure with Goodman, Burns worked in the New York TV studios. By 1965 he was drumming on the Merv Griffin Show and endorsing Rogers drums. Rogers wanted a high-profile American drummer to promote their drums in Europe, so Burns agreed to do a six-week clinic tour of the UK and Scandinavia. That was the beginning of his career as an artist/clinician — a title that he can rightly claim to have pioneered.

In setting a standard for the genre, Burns made sure that his clinics combined drumming instruction with entertainment value. Once, when the first question at a clinic was, “What do you think of Ringo Starr?” he replied, “I never criticize anyone who makes more money than I do.” His clinics were so successful that Rogers offered him a full-time job, and he became an artist-in-residence.

Burns was with Rogers from 1968 to 1980, during which time he was involved with product development and quality control. When he started, Rogers was an innovative and coveted brand of drums. But after the company was sold to CBS, things changed. The new “corporate” attitude didn’t mesh with his concepts of what was good for drummers, so he determined to start his own business.

In addition to all his other accomplishments, Burns was a successful author. His “Concepts” column was featured in Modern Drummer from 1984 through 1996, offering the same sort of helpful tips and advice that he had shared so successfully in his clinics. It was one of the magazine’s most popular columns for its entire run. He also wrote several popular instructional books. While he was playing with Benny Goodman he released Elementary Drum Method, which established the “Boy Drummer” as an author and educator. His later works include Advanced Rock Drumming, New Orleans Drumming, and One Surface Learning.