How To Write Drum Charts

Necessity is the mother of invention” is a saying that Liz Ficalora – a Nashville-based session artist, producer, author, and drum chart instructor – lives and dies by. Or, perhaps more accurately, she uses it to help pay her mortgage. After graduating from Berklee College Of Music in Boston, she relocated to Music City, where she landed an audition for a country band.

Beating out 14 drummers was ego stoking for a minute. Then she got her first assignment: Learn 96 songs in two weeks. “There was no way you could memorize that many songs and could write drum chart in so short a time,” she says from home on the Monday following a crazed weekend at 2013 PASIC, where the previous year she taught a masterclass. “Writing them all out really helped.”

The fruits of that process are found in Ficalora’s book: How To Write A Fast & Easy Drum Chart (published by Alfred). You might think of her method as a Cliffs Notes approach to charting that falls somewhere between a personalized cheat sheet and a standard chart, which she deploys to full effect to parse songs by everyone from Green Day and John Mayer to Maroon 5, Bonnie Rait, and a ’50s-’60s medley to illustrate her technique. 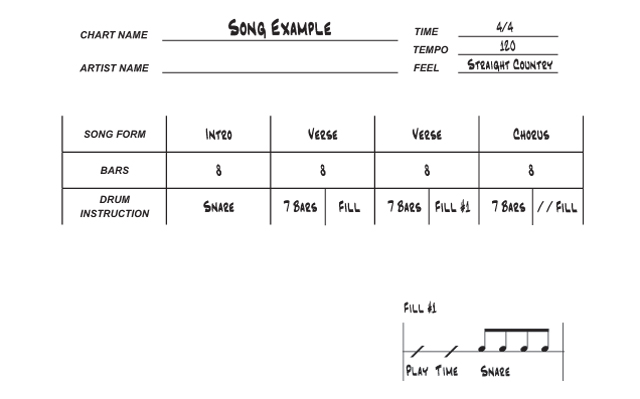 The essence of Ficalora’s method is to take a standard four-line single-bar notation and separate it into a “three-tier system” (see Ex. 1). “[Standard notation] drives me crazy,” she says. “My eyes glaze over. So I find that this is easier for me to see. At a glance you’re determining what’s the verse, how many bars are in the chorus, how many bars are in the intro, how it starts, how long it’s going to be. It’s your road map: Do I start it, or does the guitar start it? How many bars do they need before I come in? Knowing that kind of stuff really makes you stand out.”

The third tier, “Drum Instruction,” is where she fleshes out the song with concrete descriptors kit should be played, where to put the fill, and so on. “It was a place to write to see if they wanted me to stop or play cross-stick or if they would want it on the snare or if it is a signature fill.”

Take for example the Alicia Keys song “If I Ain’t Got You,” a tune in 6/8 that has a triplet in the last bar of the second verse, which she notes with commonsense numbers and note icons. “[This section] translates as, ’It’s the verse, it’s eight measures. You’re going to count seven, but in the eighth measure, this is the figure you’re going play.’

And the [forward] slashes [preceding the mini note icons] … those are time slashes. On beats 1, 2, 3, you’re going to play time, but on beat 4 of the 6/8 you’re going play that figure. I notate that because, if I had to play this chart, I want get that [detail] because it sounds really cool.”

One of Ficalora’s shortcuts for determining the time signature is listening to where the snare falls in the measure. The most common (i.e. commercial) times are 4/4 (snare on 2 and 4); 3/4 (snare on 2 and 3, or just 3), and 6/8 (snare on 4). That brings us to the feel of the song. Ficalora realized there are four feels that session drummers would most often play. 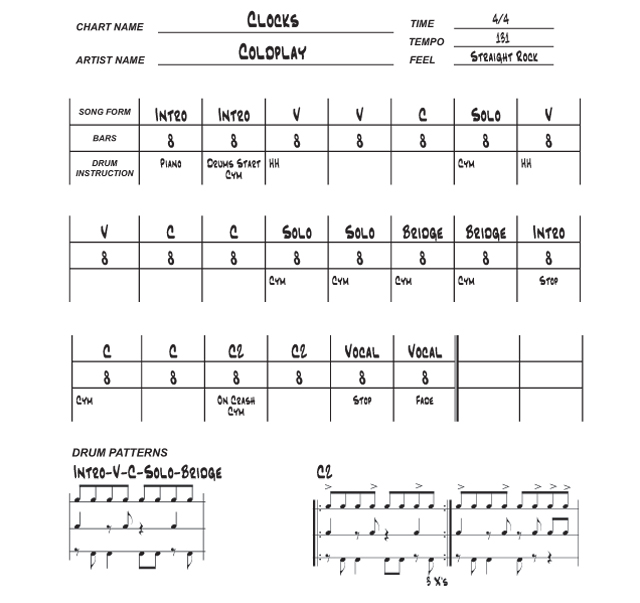 She also adds the “Song Detail” element at the bottom of each chart (see Ex. 2), breaking out the pattern for bass drum, hi-hat, and snare on their own lines. You can also make additional notes, like “tag,” which is shorthand for the whole measure.

“I’m listening for phrasing and I think that’s so much easier than trying to count,” she says. “If a tag is really eight bars, but my ears are hearing it in four, and it’s getting towards the end of the song, that’s when I start to get into my tag mode.

“In the bridge it’s maybe written as eight and one. You can write nine, but it’s the stop and one measure, so I made it that way. If you hear everything in two bars or eight bars or four bars, write it the way you can do it. Because I tell my students, ’No one else is going to be reading this chart, just write what works for you and the way you hear it.’”

Chart-phobic players rely on their memories more than reading abilities, especially after they get more comfortable with the songs. But Ficalora’s approach is so fail-safe you may find that reading can be fun. “The funny part is that guys are saying, ’You don’t need your charts anymore.’ And I’m kind of like a little kid [laughs]. Yeah, you do memorize them after awhile, but I really like having them there.”