It’s happened to all of us. A song comes on the radio, and you tap your foot along with the music and the drum intro. A few beats later, you suddenly discover that something is very wrong. Your foot wasn’t on the downbeat after all. Count 1 has suddenly appeared someplace else, far away from where you thought it was, much like a Criss Angel magic trick. This has happened to all of us, momentarily inducing that terrifying feeling we get when we’ve leaned too far back in a chair, hovering on the brink of disaster.

Here’s an even worse scenario. You’re on a gig, and someone calls a song you don’t know and says, “The intro’s kind of weird — just listen,” and the next thing you know you’re playing a beat displacement that would make Vinnie Colaiuta or Gavin Harrison proud.

Drummers live in quiet, quivering dread of these humiliating moments. Worse still, we all know that if anything goes wrong on stage related to the timing of a song, the drummer gets blamed no matter who’s really at fault.

Some songs have this effect on the listener entirely by accident. It was just a musical illusion caused by assuming or perceiving a pattern to start on count 1, or any other count, when it doesn’t. Other songs throw the listener off with an unusual accent pattern that suggests the phrase begins somewhere it doesn’t. Some songs have this effect due to a mistake made during the recording that was later kept, simply because it sounded good.

Some songs deliberately use this technique to intentionally mess with your head. Those songs are just plain evil. Bands like The Police, The Rolling Stones, Van Halen, and Led Zeppelin have so many songs that begin this way, it almost sounds like no one really knew where 1 was, and it just kind of coalesced into existence by musical consensus during the song’s recording.

We’ve collected a few well-known and some not-so-well-known examples of these songs and tried to decipher how and why this deception occurs. Hopefully, this admittedly incomplete sampling of tunes can serve as a primer that may help you survive a train wreck onstage and achieve “oneness” with your band.

One incredibly useful technique that can help make you a master of meter is to simply count. It wouldn’t surprise me to learn there are cave paintings of Cro-Magnon drum teachers instructing their students to count out loud while using saber-toothed tiger bones to pound on mastodon hides. Many drummers hate to count. Go on, admit it, you’re one of them. But it works well, works quickly, and always has.

Plus, counting can help you get your bearings until you can just “hear” it. For these examples, we’ve written out the drum part along with the part responsible for this deception. It’s a good idea to listen to the originals and count along with them. It’s a great ear/brain training exercise.

While writing this article, I noticed that intros like these are a bit more rare today than they were 20 or 30 years ago. That would be the BPT epoch: before ProTools. Our desire to correct all our best mistakes may put many of these wonderful intros in a time capsule to be forgotten. I hope not, since I think that’s one of the reasons that all these songs are unique and interesting. It’s the imperfections — deliberate or otherwise — that let you know it’s human.

1. “Rock And Roll” by Led Zeppelin

Every rock drummer has to play this classic song sometime, and most screw up the intro. The common mistake is to play the first note on count 1 and then add extra notes to the end of pattern to make it add up to 4/4. The intro is all in 4/4, and starts on the & of beat 3, though some drummers prefer to think of it starting or ending with a measure of 3/8. It definitely helps to count it out. Most drummers don’t know that John Bonham based this intro very, very closely on — or perhaps just plain stole it from — Charles Connor’s intro to Little Richard’s song “Keep A Knockin’.”

2. “All Along The Watchtower” by Jimi Hendrix

Wonderful, impulsive, quirky, inspired, completely unpredictable, and a definite part of the Hendrix charm. There are three distinct groove and feel changes in the first ten measures. You’re going to need a GPS system to find your way through this one. This one looks obvious on paper, but I’ve known several students and have seen other drummers who have messed it up live. It’s funny how some of these intros may completely baffle one drummer while being obvious to another. If this one throws you, the melody of the bass line or the snare accent on the & of 4 may be the source of the problem. 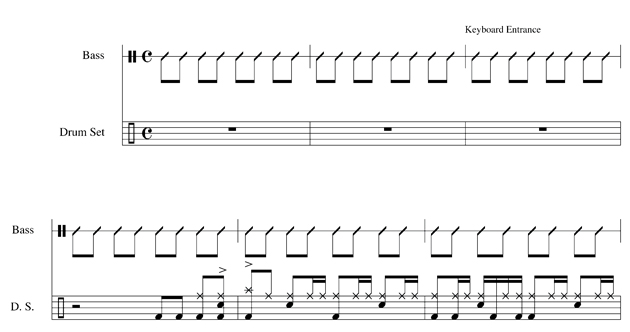 The Eagles were known for their bluesy country-influenced pop-rock songs, which populated the airways for over a decade. With members like Joe Walsh, Glenn Frey, and Don Henley on drums and vocals, it’s not hard to imagine why this supergroup had a string of radio hits.

“Take It Easy” was but one of several Eagles tunes that had tricky intros. The guitar accent pattern is usually misperceived as being played on 1 2& &4& in every measure up to the drum entrance in the ninth bar. The trick to this one is that the guitar chords actually come in on count 4.

5. “Start Me Up” by The Rolling Stones

Perhaps the best-known recorded screw up of all time. Charlie Watts had a problem finding 1 with Keith Richard’s guitar intro to “Start Me Up,” screwed up his entrance, and then tried to fix it as it went along. That would make this the best-known train wreck ever to become a hit song and make oodles of dollars in the process. I’m sure he laughed all the way to the bank. Oh well, it just goes to show that sometimes a mistake can be the most interesting thing you can play.

The Cars were another popular ’80s band that was all over the radio and MTV with a string of huge hits. “Since You’re Gone” begins with drum machine handclaps, then later with keyboards and guitars. The handclaps are primarily responsible for this auditory illusion. The tendency is to hear them on the downbeats rather than the upbeats. 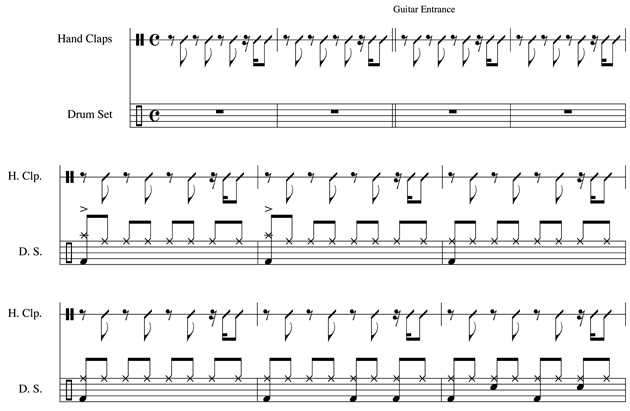 7. “The Crunge” by Led Zeppelin

I included this song simply because the last time I wrote it out, I screwed it up. An astute reader of DRUM! (and aren’t you all?) pointed out the mistake to me, and I’ve wanted to correct it ever since. My mistake was to loop the first measure of the groove with software and not count the entire intro out.

I assumed the pattern started on count 1, when it actually starts on count 6. If I’d counted further into the tune, I’d have noticed that both the bass and guitar entrances suggest the actual placement of count 1.

8. “No More Tears” by Ozzy Osbourne

“No More Tears” has a cool little bass intro provided by Mike Inez, who later played with Alice In Chains and Black Label Society. The trick is guaranteed by changing the time signature in the measure where the late Randy Castillo enters on drums. I had to work through this one a couple of times to work out the 9/8 time-signature trick. This may be cheating, but it worked. This one’s guaranteed to make any and all headbanging stop, if for only a moment.

These tunes are a bit like magic tricks. They’re easy to play right once you know the trick. On this one, the guitar starts on count 2 and not count 1. Counting it out can help you get it down the very first time. I could have just as easily chosen to write out SRV’s “Couldn’t Stand The Weather,” another of his tunes with a tricky intro that uses an odd time signature to achieve its dastardly ends. 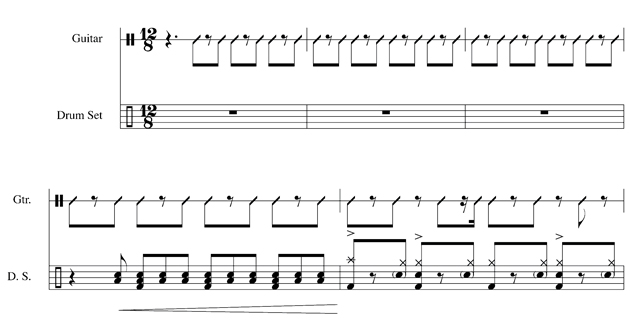 “Sold Me Down The River” was The Alarm’s biggest hit in America and is one of those evil songs that were deliberately designed to throw you off balance. This time it’s the work of the clever drummer Nigel Twist. By the time the guitars enter in the fifth measure, it’s anyone’s guess where 1 is.

This tricky band is still around today but with some new members. They successfully pulled off a huge hoax on the record industry in 2004 with their song “45 RPM,” which they falsely attributed to a youthful band called the Poppy Fields. The song charted well and, like Garth Brooks’ similar Chris Gaines hoax, tells us lots about the music industry. 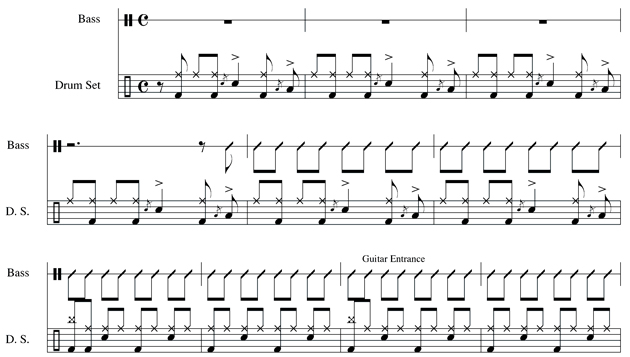 Eddie Van Halen is notorious for making drummers’ lives hell with his wacky intros. From a guitarist’s perspective, I’m told his parts make sense. But to a drummer, well — you can almost see the darkened light bulb hovering above our collective heads. I’d struggled with Van Halen’s “Unchained” several months earlier, rarely coming out in the same place twice, before the bulb flickered and then suddenly went on.

Of course, Alex Van Halen offers us an equally odd drum part to master. This one’s pretty much impossible not to butcher if you don’t count. Frankly, it’s pretty easy to butcher even if you do count. The trick is knowing that the guitar part enters on the & of 1 and then not getting lost. 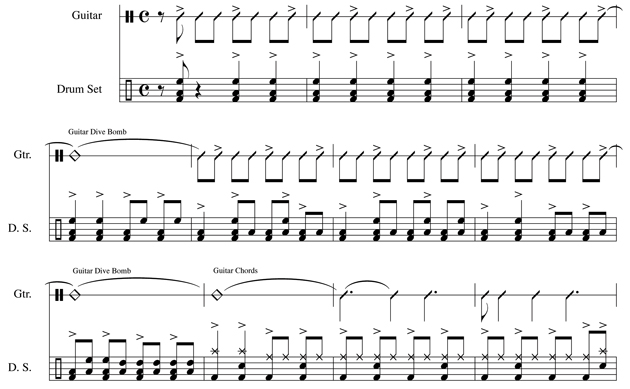 This one is tricky because it can sound like the cowbell begins on the & of 4 rather than on count 1. The way in which that cowbell is either muted or let to ring enhances the illusion. Charlie Watts saves the day with his offbeat but simple entrance.

This article originally appeared in the December 2005 issue of Drum! magazine.