From the “Bo Diddley” beat in the 1950s to polyrhythmic shuffles of the 1990s, drums have the power to make a song memorable with both repeating patterns of beats and one-time explosions of color called “fills.” A beat is like a guitar riff—the best ones are hummed for ages, and never get old no matter how much repetition they’re given. A good fill is like a catchy melody or guitar lick that sticks out for its creativity, expression, and perfect placement within the song.

Here are 29 tunes covering 48 years of our favorites up to 2003, when this piece was originally written. Included are written notation examples for you you study, practice, and learn, as well as clips of the original songs from which they came for you to hear in context. Let us know some of your favorites in the comments below!

The groove for this classic beat is usually played on the toms and is derived from a 3:2 son clave pattern that’s the basis of many Latin music styles.

This track employs a two-handed unison shuffle with quarter-notes played underneath on the bass drum, known as the “Prima shuffle.” This groove remains very popular today.

Charles Connor on ‘You Keep A-Knockin’’ by Little Richard (1956)

The first time I heard the intro to this song I thought it was a different version of Led Zeppelin’s “Rock And Roll.” I later learned John Bonham “borrowed” Connor’s pattern almost note for note for Zeppelin’s better-known song. [Editor’s note: This notation excludes the barely audible feathered bass drum pattern for clarity of the main riff]

This track was important because it marks the transition from shuffle-based grooves to straight rock patterns. Earl Palmer played the eighth-note rhythm of Little Richard’s piano part on his snare with his right hand and played backbeats with his left.

The original version of this class song features a typical surf or twist beat characterized by the snare playing 2& and 4. The original recording has a quiet bass drum, though on later recordings the four-on-the-floor pattern is more obvious.

This classic tom tom drum solo was based on drummer Ron Wilson’s high school marching band cadence and can be thought of as surf music’s “Sing, Sing, Sing.” It’s one of the first beats drummers often learn and is in a rare class of beats that are instantly identifiable even by non-drummers.

This remarkable groove is still fresh, musical, and is probably the most popular linear groove ever recorded. It’s also arguably the most unique beat in The Beatles’ catalog.

Though his greatness was more about his feel and creativity than his remarkable technique, this tune, the first track on the band’s self-titled debut, certainly demonstrates his fast right foot. Bonham subdivided his hi-hat notes to create the quick bass drum triplets that became permanently identified with him.

Levon Helm’s unique brand of lazy funk combined elements of country, rock, and second-line drumming. This funky groove has a ridiculously deep pocket and though his fills might look simple on paper they were always musical and unique.

Clyde Stubblefield’s tricky percolating funk groove has three quick open hi-hat notes on the (2) e ah and the (4) e. The song’s title says it all. This groove is one of the most sampled of all time.

Speaking of sampled beats, Gregory Sylvester Coleman’s solo in “Amen, Brother” is accepted as the most sampled drum solo in music. This four-measure solo helped create hip-hop. This example starts at the 1:29 mark in the song.

Joseph ‘Zigaboo’ Modeliste on ‘Cissy Strut’ by The Meters (1969)

Ziggy uses both hands on his hi-hat to create his monstrously funky New Orleans—flavored groove on Cissy Strut. This groove has percolating accents and a swinging feel that made it a classic. Modeliste’s drumming has influenced countless other great funk drummers including David Garibaldi and Stanton Moore.

Barrett popularized the one-drop reggae groove where the bass drum was primarily played on count 3 and often omitted from the downbeats.

Billy Cobham on ‘Birds Of Fire’ by Mahavishnu Orchestra (1973)

Death metal bands could learn a thing or two about angst from Mahavishnu Orchestra. Billy Cobham’s powerful odd-meter double bass drumming made his reputation as a fusion drumming star and proved that this incredible band wasn’t afraid of the dark.

Mike Clark’s improvisational jam on this track looks and sounds a bit like a mosaic created from little pieces cut out of a linear funk book. It’s a fast and percolating groove with lots of dynamics. This song has stumped drummers trying to cop Clark’s unique and revolutionary approach for years.

It’s hard to narrow down Steve Gadd’s best grooves and fills because there are so many of them, but this New Orleans—flavored march elegantly encapsulates Gadd’s musical creativity and relaxed yet precise technique.

This is one of the greatest drum intros of all time. At the beginning Walden sounds out of sync with himself until he explodes, ripping single-stroke fills around his kit with precision and incredible ferocity. 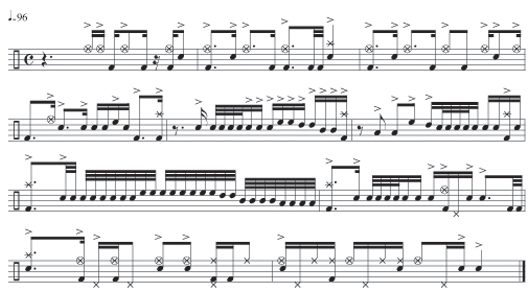 Though not actually a drum beat, since it’s composed of foot stomps and handclaps, this unforgettable yet simple groove was created from body percussion, so it qualifies. And its simplicity is its claim to fame as it’s the only pattern on this list that’s still routinely performed by thousands of non-drummers in the stands at sporting events.

There are several variations of the “Purdie Shuffle” but this half-time version has the ghosted snare notes characteristic of the others that would proceed it (most famously Led Zeppelin’s “Fool In The Rain” and Toto’s “Rosanna”), but also adds opened hi-hats on all the ah’s, played lightly with the tip of his stick.

Ricky Wellman’s groove on this track is a prime example of a go-go funk groove, a style out of the Washington, D.C. area that mashed funk, hip-hop, and dance music. There’s just a hint of swing here making it groove that much harder. [Editor’s note: you might recognize this as the inspiration for Nelly’s hit, “Hot in Here.”]

Stewart Copeland on ‘Message In A Bottle’ by The Police (1979)

Stewart Copeland changed pop music by giving it its first big infusion of reggae. “Message In A Bottle” helped popularize the genre with mainstream audiences while his use of splash cymbals made him popular with rock drummers. Copeland’s quick hands and syncopated rim-clicks are also well showcased here.

These are Peart’s best-known fills. As the iconic drummer who has influenced thousands of others we had to include this on the list. His unforgettable quads-in-sextuplets polyrhythmic lick is revealed in the second line. 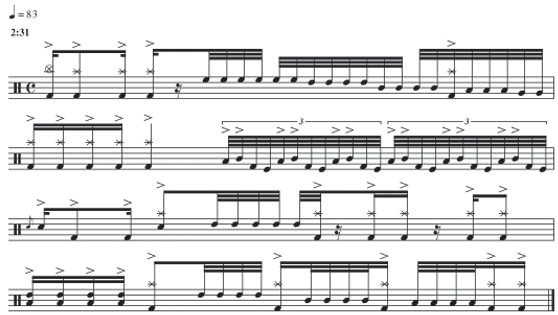 Chris Layton on ‘Pride And Joy’ by Stevie Ray Vaughan (1983)

Nicko McBrain on ‘Where Eagles Dare’ by Iron Maiden (1983)

Nicko McBrain’s ripping fill from this classic song, the first track off Piece Of Mind, his debut with the band, established him as a force to be reckoned with and is certainly an attention grabber. We’ve included the sticking for you aspiring metal heads!

This unforgettable double bass fill starts with Van Halen’s feet playing hertas (RLR L) and then moves up his Rototoms before returning to his double bass shuffle groove.

As the drummer who influenced thousands to start blasting, Dave Lombardo’s influence cannot be overstated. His herta fills (RLR L) into the midsection of this song show he can play slamming, memorable fills too.

Important drumbeats are often infectious. Once caught, the only cure is to master them. When this song became popular a generation of drummers went to their basements to get their double bass sextuplets together (this example starts at 4:32 in the song).

Todd Sucherman on ‘One With Everything’ by Styx (2003)

This prog-rock opus has two complex fills that reveal Todd Sucherman’s superb technical brilliance and musicality, as well as why he has become so respected by his peers. He holds nothing back.