How Did The Cajon Get Its Snares?

Perhaps, the biggest drum trend in the last 20 years is the growth of the cajon as an instrument. This despite the fact that it is, as former editor Andy Doerschuk used to say “just a box.” He’s right. Its name literally can mean crate, coffin, or similar terms. But it’s a box with amazing potential for music and inspiration.

Today, there are cajons that can do nearly everything. Builders around the world have created new models that represent styles, geographies and uses: rock, jazz, bass cajons, desktop cajons, lap cajons. Meinl alone makes more than 100 models.

Reading DRUM!’s special cajon issue earlier in the year and then seeing the film Ritmos Negro de Peru, (Black Rhythms of Peru) I became interested in this question: Who started putting snare wires in the cajon? To find out, I started writing to cajon makers, artists, Peruvian educators, and documentarians.

I didn’t get a lot of new answers, but I did get a deeper appreciation for the instrument. We do know one thing for certain: The modern cajon owes a tremendous amount to the guitarist Paco de Lucia and drumming legend Alex Acuña.

The cajon’s birth probably goes back to at least the 18thcentury in Peru. Some early models may have been made from tea chests. Tea was an important commodity and it was shipped in thin wooden chests. Slaves from Africa would have had access to them.

Keep in mind that before the Europeans arrived, there were no stringed or brass instruments in the Western hemisphere, only drums, flutes, and a variety of accessory instruments we would call noisemakers or toys.

Many of the later innovations in instruments, from the charango to, yes, the cajon drum, occurred in Peru. There are legends that the Spanish prohibited slaves from playing their African music, but those stories may be apocryphal.

What we do know is that the mixture of native music from Africa and South and Central America ultimately led to a flowering of beautiful rhythm that has conquered this entire planet. 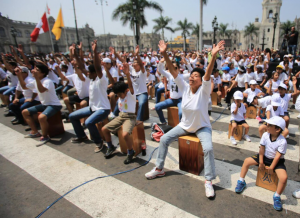 There is a Peruvian cajon festival in Lima most years. Source: Municipalidad de Lima.

What everyone agrees is that in 1978 percussionist and composer Caitro Soto sold a cajon drum to Paco de Lucia when he was on tour in Peru. Lucia gave it to his percussionist Rubem Dantas. The instruments were an immediate hit in flamenco music.

Seeing this new commercial opportunity drum builders began experimenting and we can imagine that within a very few years, nearly every idea we see in cajons today had been envisioned. Strings or snare wires were added to create texture and tone needed in flamenco. 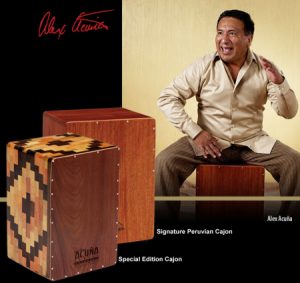 The cajon exploded forth from Spain. Acuña brought an instrument to the US and played with de Lucia and Chick Corea in 1981 to record “Touchstone” (released in 1982). That put the cajon on the map but it was not an overnight sensation. Instead, there has been a steady year-by-year increase in the use and popularity of cajons over two decades. In the ‘90s Toca started manufacturing cajons but business in them was fairly slow.

Slowly, other companies began making them too. By the time GonBops released the Alex Acuña special edition cajon in 2005 — one of the most popular models of all — the trend was in full swing. Today, many of the commercially available cajons are manufactured in Peru, as well as Thailand, China, Mexico, USA, Spain, and Germany. The cajon touches all parts of the world.

The connection of the Peru to slavery and the African-Peruvian community is crucial to its history and its role in the music there. I highly recommend the film Ritmos Negro de Peru about Rafael Santa Cruz for a picture of the connection between the cajon and the community culture from which it springs.

In the film, Acuña discusses in his experience how the instrument was viewed as part of the black community in his youth. “I was working in Lima as a professional musician 16 years of age in 1961.

I came from the north of Lima state in the  little town of Pavlitica where my five older brothers and I developed as musicians. It was there I saw the black community took the cajon and segregated it from everyone until the 1980s.

The ethnomusicologists may not know much about it because they have not visited [all] the tribes and people who originally played cajons and developed the instrument sounds and beats.” Who first put snare wires in the cajon? I’m waiting for some Spanish builder to raise his or her hand and say “I did it first.” Until then, though, I’ll just enjoy the music.

I am indebted to German Baratto of Meinl, Luis Cardoso of GonBops, filmmaker Hugo Massa, Ethnomusicologist Florent Wattelier, Alex Acuña, and others who continue to contribute bits and pieces of cajon history to this story

You Need A Cajon

Of course, being a box, you could build it yourself. And, It’s never too late to get started on cajon. DRUM! can help.

How To Get Started On The Cajon