Gretsch recently introduced its Brooklyn series of drum kits, named affectionately after the city where Friedrich Gretsch originally began producing drums back in 1883. The Brooklyns are high-end drums made by the same craftsmen that produce the much pricier USA Custom line, but with fewer options. This line is reminiscent of an earlier era thanks to the inclusion of a few retro features certain to please Gretsch Brooklyn review purists. 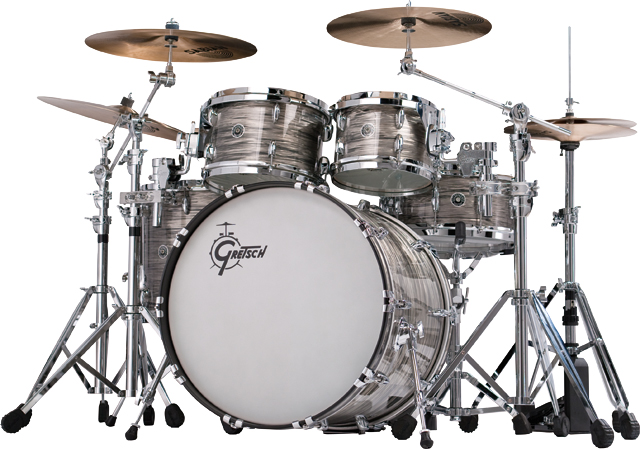 There are six configurations available ranging from bebop to large bass drum rock kits with add-on drums. You can order the kits with a matching wood snare or as a shell pack without one. There are also several Brooklyn chrome over brass snare drums available.

The kit I received was a shell pack with a deep 22″ bass drum, shallower 10″ and 12″ mounted toms, and a 16″ floor tom. The kit came with one of Gretsch’s metal snare drums — an eight-lug 14″ x 5″ model. The snare drums normally feature 20-strand wires, though my review unit came with a 40-strand set.

While there are similarities between the new Brooklyn series and Gretsch’s flagship USA Custom line, there are important differences, too. Instead of the USA Custom’s 100 percent maple shell, the Brooklyn drums have a 6-ply maple/poplar hybrid shell that’s designed to be punchy yet warm.

The tom and snare shells are 0.22″ thick and the bass drum shells are 0.31″ thick. Both lines have Gretsch’s classic 30 degree bearing edges and Sliver Sealer applied to the shell interiors and come with “straight” shells (sans reinforcement rings).

The snare drum had a 1.1mm chrome over brass shell that was rolled at each end to add strength to the drum.

All the shells had a Brooklyn sticker and serial number inside. 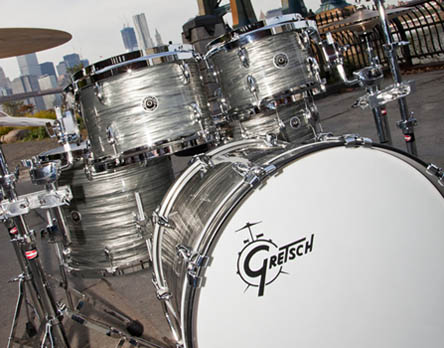 The Brooklyn kits come in eight different finishes including four Nitron wraps and four satin lacquer finishes. My review kit had the satin mahogany finish, which was very attractive and perfectly done. The lacquer finishes have satin natural blonde bass drum hoops that contrast nicely with the rest of the kit. Other musicians complimented its appearance at a gig, which is because it’s an undeniably tasteful finish you’re unlikely to ever tire of.

The snare drum was nicely chromed with a knurled pattern around the center of the shell.

One similarity between the Brooklyn drums and the USA Custom line is that most of the drum hardware is the same. Both kits have the same lugs, bass drum claws and spurs, floor tom legs, tom suspension rings, and brackets. The snare came with the Lightning throw-off and butt plate. All the hardware was nicely chromed and looked great. The kit also has a round black-and-pewter badge that will likely please Gretsch buffs.

One very cool and retro feature of this kit is Gretsch’s new “302” 3mm double-flanged hoops. Triple-flanged hoops have an extra lip at the edge where the stick meets the hoop that strengthens them and is less damaging to your sticks during rimshots.

These hoops are thicker and much more rigid than the flimsier double-flanged hoops that graced the kits of the distant past. They appear to be about 1mm thinner than the die-cast hoops on the Renown kits and have a slightly rounded edge that should help minimize stick chopping yet they are very strong. They’re actually thicker than professional 2.3mm triple-flanged hoops.

And if you’re a Gretsch fan, you’ll also be pleased that the 10″ and 12″ tom hoops have the traditional five-lug design.

These kits aren’t inexpensive so I consider this a significant oversight. Gretsch should immediately rectify this since a tom arm and clamp are as necessary as the legs for the floor tom or the spurs on the bass drum. The jazz kit with the 18″ bass drum does include a mount on the bass drum and a tom arm, suggesting a bit of a double standard. 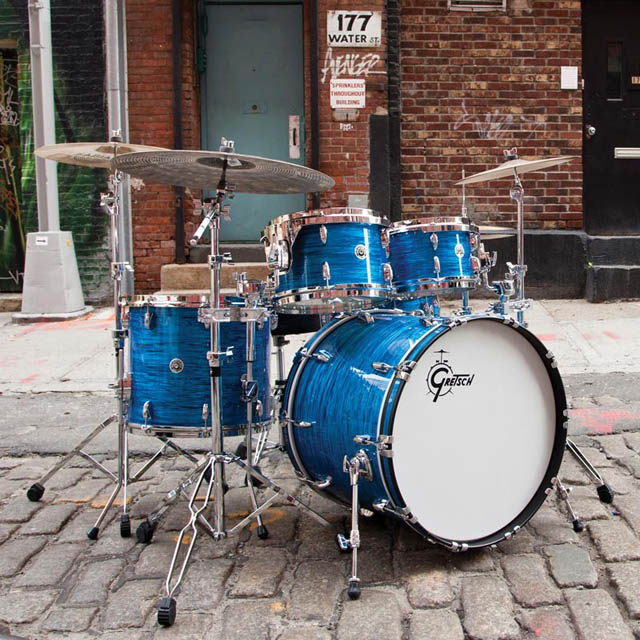 Another criticism is with the Lightning throw-off and butt plate. After using these at home and on a gig I would recommend the company quietly retire the design. If you’re not familiar with this unit, it’s a clamshell/flip down style that opens away from the drum rather than to the side. It has a long handle that extends above the edge of this 5″ deep drum where it can impede your rimshots.

Unlike most modern designs, the fine-tuning knob is located at the opposite side of the drum, doubling as a butt plate of sorts. If you ever need to drop the wires or tweak the wire tension you’ll need access to both sides of the drum, placing the throw-off and butt plate at the 9 and 3 o’clock position — whether you prefer that orientation or not. As such, flipping open the unit is likely to crowd your knee.

While every modern throw-off uses drum key–operated screws to loosen the snare tape/wires (including the nice one on Gretsch’s Renown kits), this one uses the cheap garden-variety flathead screws found at a hardware store. One could easily scratch the drum’s beautiful finish if the screwdriver were to slip out of the slot while tightening it. Furthermore, the screws aren’t chromed.

If you do have to adjust the tape (as I did), a pair of needle nose pliers will come in handy to grab the tape since it comes out the underside of the fine-tensioning unit. While I like the retro vibe of this kit there’s little sense in retaining the inconveniences of a bygone era, especially since Gretsch offers other far-superior throw-off units to this one already.

Normally, I’ll unpack the review kit, tune it, set it up, and play it before taking it on a gig. However, this time circumstances dictated differently, so I quickly tuned the drums up and threw them in the car for a small club gig I had that night.

The snare proved to be a wonderful surprise since I mistakenly assumed from its appearance that it was a steel-shelled drum. The drums were not miked but I immediately noticed the snare had a great fat tone with a good balance of higher frequencies. My first thought was that it would record well in the studio. After consulting with my iPhone on the drum’s shell composition, I knew why it sounded so good.

The rim-click was as loud as if from a die-cast hoop and my rimshots sounded awesome. The single-ply Gretsch Permatone/Remo Ambassador coated batter heads were also included on the toms and offered good sustain.

The bass drum came with a coated Powerstroke 3 batter head and a coated logo head. It had a deep, fat tone that sounded quite good as well. This is a solid rock bass drum with ample low-end punch.

The toms performed quite well, too. They were punchy, with good attack, tuned up easily, and had a really nice tone. For this gig, I omitted the 12″ tom and just used the 10″ and 16″ floor tom, but the size difference between the drums made the smaller drum sound a bit quiet compared to the rest of the kit.

I’d failed to anticipate the physics. A sound chamber with a volume of 550 cu. in. can’t compare in amplitude to one of 2,815 cu. in. The larger 12″ drum would have worked better, though if the kit had been miked it all would have been a moot point.

These drums look and sound great and overall offer a lot of nice features, with the exception of an outdated throw-off design. The Brooklyn series is a great kit for any professional drummer wanting a fat and punchy sound that’s a more affordable alternative to the company’s high-end USA Custom line.