Fabrizio Moretti: This Is The Strokes 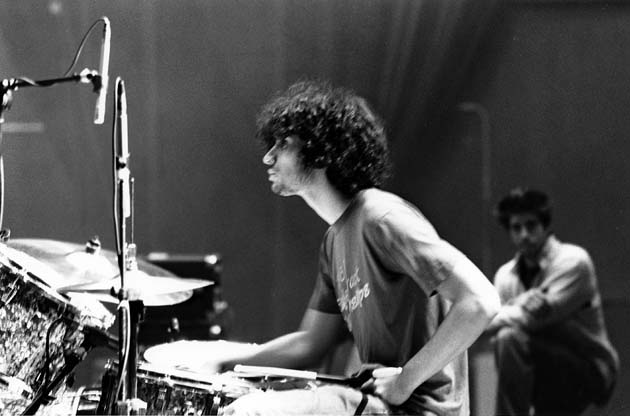 The Strokes are what happens when a group of privileged NYC dreamers grow up learning rock and roll together, collectively abandon college for smoky studio time, hone a precision ’70s New York punk/Velvet Underground-esque sound, and hit it big … really big.

Fabrizio Moretti holds a strong, driving backbeat for the eclectic fivesome. He began banging around at the age of five. “Then when you get older you start to understand that an artist has to sketch to become a really good painter,” explains Moretti. His soft-spoken blush clashes with his New York street tongue to reveal an astonishingly modest and thoughtful man, considering the mostly unwanted rock star status he has achieved just in his early twenties.

With a basic grip on his instrument, Moretti began jamming with high-school buddies Casablancas and Valensi. “The only band I played with was these guys. We all started playing our respective instruments together. I didn’t feel like playing with anybody else because I was sort of embarrassed. I liked playing with those guys because they were my friends, and any mistake I made wasn’t too bad in front of them. I was around 14 when we started writing songs together, but it was never a band, we just hung out and wrote songs.”

After picking up a second guitar and bass, the Strokes took form and there was a distinct time of recognition where big decisions were made. “It wasn’t like, ’Wow we’re good enough.’ It was more like, ’Dude, we’re really not good enough. Either we sit down and really work on becoming a unit, instead of thinking we’re like hotshot rock and rollers without having anything to back it up, or we just stop doing this.’ That’s when we all stopped doing all the other things we were doing and sat down and started working on it.

“I was just a goof-off drummer. I would just play as many fills as I could possibly play – it was ridiculous. So we all sat down and realized we needed each instrument to be forums for each other so the other instruments can stand on them and be heard. And the best way the drums can do that is with a steady, driving force. Then the bass can dance around melodically and the guitars can be their own thing and on top of all that the singing can sprinkle it all with melody. I don’t think a cocky 17-year-old could come to that conclusion by himself, so I’m happy I was with these guys, my friends.”

Moretti’s maturation as a musician is on full display throughout Is This It?, the band’s hit debut release. The 11 tracks are crisp and clean, roll with no fluff whatsoever, and consequently, have very few fills to break the drive of Moretti’s tight, straight groove. “There are fills in there where it’s appropriate and where there’s something that calls for it. Fills can be great and drumming is an amazing thing when it has all these beautiful things going on. But I guess I can humbly say that our songs don’t require that. They need a steady, driving push. And if we had fills there, the head bobbing that a person is doing would be broken for a second.

“If I were to fill I would almost separate myself from the song. But if you play according to how the music is moving you and how it is driving, then you sort of hide yourself in it. I don’t really crash into beats. I try and stay clean and steady going into a beat. When a crash is necessary, the ride does that. I have a magical ride. I used to have a bigger, more elaborate setup, but the more we started maturing with our songwriting, the quicker the extraneous pieces started disappearing. Now I’m down to a four-piece with hi-hats and a ride.”

With a young band growing so much so fast, it helps to have, well, a guru of sorts. Or maybe a guru exactly. Yes, the Strokes have their own guru and his influence reaches all the way out to Moretti’s stroke. “JP the Guru once told me, ’Man you need to hit those drums as hard as you possibly can.’ At first it was hard to stay steady and hit hard. Change is just difficult. I started trying to beat the drums harder and play louder, but then my steadiness started to go. So I’d bring on the metronome and practice staying steady and hitting as hard as I could. Then I found that my timing was dwindling because I wasn’t hitting hard enough, so the harder I’d hit the steadier I’d get. Then I started breaking a lot of sticks so I went to a heavier stick. Now I’m in a comfortable spot but I know I have to get better. I still have a lot to learn and it’s not over by any means.

“But it wasn’t until JP said that that the band came together. The guitarists were doing their thing and Julian was coming into his own and the last part was me. You could feel a change happen where we all became so comfortable. There’s a certain intensity that’s gained when the volume is broken. Everyone’s hooked up to the same life support, and when someone starts to dwindle, everyone starts to dwindle. That’s why hitting hard comes second to playing with all your love. Then everyone starts to smile a little more and dance around.”

The band was smiling and dancing around in Glasgow, Scotland one particular evening when their passionate young drummer broke his hand. “They say I ’fell out of a bus,’” he laughs quietly. “Let’s just put it that way. I fall out of buses a lot when people antagonize me. It made me learn a lot about myself; it made me realize how vital the band is to me for my well-being. When that’s taken away from me I’m sort of lost. I was out for six weeks. It could’ve been much worse. I’ll never ’fall out of a bus’ again.”