Elvin Jones is often called by critics a “force of nature,” as if the music just happened, like a hurricane or tornado. That’s mainly because there are so few words for what Elvin did. But Elvin was one of the most creative and thoughtful musicians who ever put stick to skin. At a Zildjian event honoring great American drummers in 1999, Elvin sat onstage with Max Roach, Roy Haynes, and Louie Bellson. Bill Cosby gave each musician a prop and asked them to play for one minute each.

One guy got a bucket, another a block and a pair of sticks. Elvin took nothing. He sat in a chair and using only his hands, played a spontaneous composition on his knees. Somehow, using nothing at all, he conjured a variety of sounds and melodic ideas that most of us couldn’t pull together with a full drum set. His peers sitting nearby, nodded, as if saying, “There’s the man.” Check out the Best Elvin Jones albums for yourself on these recordings.

My Favorite Things (Atlantic) 1960. Among other things Coltrane reinvented the soprano saxophone, partly due to this album and the title cut. All the standards such as “Summertime” on this recording are amazing and worth the price of admission if you haven’t been here before. 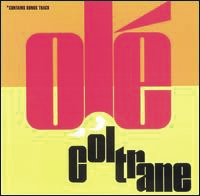 Olé Coltrane (Atlantic) 1961. The Moorish modes and rhythms of Spain served as inspiration on this recording that signaled how far Coltrane was moving from the mainstream. Both “Olé Coltrane” and “Her Ladyship” are outstanding tunes on this hard-charging set that includes Freddie Hubbard on trumpet. 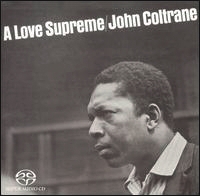 A Love Supreme (Impulse) 1964. One of the best jazz recordings ever. By this time Coltrane was moving beyond the modal spaces he’d first hunted with Miles and fully integrating his spirituality into the music. Elvin demonstrates over and over how he and Jimmy Garrison were incredibly sensitive as sidemen. 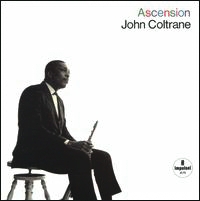 Ascension (Impulse) 1965. This recording was a milestone for Trane and Elvin as they ventured into the freer group improv style started by Ornette Coleman. It’s basically one tune for the whole album. 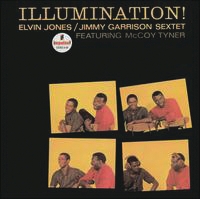 Illumination, Elvin Jones and Jimmy Garrison (Impulse) 1963. This is one of three albums Elvin made as a leader for the Impulse label and a great record, though not everyone’s cup of tea. The band was adventurous with odd combinations of horns and the out-there duo of Sonny Simmons and Prince Lasha. Great challenging music as much in the tradition of Ornette as Coltrane. Listen to Elvin’s drum solo or the brushes over Tyner’s piano on “Oriental Flower.” 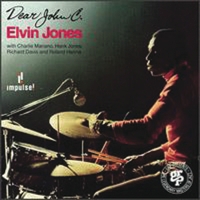 Dear John C. (Impulse) 1965. This is a subtle but bopping session from 1965, sometimes described as Elvin’s love letter to his musical partner. It’s a quick, well-arranged recording and a good place to dip your toe into Elvin in the prime Coltrane years. Listen to Richard Davis to understand deep bass playing. Tunes like “Anthropology” have a Charlie Parker feel. 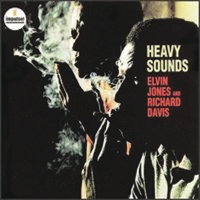 Heavy Sounds (Impulse) 1968. Elvin Jones and Richard Davis. This features Elvin’s only appearance on guitar on “Elvin’s Guitar Blues” and his mallet playing on “Summertime.”

Puttin It Together (Blue Note) 1968. With Joe Farrell on 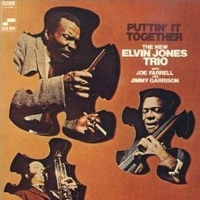 sax and his rhythm partner Jimmy Garrison on bass, this was bound to be a bluesy album and it is. It’s got the corny military drumbeat that introduces “Keiko’s Birthday March,” which includes a great solo by Elvin. It’s well recorded and the rhythms and drum tracks are awesome. 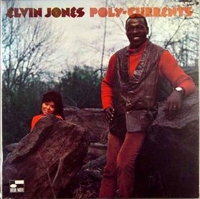 Poly-Currents (Blue Note) 1969. This is the classic Elvin album. If you only get one, get this. Joe Farrell, George Coleman and Pepper Adams are on saxophone, Wilbur Little on bass and Candido Camero on congas. This music is not just about multiple meters. It’s beyond meter, harmony, and tight structures. There’s no piano on the date so many tunes seem to lack harmonic centers, relying on the bass to keep time and the horns to hint at chords. Jones is constantly shifting around the set letting the rhythms develop as Camero locks into him. There were many other great albums on Blue Note in the next five years, which were recompiled in the Mosaic box set, The Complete Blue Note Elvin Jones Sessions. 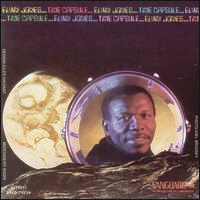 Time Capsule (Vanguard) 1977. Jones’ live band was a powerhouse confection throughout the 1970s. This album captures some of that power in a great set with wonderful horns, anchored by George Coleman. Also features Milt Hinton on bass.