Drum Workshop has purchased Slingerland, and the company will release a new generation of Slingerland instruments next year, it was announced today.

“No question Slingerland is one of the great American drum brands,” said DW President and CEO Chris Lombardi. “It’s also near and dear to my father’s heart. He played Slingerland, as did many of his friends and fellow drummers. The history is undeniable.”

Chris Lombardi and a host of friends and family made the announcement to his father and DW founder Don Lombardi at Don’s birthday party earlier this month. After unveiling a pristine 1958 Slingerland in Marine Pearl with all vintage hardware as a gift, Chris played a video message from Gibson President and CEO James “JC” Curleigh informing Don that DW was now the owner of the Slingerland name. 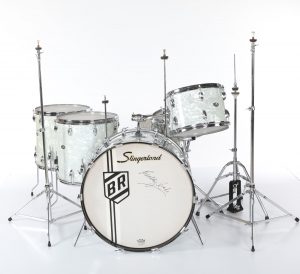 “We’ve had some iconic brands in the past, and one of them was Slingerland,” Curleigh says in the video. “Over the last year we’ve really looked to put that Slingerland brand and that drum essence into the right hands…. you are now the proud owner of the Slingerland brand.”

To which Don replied with a look of astonishment toward the crowd gathered to celebrate the occasion in DW’s factory showroom, “Is that true?” The look turned to delight when he glanced at his son as the video finished.

“It was a huge surprise, I couldn’t have been more surprised about this,” Don Lombardi said at the party. “I know what I’ll be waking up in the middle of the night thinking about now. It’s a real part of the history of American drum making, going back to the very beginning.”

Slingerland changed ownership multiple times in the ‘70s and ‘80s, until Gibson bought it from Gretsch in 1994. (Gretsch was purchased by DW in 2016.) Gibson produced the drums for a time but soon ceased production. The company filed for Chapter 11 bankruptcy in 2018, leaving the future of the Slingerland brand uncertain.