Drums Celebrate The Past, Explore The Future At Monterey Jazz Fest

STORY AND PHOTOS BY NICOLAS GRIZZLE

The 2019 Monterey Jazz Festival has a tough task of catering to an audience of seasoned jazzheads while keeping an eye on the future. That means acts like smooth jazz legends Chris Botti and Diana Krall, delightful experiences like the Christian McBride Big Band, and jazz-ish­­­ acts like Tank And The Bangas, Larkin Poe, and Samba Da will share stages throughout the weekend, as they did this year. If one were to try and see as many different acts as possible throughout the three-day event, what comes through is the impact of jazz on many genres, and the versatility of the players in these groups.

It’s rare to see this many amazing drummers in one place. We were able to attend the first two days of the festival, and though it was tough to narrow down here are three drummers we can’t stop thinking about even two weeks later. 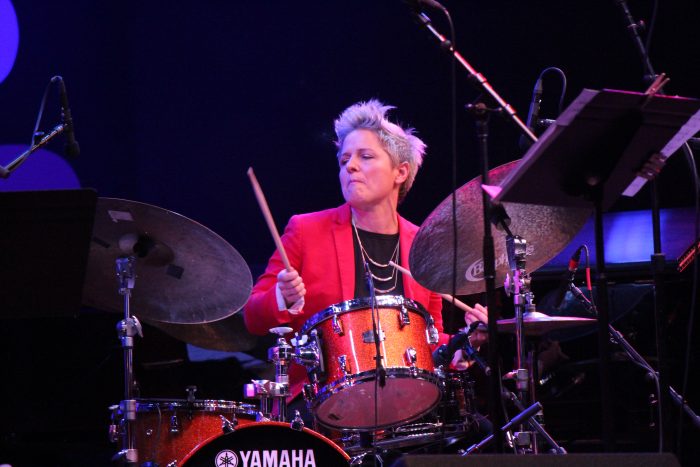 I had only planned to stay for a song or two. By the time I realized any time had passed at all, the set was almost over. Good music has a way of captivating an audience during a transcendent performance; great music has a way of doing that throughout the ages. Mary Lou Williams hadn’t performed at the Monterey Jazz Festival since 1972, but here she was again in 2019 sounding as fresh as ever. No wonder Duke Ellington called Williams “perennially contemporary.”

Drummer Allison Miller and bassist Derrick Hodge joined forces as the festival’s co-artists-in-residence this year, each performing with at least three separate groups throughout the weekend. “Soul on Soul: A Tribute to Mary Lou Williams,” which honored the legacy of the underappreciated composer and performer who passed away in 1981, showed the artists’ care in preparing for the festival.

There were moments of musical out-of-body-experience at this main-stage performance on opening night. Like when Hodge slipped into his own musical universe at one point and incorporated the riff from “A Love Supreme,” never dropping the original tune’s feel. Miller was right there, somehow anticipating his changes and grooves, and breathing her own personality into the spiritual interchange. The three—Williams, Hodges, and Miller—seemed to be reading from the same astrological chord chart, which brought them all together to hover above the stage and direct the two corporeal forms to make sound waves and memories that would not soon dissipate.

Singers Jean Baylor, Johnaye Kendrick, and Michael Mayo didn’t just weave their voices, but 3D-printed a futuristic serape of inconceivably harmonious notes from Williams’ perennially contemporary mind while the band sat back and admired the composition and spirit of the musicians bringing it to life. At one point pianists Carmen Staaf and Shamie Royston dueled, but it was more like a capoeira style dance-fight—looking to their partner for the next move, making way for their “opponent’s” motions and smiling at each other during the exchange.

It was the players that dictated the arrangements for this project, says Hodge. He and Miller considered the artistry of the performers and “worked backward from there,” he said at a panel discussion about the project later that night. “We wanted to allow their presence as artists to shine through.”

Miller agreed, and even put her own playing on the backburner to make producing a priority. “The last thing I’m thinking about when I’m doing something like this is the actual drumming part,” she said. The two worked extensively in pre-production, making decisions about the musical direction and arrangement in addition to the performance aspect. It paid off in a seamless performance, with no inkling that the two had never met in person until just three hours before downbeat.

Miller also lit up a smaller indoor stage with her band Boom Tic Boom, and also with Parlour Game, which she co-leads with violinist Jenny Scheinman. The variety of music in these performances only served to highlight Miller’s versatility and distinct musical voice. The weekend was a showcase the creative drummer and composer at the top of her game. 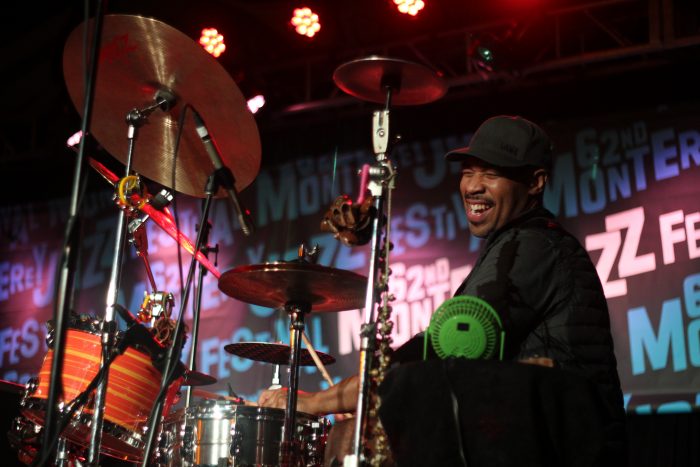 Eric Harland just played one of those solos that makes you question if the universe actually exists, or if our universe is a giant mason jar and we’re all just some kind of self-aware fireflies buzzing around to the delight of some interdimensional being, who in turn is a firefly for a larger interdimensional being. Set in context of the otherworldly Circuits trio, led by Saxophonist Chris Potter with James Francies on keys, I’m beginning to think it’s fireflies all the way down.

I’ve said it before and I’ll say it again: Eric Harland is a bad, bad man. This time, he channeled that badness through the orange, four-piece Yamaha kit on the large indoor stage at the Monterey Jazz Fest. I’ll admit, there are times when I tune out of a drum solo. This was not one of them. Though there were plenty of solos during this set, Harland’s musicality and storytelling kept me engaged, eagerly awaiting the next plot twist.

Saxophonist Potter stepped back, literally, to give the stage to Harland and keyboardist Francies, who propelled the Circuits starship to new uncharted worlds with two synthesizers, one lead and one bass.

This is when the life-questioning solo in question took place, erupting like Pompeii during the calamitous “Exclamation.” He’d surpassed metric modulations, bending time to fit his own narrative. Harland’s playing was at times so nasty, so purposefully sloppy, so close to the beat that its rhythmic dissonance was almost painful. Even the most scrunched-face-head-nod combo could not convey the badness of this man. A quick glance around the audience after a particularly riotous section saw several oh-no-he-didn’t headshakes.

Yet through all this raw musical energy, his dynamic control and creativity showed there was a plan in this seemingly chaotic composition. Even in the most unhinged moments, Harland’s drumming is comforting. He earns the trust one would give a pilot, and in the end delivers us to a pristine white sandy beach we’ve only seen in a nature documentary—the azure waves gently lapping at the shore the only evidence of the ferocious energy created moments ago through his playing. 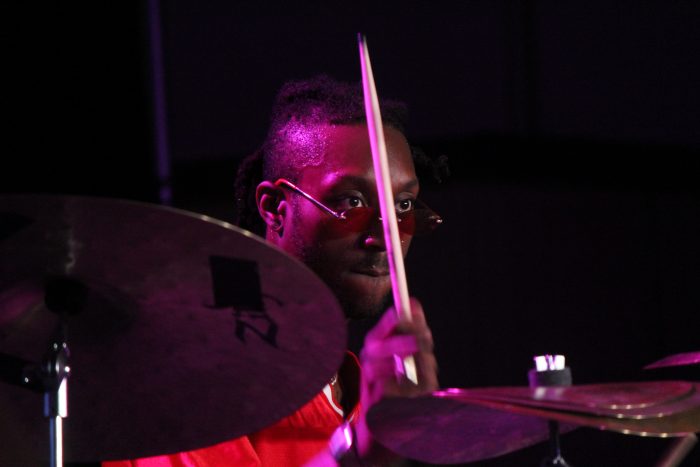 Mike Mitchell is the definition of drum chops, and he can go from zero to 60 in the blink of an eye. His set with Derrick Hodge was no exception, but it also showed the softer side of ferocity.

I saw Mitchell blow the minds of even those who knew what they were in for at last year’s MJF with pianist Cameron Graves. This year he showed even more dynamic versatility with bassist Hodge in a group with piano, organ/synth, and a few tunes featuring Casey Benjamin tearing it up on alto sax.

Hodge took the music places nobody could have predicted. And every player on stage wowed the audience with his virtuosity. It’s was about more than just chops, though, with Mitchell’s listening skills coming into play as much as any double stroke or rudiment.

During tender moments, Mitchell didn’t so much lay back as play to the feel Hodge and the band was leaning into. His dynamic playing gave life to the drumming in these moments—where playing sparsely would be been the safe bet, his soft double strokes over the entire kit kept the set’s intensity up during these moments.

And when the band was unleashed, just forget about it. The one up, two down drum set got a workout, as did the double bass pedal. At one point, I’m pretty sure I heard a succession of 17th-stroke rolls on the bass drum. Mitchell’s sharp, quick stacks are a perfect fit for his blazing fast speed—my favorite is the one that is shaped like a stack of Pringles, with its variety of sounds changing depending on where it’s struck. His drumming sounds like it perpetually lives in the future, no matter what time period the present happens to be.

Every time you think you’ve heard peak-chops, Mitchell rears back and lets you know he’s not done yet. Just the amount of physical energy required to play a full set this way is impressive, let alone the musical ability. This goes beyond any “gospel chops” videos you’ve seen. It’s indescribable.

Mitchell’s performance didn’t have the storytelling feel of, say, an Eric Harland, as it was more improvised. At one point, Hodge asked for a singer in the audience to come up and give him a melody, turning the band into an improv troupe. Two young women sang extended melodies, which Hodge played on bass, and the band created a song out of them just like that. This is where Mitchell really shines. In this setting, his looseness fits right in and helps the band’s transitions feel more natural and less exploratory.

If you have a chance to see Mitchell live, whether it’s with Derrick Hodge, Cameron Graves, Stanley Clarke, The Robert Glasper Experiment, or his solo project as Blaque Dynamite, do it. His playing, kept consistent throughout a full set, expands the idea of what can be done on a drum set. 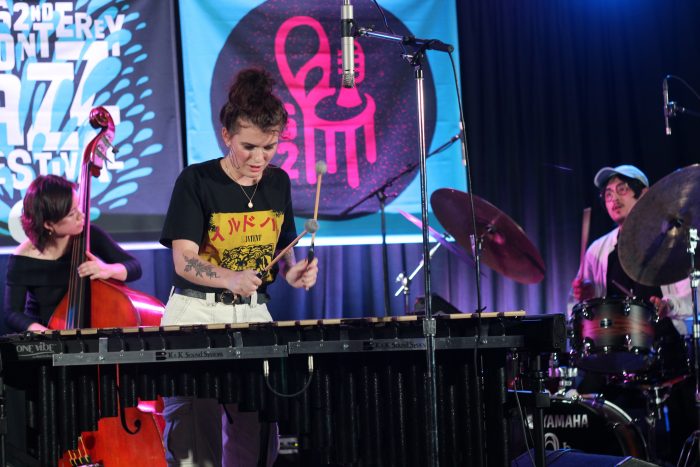 “Does anybody in the audience have a guitar looper pedal, by chance?” The 21-year-old vibraphonist Sasha Berliner’s pedal wasn’t working, and it was an integral part of her performance. A few minutes later, the Monterey Jazz Festival staff came through with a solution, and Berliner immediately proved the delay was worth the wait. As she layered vibe sections over one another, the quintet expanded to include another vibraphone on this indoor stage Saturday night.

The band included a pianist on baby grand and Fender Rhodes, a stand-up bassist, an EWI player, and a drummer (JK Kim). Berliner’s compositions are decidedly modern, but unmistakably jazz. Unlike many other acts at the festival that blended genres of rock, hip-hop, R&B, blues, and jazz-adjacent styles, this felt more like jazz with a modern ear as opposed to modern influences.

Berliner’s got chops, of course, but it’s her compositions that grabbed my ear. The catchy tunes float effortlessly when she sings through her instrument, and the band does well to support them. There were solos, of course, but none took over the tune, which was appreciated. It was a good balance of ear candy to keep the casual listener engaged and meaty musical compositions to appreciate on a deeper level.

The San Francisco-based artist started playing vibraphone at age 13 and is currently working on her bachelor’s degree at The New School of Jazz and Contemporary Music in New York. It will be exciting to follow the career of Berliner and see where her ears lead us next, starting with her forthcoming album AZALEA, which is slated for release in December.

Drummers Of The 2018 Monterey Jazz Festival