Drum educator Mike Johnston of mikeslessons.com has switched drumstick endorsements from Vater to Vic Firth. “In case you didn’t figure it out earlier this week, I have an announcement to make,” Johnston announced via Instagram on October 18, including the hashtags #vf15 and #vfaj1.

“While we are saddened with this change, we are very grateful and appreciative of Mike Johnston and everything he did as a Vater Artist,” said Chad Brandolini, director of artist relations for Vater Percussion.

“It’s been exciting to see Mike’s career and the drum education community grow over these years,” he continued. “He changed the game, without a doubt. “Not only has he educated and inspired countless musicians around the world, but most importantly he has instilled confidence and respect in his students.” 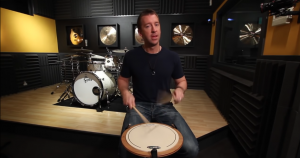 Vic Firth’s announcement on Instagram hinted at some video content to come from the partnership: “Known as one of the pioneers in online drum instruction, mikeslessons.com remains one of the most popular drum education platforms to date.

“Education has been and always will be a top priority for Vic Firth and we are so thrilled to have Mike join our powerhouse team of educators. We look forward to bringing you new educational content from the man himself, Mike Johnston.”

Johnston’s signature stick will remain in production at Vater, but it will be rebranded. “As far as the hickory and maple 2451 models go, the design will stay exactly as they are and remain a part of the Vater product line,” said Brandolini. “Both versions will simply be renamed Vater 9A and Sugar Maple 9A and will continue to be available through retailers around the world under the 9A designation. Exact same design, same specs, same high quality, same hickory and maple options, just less ink on the label.”