Hybrid kits that mix acoustic and electronic percussion are a great way to extend your sound palette. If you have an electronic drum module in your system that has an unused trigger input, why not put it to work with something you can assemble yourself, a DIY drum trigger?

A piezo-based drum trigger is easy to build, and it can be attached to any acoustic drum in your kit. Although there are a number of off-the-shelf triggers on the market, it’s a lot cheaper to build your own. And you might have the parts already in your possession.

(A contact mike like the one above takes ten minutes to make and costs less than $5 in parts.)

If triggering isn’t your bag, no problem: This piezo pickup project provides a cheap and easy way to amplify sounds that would normally go unheard, while allowing you to process subtle harmonics that are below the threshold of audibility.

Ever wonder what a Slinky really sounds like? Care to send your cymbals or some scrap metal through a stomp box? The DIY contact mike lets you do both, and a whole lot more. 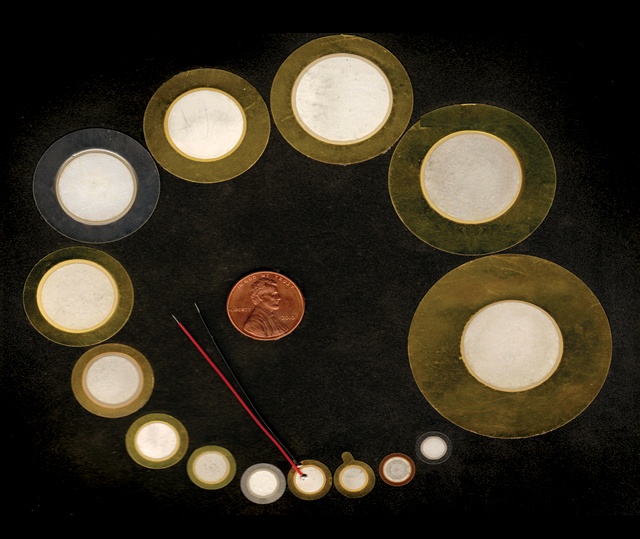 A piezo is essentially a thin metal disc with a hard, ceramic material in the center. As a high-impedance, passive transducer, it converts mechanical energy to electrical energy. The name piezo has its roots in the Greek word for press or squeeze, which provides a clue as to how the disc works: Crystals and certain ceramic materials generate an electrical signal when stress is applied.

Once the piezo is hooked up, it is referred to as a “contact mike” because it needs to touch the object we want to amplify: Place an amplified piezo against a surface and you will hear vibrations that are typically inaudible. A contact mike doesn’t pick up sound from the air like a dynamic or condenser mike, so it can be used at higher volume levels.

Well-made piezoelectric transducers can be very sensitive, making them perfect for amplifying acoustic string instruments such as guitars and banjos. The only downside is that the piezo’s frequency response is weighted toward the midrange, and they can sound tinny depending on what you use as an amplifier. Nonetheless, for the purposes of a cheap drum trigger, they’re just right.

A piezoelectric device also works in reverse: applying an electrical charge will cause the piezo to make a sound. Because the discs are inexpensive to build and fairly robust, they’re used in everyday products that need to buzz or beep, such as toys, appliances, and mobile devices.

That means they’re everywhere, and the savvy DIYer can source piezo discs easily from broken and discarded electronics. I have students who treat their DIY piezo project as a treasure hunt, trying to see if they can build one completely from scrap.

If you’ve decided to source your piezos this way, it’s very likely that the discs will already have a pair of wires attached. That makes things a lot easier, because all you have to do is attach the ends of those wires to the wires of a shielded cable and you’re ready for action. For the sake of this article, however, I will step through the process of wiring up a disc from scratch so you can see what’s involved.

In this project, we will connect the piezo disc to the wires in a standard, shielded guitar cable: we will attach the strands of the outer shield to the metal disc itself, while the cable’s center conductor wire gets attached to the disc’s ceramic center.

Although you can hear how a piezo contact mike sounds by using alligator clips to make the connections, such a flimsy setup won’t survive any practical uses. Therefore, we need to solder the wires to the disc in order to use it as a drum trigger. 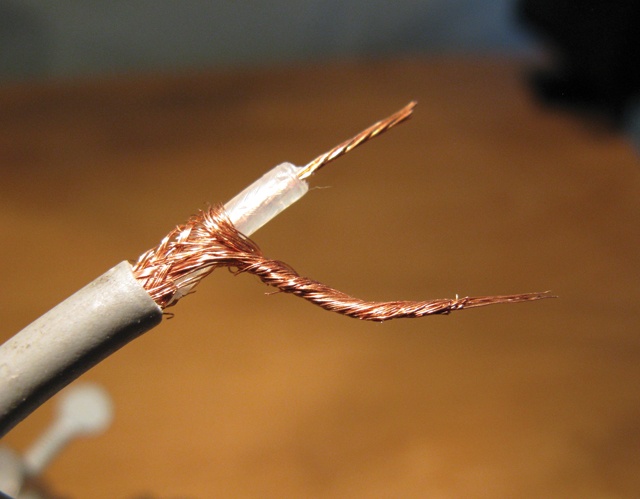 Soldering a cable to a piezo is fairly straightforward when you have the right tools, though it can be a bit tricky if you don’t have soldering experience. The delicate part has to do with heating the disc. If the iron touches it for too long you will irreparably damage the disc. Thankfully, piezos are relatively cheap (depending on where you get them), so don’t be afraid to destroy a couple as you learn this skill.

You will get the best results using a modern soldering iron that has a fine tip. For example, the ubiquitous Weller WES51 soldering station includes the proper type of soldering iron, a holder, and a sponge (which you will dampen and use to clean the iron’s tip when it’s hot). If you don’t want to buy a soldering iron, it’s likely you know somebody who has this model or something similar.

For this project, you will also need rosin-core solder, a pair of wire strippers, shielded cable, and a 1/4″ plug (like the kind used for electric guitars), and electrical tape. If you can sacrifice a cable that already has a 1/4″ plug at one end, that’ll save you the hassle of soldering the connector later.

To prepare the cable, strip away 0.75″ of the protective layer to reveal the first layer of wire (known as the shield). As you pull the shield to one side and twist it together, you will be left with the coated wire in the middle. Strip off the insulation to access the internal wire, and twist its strands together. (This center conductor wire needs to be longer than the shield wire in order to mitigate stress on the solder connection, because it reaches further into the disc.)

Before you plug in your soldering iron, it’s a good idea to wrap a bit of solder around the tip. As the iron heats up, the solder will melt around the tip and protect it from oxidizing when not in use. Then, just before you begin soldering, wipe the tip on the damp sponge to clean off any excess solder.

Now it’s time to tin each of the wire strands. This is done by heating each one up with the iron and then pressing the solder against the heated strand. The goal is the let the wire strand soak up a fair amount of solder, which will help it make a solid connection when you attach the wire to the disc.

At the other end, you will attach the connector of your choice. Because you’ll be using these as drum triggers, it makes sense to use a standard 1/4″ guitar plug. However, you can just as easily use a two-conductor 3.5mm (sometimes called an 1/8″) plug. The smaller one allows you to connect your contact mike to portable recorders and miniature amplifiers (such as the battery-powered RadioShack Mini Audio Amplifier, a staple for hackers and circuit benders).

Tin the two strands of wire on the cable as you did earlier. Next, tin each leg of the 1/4″ connector: Place the iron against them one at a time to heat them up and melt a bit of solder on them. Finally, attach the cable’s shield to the long leg, and the conductor strand to the short leg.

Simply hold the appropriate wire and leg together and press the iron down on both until the solder melts, then allow the connection to cool. Remember to tin the tip of your iron a little before you solder each wire down, and to use the damp sponge to wipe debris off.

If there is a chance that the two wires below the plug or disc will touch each other, wrap the center connection with a piece of electrical tape so that the bare wire is covered. Otherwise, the two wires will short each other out when they touch and the contact mike won’t work. (Shorting the wires will not damage anything, so don’t worry if they accidentally touch while you’re working. Just wrap the center lead when you’re done to keep them apart.)

Now it’s time to test the contact mike by plugging it into an amp. If the piezo is wired correctly, you’ll hear a sound as you scrape it along the surface of your workbench. On the other hand, if you hear a buzz, you may have reversed the wires. Use the iron to melt the connections and remove the wires, and then re-solder them in the right place.

To finish things up, use another piece of electrical tape to wrap both wires together as close to the disc as possible (again, being sure the two bare wires don’t touch each other). The idea is to leave as little room as possible for something to catch under the wires and pull them apart.

Because this project is meant to be a drum trigger, you want to make the contact mike as sturdy as possible. One method is to cover the solder connections with a layer of silicon sealant. When it dries, the silicone will provide a modicum of protection.

A sturdier way to protect the top of the disc is suggested by Nicolas Collins in his excellent bookHandmade Electronic Music. Collins suggests you start by covering the top of the piezo with a small piece of electrical tape, which you can cut to size or fold around the edges of the disc. Then, dip the entire disc assembly in Plasti Dip, a synthetic rubber paint used to create a grippable surface on hand tools.

Let the unit dry for a few hours. Although the coating changes the sound characteristics of the piezo to a certain degree, Collins says it makes the contact mike more durable, not to mention waterproof, should you decide to use the piezo as a hydrophone.

Once the coating is dry, attach the pickup to the head of one of your drums and plug it into the device you want to trigger. A patch of duct or gaffer’s tape is all it takes to keep the piezo on the head, preferably near the hoop where you won’t accidentally strike it.

I also recommend you secure the cable to the side of the drum so that it doesn’t get pulled accidentally. Once the trigger is connected to your drum module, you’ll have to adjust the input sensitivity settings to mitigate false or double-triggering issues.

The piezo’s sensitivity to vibration allows it to bring out the subtlest aspects of any object you attach it to. Anything that resonates is fair game — springs, wires, tables, gongs … you get the idea. There’s no need to hit the surface hard, let alone strike it at all. Clamp or tape the contact mike to a cymbal, and you’ll hear interesting timbres by simply dragging a wire brush or even your fingernail across the cymbal’s surface.

Because our piezo trigger has a high-impedance output, it is well suited to processing through the various stomp boxes guitarists and bassists use. While fuzz, phasing, and flanging are interesting, I find echo, reverb, and sampling delay-pedals to be the most musically interesting.

Once you hear a highly amplified sound looped with a sampling pedal and running through a distortion box, you’ll want to bring contact mikes and pedals to every gig.

Stefanie Eulinberg: Messing With The Kid