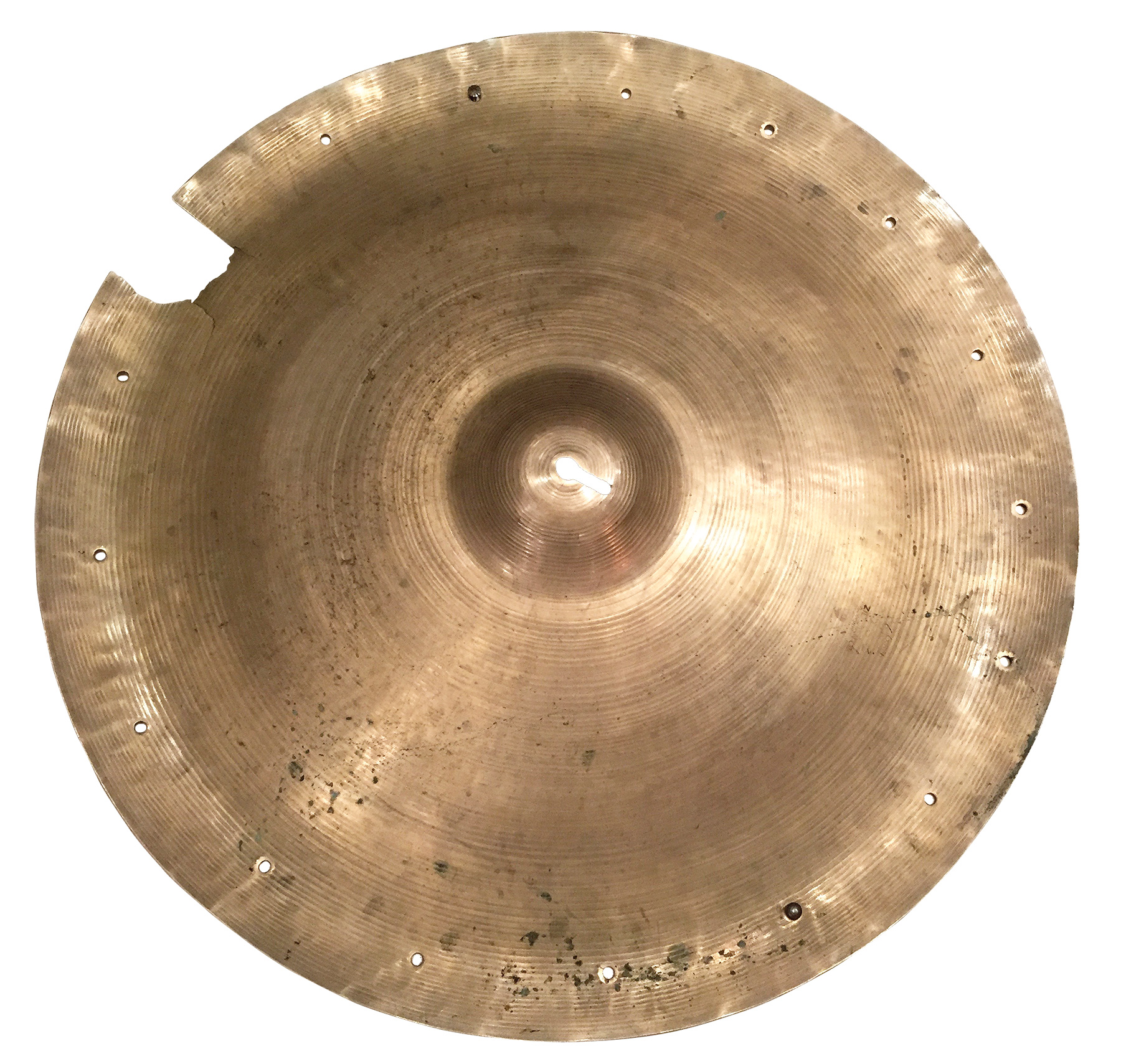 BY DONN BENNETT | FROM DRUM! MAGAZINE’S MAY 2018 ISSUE

People often ask how I find so much rare and vintage drum gear. The short answer is that most of the time this stuff finds me, or I just stumble onto it. Here’s the story of a very historic cymbal that recently fell into my lap and the work that went into authenticating it.

I’d been speaking with a friend for several months about collaborating on a drum project. After months of talks, he mentioned he’d found an old China swish cymbal in his storage and asked if I’d help him sell it. The cymbal had supposedly belonged to legendary jazz trumpeter and bandleader Dizzy Gillespie, one the early architects of bebop jazz who is considered to be one of the greatest trumpeters ever. It had been bought years ago in an auction of Gillespie’s estate.

This is the kind of stuff I live for! The cymbal is a well-worn 1950s A. Zildjian 22″ Swish with only two of its original 17 rivets remaining. There’s a big chunk knocked out of the edge of the cymbal and a very elongated “key hole” at the bell. This cymbal had clearly been around the block a few times.

I started digging around online and discovered that Gillespie had a very funky, old, riveted China swish cymbal that he liked all of his drummers to use. So, I got in touch with Kenwood Dennard, who had played with Gillespie in the 1970s. “Dizzy strongly encouraged all of his drummers to use the swish with rivets,” he said. “I wouldn’t have dreamt of arguing with him on that point. He loved that swish cymbal, not used as a crash cymbal but rather as a ride, with oh so much flavor.”

The cymbal is also mentioned in Gillespie’s book, To Be Or Not To Bop, which reads, “He had this old Chinese cymbal with beat-up ends and turned-up edges. Every drummer who worked with Diz had to play on that cymbal. It was given to him by Cozy Cole.”

I started thinking that this might be the same cymbal and realized it could be far more significant than I first thought. This cymbal might not simply be “a” cymbal Gillespie had used but rather “the” cymbal he used with his bands throughout his entire career. It has a distinctive and aggressive sound that immediately grabs your attention, and I can understand why Gillespie may have favored it.

I found several early videos of Gillespie’s band where what appears to be this cymbal is clearly visible and audible. The best example is “Blues Walk” from a 1958 concert in Belgium. You can hear the cymbal’s raspy tone and clearly see the sizzles and turned-up edge. One video even shows an inch-long crack that was probably the beginning of the missing chunk on the cymbal edge today.

None of this research proves this is Gillespie’s cymbal, but it does make a very strong case. I’m always digging for clues. If someone knows anything else about this cymbal I would love to hear from you.