If you want something done right, you do it yourself. The old adage appropriately sums up the motivation behind the establishment of Crush Drums And Percussion. Citing different goals and a different vision as reason for leaving their positions at Ddrum, the five cofounders of Crush set out to start a new company that placed a high priority on innovation and customer satisfaction followed by crush drums review.

After making a big splash at the 2011 Winter NAMM convention, where it was awarded Best In Show among “Companies To Watch,” it seems the young Florida-based company has had no problem realizing that vision in a very short time.

But Crush’s early success is not the result of quality control and innovation alone. In addition to a full year of R&D, the heads of Crush invested countless hours into the creation of a community that focused on accessibility and outreach even before their formal debut at NAMM.

Combining the experience and market savvy of a major manufacturer with the attention to detail and complexion of a boutique builder, the company has quickly earned the affection of players and professionals around the world.

So, how do the results of Crush’s impressive initiative stack up? Let’s find out.

It took two full hours to set up the 5-piece Sublime Maple kit Crush sent me — not because the process was in any way difficult, but because I kept stopping to explore all the surprising design elements around the drums. Every component of the Crush kit featured some quiet note of visual flare or practical innovation that repeatedly took my attention away from the task at hand.

The Dark Green Sparkle lacquer finish was flawless, and while not exactly “stunning” to my eye, it quickly won my favor with an understated appeal that feels both modern and timeless. The real appeal was in the details. Among the many exciting accessories on the Sublime Maple kit were some of the most interesting isolation mounts I’d ever seen.

Crush designed the Sublime kits with small, low-mass shell hardware in an effort to increase shell resonance and to help the finish really pop. But upon further inspection of the mounts, I noticed the very sleek sculptural accents integrated into the frame that kept them from looking utilitarian. They blended right into the clean lines of the set, and just looked great.

One final element that offered additional insight into Crush’s vision was the snare drum throw-off. Surprisingly large next to the rest of the kit’s diminutive hardware, the mechanism’s bulky, stacked chevron design had me a little puzzled.

When I asked Crush rep Mike Swenson about it, he said that was one of the company’s many low-key nods to the U.S. Armed Forces. He went on to tell me about the C4 series of snare drums, from which a portion of all profits will go to the National Veterans Foundation.

It’s hard to ignore an organization that places so much importance on giving back to the greater community while also putting such a premium on product quality. But even the best intentions won’t keep a company afloat if its drums don’t sound good.

FEAST FOR THE EARS

Fortunately, the Crush Sublime Maple drum set sounded spectacular. Clean, clear, and fat, with tone for days, these drums were a joy to play from the moment I sat down. At no point during my time with the Sublime kit did I even think about muffling — wide-open, these were punchy, present drums that sounded just as comfortable in a funky organ jam as they did in a brutally loud metal rehearsal.

The 7-ply maple shells felt just a hair thicker than those I’ve seen from other manufacturers, and the triple-sanded, double-45 degree bearing edges were almost eerily smooth. I can only imagine it was that combination of features that made the Crush kit easier to tune than just about anything I’ve ever played.

The 14″ x 6″ snare was crisp, cracking and focused; the 20″-deep bass drum played like a ship’s cannon; and the 10″, 12″, 16″ toms each spoke with beautiful voices that sounded great on their own, and even better together. Table-top tight or low and loose, the Sublime Maples were a treat for the ears at every tuning.

My only real issue with the Sublime Maple series is the thus-far limited number of available sizes. I’d very much like to see a few more tom sizes, and more than anything else, shallower bass drums. The guys at Crush said they’re in the works, but I feel like this kit could be even better with an 18″ or even 16″ deep kick that would allow for more dynamic playability.

In addition to the Sublime shell pack, Crush also sent over a set of its M4 hardware series, including two 3 Tier boom stands, as well as snare and hi-hat stands. Designed with the working drummer in mind, these hefty units are a heavy hitter’s dream, each featuring their own unique set of attributes that constantly reminded me of the company’s commitment to detail.

With a 75″ maximum height and nearly a 3.5′ difference between the highest and lowest settings, the M4 3 Tier boom stands should be able to accommodate any player’s preferences. But perhaps the most exciting feature of the M4 Boom is the toothless cymbal tilter up top.

Allowing for infinite adjustability and fine-tuning, these smooth operators are made even more manageable with the addition of a spring-loaded, large-grip toggle that can be moved out of the way with a simple ratchet-like motion.

Zeroing in on my ideal height and making sure it stayed there was easy with the integrated mating memory locks on each stand (a steel tab on the underside of each memory lock fits into a receiving port at each adjustment point). However, for players who find themselves frequently adjusting stands and settings, the sleek-looking locks can become a tad bit tedious as any changes require loosening the main wing nut and the memory lock’s key bolt.

The M4 snare stand was a sturdy, uncomplicated piece of hardware that makes it easy to get your snare drum where you want it as quickly as possible. Using the same toothless tilter found on the 3 Tier boom stand, the stand made it easy to find a comfortable angle without issue.

I also found, unfortunately, that applying a fair amount of pressure to that tilter can cause it to slip significantly. I often lean on the snare while playing cross-stick, and doing so left me scrambling to bring the drum back up to playing height after it had fallen a full 90 degrees forward.

Finally, the M4 hi-hat stand was so smooth and reliable, I almost forgot about it entirely. One of the only things I found troubling was settling on a comfortable position for the three-legged base. That is, until I realized that one of the legs could be removed by unscrewing a couple of key-top bolts (excellent!). The only other setback I noticed was that I could not easily fold the footboard up for travel, but that was hardly enough to keep me from enjoying this stellar stand.

With extraordinarily smooth action and a sleek, brushed aluminum and textured black steel look, the M1 packs quite the punch all around. Right out of the box, this pedal had me playing rapid-fire figures that I’ve never been able to conquer on my own model. And, with seemingly infinite adjustability, I was able to fine-tune the M1 for maximum speed, finesse, and facility in a matter of moments.

I have only two gripes with this otherwise sterling machine. First, I could find no way to easily remove the tension springs from the axle, forcing me to remove the beaters before packing up – which wouldn’t have been much of an issue if not for my other minor grievance with the M1; The bolts used to hold the beater shaft in place actually face the bass drum, rather than the footboard.

Meaning, every time I set the pedal up, I had to slide the beaters roughly into place, then wedge my hand and a drum key into the small space between the cam and batter-side head while pressing the beater into the head to make sure it struck flush.

While I was initially bothered by the aforementioned issues, I quickly forgot about them when it came time to sit down and play. I found this to be such an enjoyable pedal that I wouldn’t even think twice about letting such petty issues keep me from making the M1 a permanent part of my setup. This is a truly remarkable unit that proves this young company has a lot to offer. 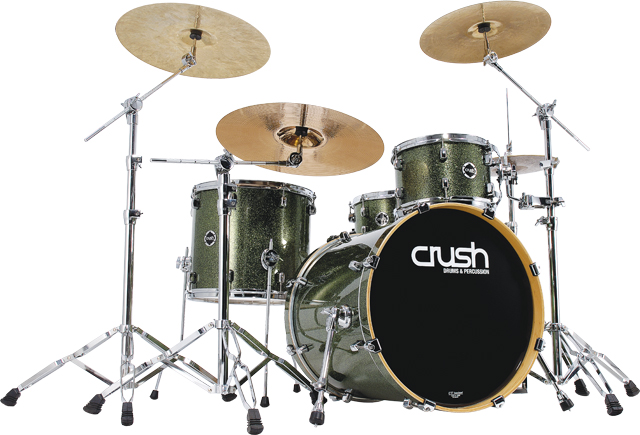 When I asked where the Crush name came from, I was actually given a few different answers, but one stood out: “Sometimes drummers, after a really great gig, say they ‘crushed it’. We wanted to crush it.” Well, after spending a lot of time with these drums, I can happily say that they are indeed crushing it.

Despite a few minor hiccups expected of a brand-new company, this drum and hardware assortment was a very impressive showing from such a young manufacturer. If a company that hasn’t even been around a full two years can put together something this exciting, I can’t wait to see what the future holds.