The Music Of Cream is not a cover band. It could be called a tribute band, but what other tribute bands include relatives of the original band members? With Ginger Baker’s son Kofi Baker on drums and Eric Clapton’s nephew Will Johns on guitar, this is the closest one can get to seeing Cream live in 2020. But it’s their musicianship and playing styles, not their relationship to the original band, that makes their shows seem like such a time warp. So, when I tell you I saw Cream perform Disraeli Gears, start to finish, in The Grateful Dead’s California back yard last week, I am not pulling your leg—though I may be still recovering from time traveler’s “jetlag.”

The show was at Bob Weir’s beloved Sweetwater Music Hall on Friday, March 6. I brought a Cream expert with me to the show: My dad. Cream was his favorite band growing up, and he says he wore out his copy Disraeli Gears from playing it so much as a teen. Yet, he expressed trepidation when I invited him to come to the show. The original band was so good, he explained, there was no way this group could hold a candle to the original power trio that formed the foundation of blues-rock in 1966 with the release of their first album, Fresh Cream, and cemented their status as legendary players and songwriters with the follow-up Disraeli Gears a years later. Well, after hearing Strange Brew and Sunshine of Your Love back to back in that small Northern California club, he was glad he came.

Baker sounded like Baker throughout the night, rarely playing the same parts the same way twice throughout each song. He sang the songs his father wrote and sang, including “Blue Condition” in the first set and “Do What You Like” in the second half, which was followed by an 11-minute drum solo. That solo captured the club’s ears. It was composed but freewheeling, with defined parts that felt connected and never left the beat (thanks in large part to Kofi’s left foot on the hi-hat). Ginger considered himself a jazz drummer, but as he mentions in our kit tour video above, Kofi was a rock drummer first, and it showed in this hard-hitting solo. 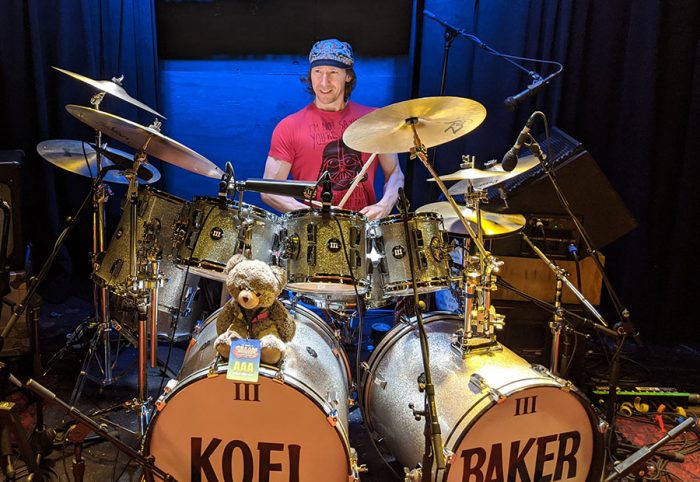 Kofi Baker plays a kit very similar to his dad’s in The Music Of Cream.

Speaking of the kit, Kofi plays a silver sparkle WFLIII drum set in a configuration just like his dad’s. WFLIII was started by Bill Ludwig, whose grandfather started the original Ludwig Drum Company. The drums are made in the old Ludwig style with modern upgrades. Kofi also plays Zildjian K cymbals, with hand-drilled holes for rivets in the 20” ride and 18” crash-ride.

While Ginger had to settle for what was available at the time in terms of hardware, Kofi can choose from just about anything under the sun. That’s why Kofi Baker plays Peace drum pedals (no, really, he does). We both weren’t sure if Peace even makes hardware sold in the US anymore, but he’s had his two single bass drum pedals for over 10 years. The footboard on the right one is sanded down smooth to allow him to play doubles and triples easier, and they have held up to his ferocious playing on several tours. We had a good laugh about it, but he honestly likes them and it’s hard to argue with the results.

Speaking of sliding foot pedals, Kofi wears specific shoes for drumming. At showtime he slips into a pair of black leather dress shoes—not just for the dashing look, but the flat leather sole slides effortlessly on that sanded footboard. To say Kofi knows his craft is a laughable understatement.

Kofi a few lessons over the years from his father. They didn’t always get along well, but Kofi seems to have made peace with him toward the end of his father’s life. Regardless of their relationship, young Kofi soaked in all he could from his dad’s playing, especially his knack for polyrhythms and how to use them tastefully to make the music more interesting (as opposed to distractingly or as the major focus of the song).

While the second half was made up mostly of Blind Faith songs and other Clapton hits, it was Baker’s drumming that tied the evening together onstage. Johns’ phenomenal guitar playing led the way, but there would be no way to lead without Baker’s frenetic, jazzy, polyrhythmic rock drumming.

My expert for the evening remarked that if he closed his eyes, he couldn’t tell it wasn’t Ginger Baker behind the kit that night. His excitement and appreciation for music he never thought he’d hear again live was beyond infectious, and I ended up listening to Cream on my record player and in live performances on YouTube all weekend. While I may not have inherited a supernatural drumming ability from my father, I sure did inherit the appreciation for it, and for the music of Cream—50 years after their last notes were made.