Charlie Watts: In His Own Words

With The Rolling Stones celebrating their 50th (5-0!!) active year together as arguably the biggest rock band ever to grace the planet, you’d think their 71-year-old drummer, the dashing music icon–slash–horse breeder–slash–cancer survivor Charlie Watts, might be inclined to kick back on his laurels and revel in a job well done. But you just can’t keep this man off a drum set and the all known Charlie Watts cymbals.

His side projects, of which there have been many over the years, tilt decidedly toward jazz — the style in which Watts originally cut his teeth. His latest, The A, B, C & D Of Boogie Woogie, is no different. It’s a quartet he formed with life-long music pal Dave Green (bass), Axel Zwingenberger (piano), and Ben Waters (piano, vocals), dedicated to reviving the lost art of its namesake style. Their latest release, Live In Paris, was recorded in September 2010.

In His Own Words 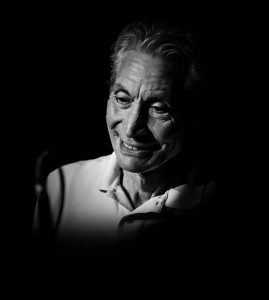 Ben Waters really got this together. I played with David Green since I was 15. We lived next door to each other when we were five, I think. So I’ve played with David a lot. And Dave and I had played with Axel on a television show [about boogie woogie piano], A Left Hand Like God, in the mid-’80s. Rather like my own jazz projects, I play this as a way of keeping my chops going while I’m not playing with The Rolling Stones.

And it’s very enjoyable. The music is a lot of fun. I play with this band because A) they’re fairly good at what they do — if you play the first track [off Live In Paris]you can hear just how good Ben and Axel are, without anybody else with them. And the other thing I like about this band is it’s very unusual: It’s two grand pianos, a jazz bass player, and me. You never see that anymore. In fact, it was only ever popular in the late ’30s when Albert Ammons and Pete Johnson did it.

Boogie woogie was a very popular form of music from the late ’30s to the mid-’40s, and there were numerous hit records made. Tommy Dorsey made one. Benny Goodman did a great one called “Roll ’Em.” It’s a style of piano playing. It’s died out now. But during the swing era it was a great style of playing for certain songs.

Boogie Woogie And The Stones

Ian Stewart [with whom Watts played in the short-lived ’80s side project Rocket 88] was a boogie woogie piano player. He was in The Stones when I joined them and he played with The Stones all the way through his life. And I favored a lot of it. Not me playing it but the sound of it.

It’s like this: Keith [Richards] copied Chuck Berry. I copied Freddie Below. And Stu would be Johnnie Johnson. When we would do things like “Live With Me” or “Rip This Joint,” that’s Stu playing. And he’s playing whatever he’s playing, which is probably a cross between Lionel Hampton and boogie woogie. But Lionel Hampton played boogie woogie, so …

Right Tools For The Job 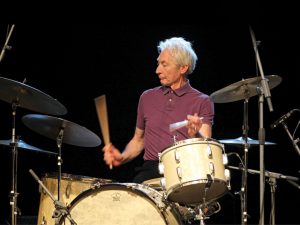 I use a ’57 round badge natural maple wood Gretsch with The Stones. And with this and most of my jazz things I use a 1960 round badge, black, small kit. The Tony Williams, I call it. It’s the one Tony used. It was like his signature drum kit when he was with Miles. And that’s why I play it, because of him, really. And in Europe when I play I use a 1940 Radio King set with a big 24″ bass drum, and huge tom toms.

That’s because Axel’s brother is a drummer, and I borrow his drum kit. I have one too, actually, but I usually use his in Europe. And when I play in clubs in England and when I’m in New York I probably use a round badge Gretsch from the ’60s. I have the same hi-hat and ride cymbal with both, and I have a special cymbal, a Zildjian [Mel Lewis] Swish Knocker, and a thin crash that Zildjian gave me. My ride is an 18″ UFiP flat ride, and I’ve never found one as good as it.

The Case Of The (Still) Missing Hi-hat On The Backbeat

I never knew I did that until Jim Keltner saw me play in 1970. He asked me why I did it, and I didn’t know what he was talking about. And I still don’t know what it is, and I still don’t know I’m doing it. People have asked me to explain why I do it. The only way I can imagine is I play [traditional grip] with my left hand. And maybe it’s a way of getting one hand to make the backbeat bigger. I don’t know. It’s an unconscious thing.

Tuning Out The White Noise 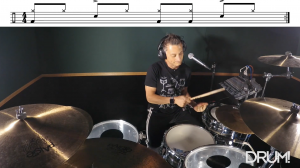 I don’t feel [overexposed] at all. I never think about it, to be honest. It’d drive you mad if you did, or you’d be frightened to go out the front door. Half the time people talk about things [I do in my playing], I’m not aware I do it, or am it, or whatever they talk about. Then I have to look at it. But I’m not actually aware of it and it certainly doesn’t take up much of my life. I’m very fortunate; many people are very nice to me so it’s not really a problem.

I’ve done concerts with Jim Keltner standing behind me, and in the audience is Roy Haynes and Earl Palmer. Yes, you’re going to be thinking, “My God, what do I do next?” But they’re not like that, and they don’t do that to you, so you just hope that they enjoy it. You can’t stop the show and say, “I can’t play tonight; I’ve got Jim Keltner, Roy Haynes, and Earl Palmer looking at me.” You have to carry on, and you hope that the show’s good, and they enjoy it. You have to do the show that’s in front of you.

When you’re starting out you just want to play, and I still love that, playing and being up there. I wouldn’t do it otherwise. And the problems don’t change, you know. [laughs] They’re still the same. You still have to do an hour and a half or whatever you do. And if the sounds are good and you’re comfortable where you are, then it’s easy. If you can’t hear and it’s horrible sounds, then it’s hard work. And you can’t wait for the end of the show.