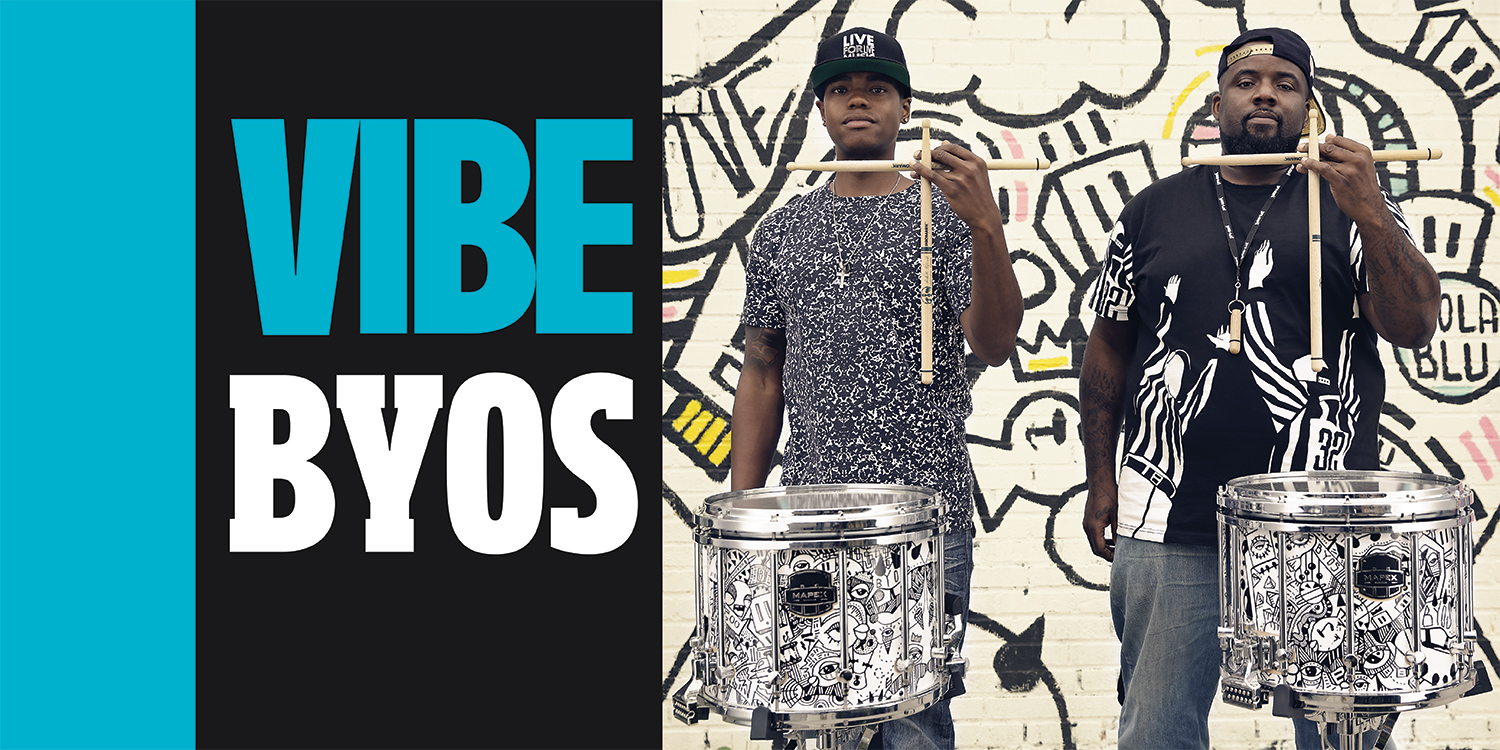 Thanks to the Internet, and online social video sites like YouTube in particular, there’s a ton of talk in creative communities across the globe about the disintermediation happening today between artists and their target audiences. Because the technology required to create media-based art (i.e. photography, animation, music, and video) is constantly becoming cheaper and easier to acquire, and since the methods to distribute that art globally have essentially become free, many artists are beginning to find it difficult to rise above the ever-growing groundswell and incessant chatter that is being generated online.

Fortunately, for artists who have diligently cultivated their own skills and discipline to create, release, and promote their work on a consistent basis, the possibilities of building your own place in the world are as real as the Earth that you stand on. One of the greatest modern-day examples of this ideology is the drumming and visual performance duo known as BYOS (which stands for “Bring Your Own Style”).

Ralph Nader and Harvey Thompson met as kids at a friend’s house in Brooklyn, New York in the early 2000s. Through an after-school music program called the Jackie Robinson Center “Steppers” Marching Band, the pair was able to develop a style that combines rudimental snare drumming with flashy, highly engaging visual performance art. Through the encouragement of an influential teacher, Timothy Green, the duo also learned other important skills like music reading and theory. Later, they would continue their formal musical studies at different colleges: Ralph Nader at Hampton University in Virginia and Harvey Thompson at North Carolina A&T University. (Nader also marched for several summers with the Concord Blue Devils.)

But it was their stints in game-time drumlines for the New York Knicks and New Jersey Nets basketball teams that birthed the concepts and routines that would later become BYOS. “That helped us learn how to create [a routine] in a short amount of time and be able to stick with it,” Thompson explains. “It also helped us with creating short pieces because, in the NBA, you have 30 to 60 seconds to run out onto the court, play, and get off. You can’t run onto the court and just do flam drags and hertas, because you’ve got an audience that’s [way up in the stands] and they won’t understand it. You’ve got to get out there, do something nice and flashy, dance, dance, dance, and get out!”

While touring with the German reggae/pop band Seeed, Nader and Thompson began a daily ritual that would lay the foundation for what has become the BYOS online platform. While on tour, the duo used their downtime in Europe to start what they called “A Lick A Day.” Their process was simple and straightforward: They would learn a new musical routine after dinner and practice together all night, then wake up the next morning and do a video shoot in their current location. Finally, they edited and uploaded the video to YouTube before dinner. Once the process was complete, they would “rinse and repeat” for the remainder of the tour. Having attracted millions of viewers and 55,000+ YouTube subscribers, the two embarked on a nationwide tour of schools and Guitar Centers across the United States.

They also worked with Promark to create one of the most unique signature marching drumsticks to date. “The secret is the weight distribution,” Nader says. “Since the stick is perfectly balanced and aerodynamic, the rotation [during flips and tricks] is smooth and even. The oval barrel tip gives you a strong, uniform tone at any angle, especially during crossovers [and other stick tricks].” Thompson adds, “The groove and the black-rubber band [on the butt end of the stick] together give you an extra grip so the stick doesn’t slide out of your hand. Also, from a distance, everyone knows that it’s our BYOS stick.” Nader proudly interjects, “It’s also the first stick with two signatures on it! Just to be on a stick with your best friend, that is priceless, a real blessing.”

In talking about their uniquely musical approach to rudimental snare drumming, both live and on video, Thompson explains, “When we perform, it’s not just about the drumming. It’s our freedom of expression. We’re being expressive with all of the motions: the body, the head movements, the facial expressions. Everything plays to that one factor: Expression.” Nader jumps in, “Many times, we watch the video without the audio and ask, ‘Is this still entertaining?’ If it’s not, then we have something to change.”

For those viewers who may not know a paradiddle from a pataflafla, BYOS’s use of current pop and hip-hop hits from popular artists like Bruno Mars, Skrillex, Calvin Harris, and Diplo makes for an immediate and familiar musical connection with their wider, non-drumming audience. “We try to keep our videos as clean as possible so that, if a kid sees a video he likes, he can watch it in front of his parents,” Thompson says. “You don’t want [a parent] to say, ‘Oh no, turn that off. That song is too bad.’”

Their heartfelt connection with their audience sets the BYOS duo apart from most YouTube sensations. Thompson says, “We really want to help build a general appreciation for the arts.” As more and more school-based arts and music programs are being shut down, Nader says, “Kids are being left at home with nothing to do except play video games. So we’re encouraging kids to take a drum pad and go outside. Drum with your friend. Or, if you have a friend who’s a dancer, work on something together. There are so many ways to spend your time and be creative. Just go out and play!”

When asked about their advice for up-and-coming drummers, musicians, and other creative people, Nader offers this last thought for those following in BYOS’ footsteps: “Create your own masterpiece and just put it out into the world. You’ll start getting support from your family and close friends. And then some of those people will share it. If you stay consistent and keep putting out a good quality product, that following will continue to grow.”

Gleaned from a video clip of their performance at PASIC 2013, Ralph Nader and Harvey Thompson of BYOS demonstrate why they’ve become YouTube sensations. Here, the dynamic duo plays in a relaxed but articulate way to a medley of hip-hop flavored backing tracks. The first phrase is in unison: seven bars of consecutive rights or lefts, followed by a one-measure syncopated fill. The next three bars involve diddles shared between the two drummers with some overlap in the second measure of this phrase.