The common wisdom is that drum machines are dead, and that all hardware has totally been replaced by software. Well, not so fast, boys and girls. There have always been certain units that stay in style due to a great price-to-performance ratio, a unique sound set, a comfortable human interface, or some other aspect that makes them totally unique including Alesis SR18.

Alesis has been making drum machines since its HR16 hit the market in 1987, and they are as desirable now as they were back then.

The second-generation Alesis SR16, introduced back in 1990, was one of the most successful drum machines ever placed in production. In fact, it’s still in production. At first glance, it seems that the 16 and the newer SR18 were cut from the same cloth. There is the big jog-wheel in the upper-right corner, and 12 trigger buttons along the bottom. And when you’re looking at the display, you’ll find familiar values in familiar areas.

But the company’s latest SR18 doubles the polyphony (now 32 voices instead of 16), the sounds (more than 500 vs. 233), the number of drum kits (200 rather than 100), and uses a better 16/24 sample/DAC bit resolution than the older unit’s 16/18. While these improvements are internal, a closer inspection will reveal some external structural changes too.

The SR18 sports a new tap/tempo button, and a completely new row of buttons to select drum, percussion, bass, pattern play and roll. Even with the new features, if you’ve been comfortable with the SR16’s front panel, you’ll find yourself in familiar territory when working with the SR18.

The back panel contains all the standard inputs and outputs necessary to make the machine the centerpiece of a drum programming system. There’s a MIDI-In and MIDI-Out that doubles as a MIDI-Thru, and instrument input that can be used to blend outside sounds with the SR18. Audio outputs include both a main Left and main Right output along with an Aux L/R that can be used as an individual out.

To complete the outputs, you’ll find a 1/4″ headphone jack. Many users of the SR16 enjoyed the way the unit could be used in live performance with a pair of footswitches to control start and stop, along with pattern selection. The SR18 keeps these inputs, allowing more flexible operation by guitarists, keyboard players, and even drummers who might want to add a drum machine to their live-performance rig.

Normally, the pads on a drum machine trigger drum sounds. That’s why they’re there. But, the 12 performance pads on the SR18 can be used in two different modes. In Pad Play mode, the buttons operate like any other drum machine, with each pad firing a different sound. But, in Pattern Play mode, each of the pads can be programmed to trigger a pattern rather than a sound. While not every user will need this feature, it could come in handy under certain circumstances.

Another feature that sets the SR18 apart is its equal emphasis on drums, percussion, and bass. Since bass and drums are “joined at the hip,” this is a great feature. By selecting one of the three instrument layers, the 12 pads will fire sounds from a drum kit, sounds from the percussion sound library, or bass sounds.

In reality, you can assign percussion sounds to the drum bank, and visa versa, but the bass sounds are available only when the pads are in bass layer mode. You can think of the SR18 as 3-track recorder, and a convenient mute button allows you to toggle any or all of the three tracks on and off – a great practice tool! 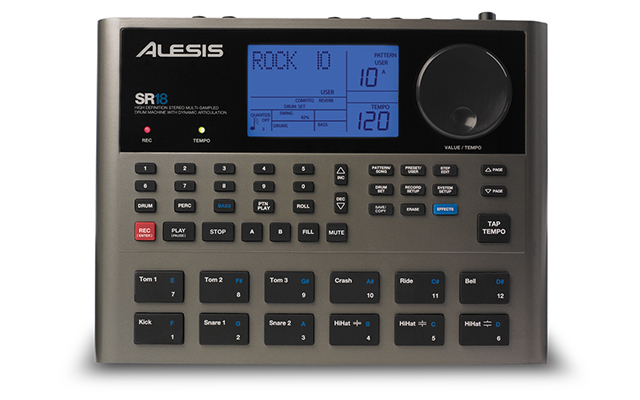 The SR18 comes with a boatload of sounds including 71 kick drums, 99 snares, 89 hi-hats, 78 toms, 65 cymbals, and 169 various percussion voices. Each category of instrument is further divided into a number of sub-sections. For example, snares are broken down into acoustic snares, brush snares, rimshot and side-sticks, hip-hop snares, vintage snares, legacy Alesis snares, and vocal and sfx snares.

The purest way to audition sounds is to remove all the effects and give each a good, hard listen through a killer set of headphones. After an intense listening session, I found the entire sound set to have much more punch and clarity than Alesis’ older drum machines. As you might expect, the SR16’s sounds, while completely useable, were getting a little long in the tooth. The 18’s sounds have a fresher quality that haven’t yet been used to death.

When you need to sculpt your sonic palette, the SR18 offers all of the basic tweaks. You can adjust the overall volume of the sound assigned to the pad, the sound’s stereo position (seven different positions), the tuning (more than a two-octave range in half-steps), the decay envelope, and a filter that attenuates the higher frequencies.

Overall, the effects included on the SR18 sound good and offer both standard sweetening and effects with a little more edge and attitude. Effects can’t be added to each individual sound, but are applied to all the drum sounds in a kit. You can, however, turn the effects on or off on a per-pad basis. In all, there are 22 different types of reverb types and 14 different types of compression and EQ.

The SR18 has the ability to store 200 different drum sets in memory. Each set is the collection of drums, percussion, and bass sounds, along with their mix and effects parameters. The machine comes with 100 faculty sets and you can create 100 of your own. You might think about these sets as being similar to the patches on a synthesizer.

One the strengths of this machine is the inclusion of 50 different bass sounds. Bass voices include several different types of electric basses both picked and slapped, along with some pretty darn good acoustic basses that would be right at home in a straight-ahead jazz tune.

A strong selection of dance-style and techno basses round out the offerings. Programming the correct notes on the bass layer with buttons is not as easy as you might think, but with a little practice, you can concoct some pretty convincing lines and grooves.

Most drum machines operate in a similar manner. You record patterns by playing the pads on the front panel or by MIDI’ing an electronic kit (or keyboard) into the unit. Once you’ve programmed a number of patterns, you create an entire song by simply linking patterns together in a chain.

Learning how to create patterns and songs is sometimes tricky, especially for the new user. I found the SR18 to have a workable balance between ease-of-use and a complex feature set. While the operating system of the SR18 isn’t totally obvious, once you take an expedition through the manual, you’ll find that most commands are logical and easy to remember.

In the Record Setup area, scrolling through different pages allows you to arrange the quantize level from quarter-notes to thirty-second-note triplets to “off” (96 ppq resolution), adjust the gate time, swing amount (off, 54 percent, 58 percent, and 62 percent), click select (click note value), click volume, velocity (with eight fixed amounts along with soft, medium, and loud), number of beats in a pattern (from 1—24 beats), note value (quarter, eighth, and sixteenth), and pattern length, offset (shifting a sound ahead or behind the beat from +/- 00—384th note), and pattern name.

All the required features for programming are available. You can copy and append patterns, as well as erase any note or an entire sound from the pattern. If you don’t want to program in real-time, you can enter step-edit mode and build your pattern one event at a time.

As you might expect, creating songs is not much more than stringing patterns together. However, the SR18 makes it easy by allowing for real-time song programming or step editing. There are commands for adding a fill or removing a fill; inserting, deleting, or replacing a step; and changing tempo in the middle of a song.

I love the fact that the machine can run on 6 AA batteries! The SR18 is small enough to fit in just about any backpack, and at less than 5 lbs., the program-on-the-run factor is outstanding. The headphone output is HOT. You won’t have any trouble hearing this machine in even the loudest environment.

All in all, the SR18 is a welcome upgrade to the Alesis drum machine family tree. The sounds are fresh, the interface is logical, and the incorporation of great bass sounds is a unique twist. With its low price, I’m sure that Alesis has another hit on its hands. Give it a test ride at your local dealer and see if it fits your needs.